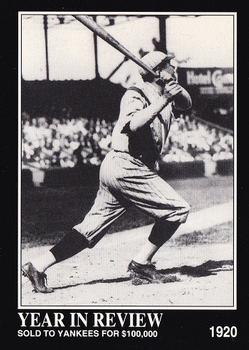 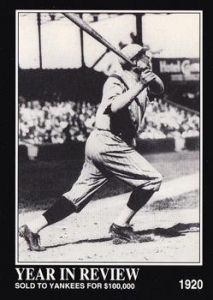 New York’s American League team, known as the Highlanders in the earliest years before morphing into the Yankees, was mostly moribund in its first decade and a half. Only twice, in 1904 and 1906, did it even challenge for the flag. The Yanks finished third in 1919, 7½ games behind the pennant-winning Chicago White Sox and 4 behind the second-place Cleveland Indians.

The Yankees battled these teams again in 1920, but this time their arsenal employed a new weapon. They had purchased a pitcher-turned-hitter, Babe Ruth, who had set the single-season home-run record of 29 with the Boston Red Sox just months earlier.

Playing half his games at the homer-friendly Polo Grounds, Ruth was transforming baseball and attracting fans to see him; the Yankees more than doubled their home attendance from 1919. Ruth was also on a tear to shatter his not-even-a-year-old home-run record.

In early July the Yankees made a road trip to Philadelphia and Washington. Ruth used his own car to get to the cities, and the Yankees concluded with a 17-0 win over the Washington Senators on July 6, putting them in first place by one game over Cleveland.

The team headed home to start a series against the Detroit Tigers. For the journey from Washington to New York, Ruth was accompanied in his car by his wife, Helen, teammates Fred Hofmann and Frank Gleich, and coach Charley O’Leary. In the early hours of Wednesday, July 7, the group was outside Wawa, Pennsylvania, west of Philadelphia, when the car went off the road and overturned.

Reports vary as to whether the occupants were thrown from the car or pinned underneath. The Philadelphia Inquirer reported, “By a herculean effort, Ruth tilted the car sufficiently to permit his wife to crawl from beneath. Then the three ball players crawled out and then raised the motor high enough to permit Ruth to be pulled from beneath it.” The party went to a nearby farmhouse, then walked a mile to Wawa, took a 5:34 A.M. train to Philadelphia and, from there, another train to New York. As for the car, it was towed away with Ruth giving instructions to sell it.1

The Yankees had the day off on July 7, leaving time for Ruth’s banged-up knee to heal as the team prepared for the beginning of a 21-game homestand. While the knee ached, Ruth was hampered more by a sore left wrist, which he hurt while sliding in the Washington series.

Another injured star, an opponent, drove in the winning run in the Yankees’ first game back home. On July 8 Ty Cobb pinch-hit and singled in the ninth to lead Detroit past New York and knock the Yankees out of first place. It was Cobb’s first time up since he hurt his knee on June 6.

The Knights of Columbus honored Ruth, one of their own, before the July 9 game. Ruth had become a Knight – with the Pere Marquette Council in South Boston – while he was with the Red Sox.2 It wasn’t unusual for Knights councils in New York, and perhaps elsewhere, to honor him. For this Babe Ruth Day in New York, a local council presented him with a diamond-studded watch fob while the Knights of Columbus band played.3

The game began at 3:30 with 37-year-old Jack Quinn4 on the mound for the Yankees. The only baserunner he allowed through the first two innings came on a throwing error by third baseman Bob Meusel. However, in the third, Detroit shortstop Donie Bush squeezed home Eddie Ainsmith to give the Tigers a 1-0 lead.

In the bottom of the inning, Red Oldham retired Quinn but then walked Chick Fewster and hit Sammy Vick with a pitch. Wally Pipp hit a grounder behind second base. Shortstop Bush fielded it and tried to step on second in time to force Vick, but umpire George Hildebrand called the runner safe.5 Bush argued and pushed Hildebrand, but somehow didn’t get ejected. However, second baseman Ralph Young was tossed out when he kicked his glove into center field.

Bob Jones took Young’s spot at second as Ruth stepped in with the bases loaded and one out. Ruth hit a line drive to right that handcuffed Harry Heilmann, who dropped the ball. Heilmann recovered in time to throw to Bush and force Pipp at second, while Fewster came in from third to tie the game. The official scorer determined that Heilmann would have been charged with an error had he not forced out Pipp, so Ruth did not get a hit. The scorer also judged that had Heilmann caught the ball, Fewster could have tagged and scored. As a result, under the scoring rules, Ruth was credited with a sacrifice.6

Meusel was the next batter, and he pounded a three-run homer into the lower stands in right field that broke the tie and put the Yankees ahead 4-1. The lead went to 5-1 in the fourth as Fewster singled in Del Pratt, and Ruth led off the fifth.

Ruth hit the ball even harder than in his previous at-bat and this time did it with more lift, sailing it into the upper deck in right. William B. Hanna in The Sun and New York Herald described the home runs in this way: “The Babe and Meusel were knocking them out of their seats. There is more truth than metaphor in that statement. The Babe spilled a home run against a pillar in the upper stand and had the fans up there dodging, and Meusel made them scatter in the third inning, when he lifted a homer into the lower stand.”7

The home run was Ruth’s 25th of the season, putting him within four of the major-league record he had set the year before. As he came around the bases, he tipped his hat toward the stands where the Knights of Columbus were seated.8

Meusel wasn’t done yet. The Yankees put a run across in the sixth with Pipp on second and Ruth, having walked, on first when Meusel drove a double to right-center, scoring both runners and completing the New York scoring.

The Yankees threatened in the eighth despite losing two runners on the bases, Fewster when he was caught stealing and Pipp when he was thrown out trying to stretch a single. Vick stood on third when Ruth came up, and the fans hoped for another home run. The Sultan of Swat hit a shot that went over the right-field roof but not before the wind blew it foul. He then grounded out.

New York took a 9-1 lead into the ninth, but Quinn had some trouble getting the final three outs. Bobby Veach led off by reaching base when Fewster made a low throw to first on his grounder. Heilmann tripled to score Veach, although he also hurt his ankle on the play and was replaced by pinch-runner Larry Woodall, who came home on a groundout by Babe Ellison.

Babe Pinelli got on with a bunt single and went to second when Quinn threw the ball away. The Tigers were down to their number-eight hitter, and Polo Grounds fans began clamoring for Cobb. However, Ainsmith hit for himself and grounded out. Once more the calls went out for a pinch-hitting appearance by Cobb, but instead Ira Flagstead came up for Oldham and grounded out to end the game.

“Old Jack Quinn, who is maturing gracefully, which same his pitching proves, slid and sped the ball past the couchant Tigers with such effect that they had little chance to win,” wrote Hanna in the Sun and Herald of the right-hander’s performance.9

The Yankees stayed a half-game out of first as Cleveland also won. They battled in a three-way race with the Indians and White Sox and stood atop the league for a few days in mid-September. New York dropped out of first after being swept in a three-game series with the White Sox, and finished in third place, three games behind Cleveland and one behind Chicago. Ruth broke his own record with a seemingly insurmountable 54 home runs.

But as the Roaring Twenties would demonstrate, nothing would be insurmountable for Ruth, the Yankees, and baseball.

4 In his SABR biography of Jack Quinn at sabr.org/bioproj/person/cf88d73c, Charles F. Faber discusses the uncertainty of Quinn’s age, especially during his career. Faber says the most likely birth date is July 5, 1883, for Quinn, who pitched beyond his 50th birthday.

5 Newspaper accounts vary on whether Vick beat Bush to the base or whether Bush missed the base.

6 Ruth had hit a sacrifice fly under the rules, although sacrifices and sacrifice flies were not then distinguished in separate categories.