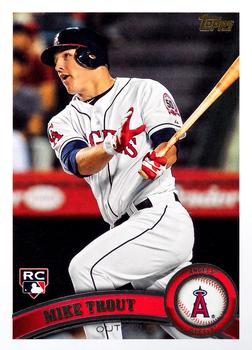 The Seattle Mariners, with a record of 43-46, had lost three in a row, including two against Anaheim each of the preceding evenings in their series. But in a tight AL West Division, playoff hopes were not dead for the new Seattle skipper, Eric Wedge, and his team. The best embodiment of this was their rookie second baseman Dustin Ackley, a first-round pick who would finish sixth for the Rookie of the Year Award that year. The young player from North Carolina was off to a hot start, with an OPS well above .800. On the mound that night was another rookie: Michael Pineda. Despite his 8-5 record, he led the team in ERA with 2.58.

The home team also featured some young talents. Among them, Mark Trumbo, a powerful first baseman who finished second in votes for the Rookie of the Year Award in 2011, and Mike Trout, selected by the Angels in the first round of the 2009 draft when he was 17 years old. Trout had just joined the team to replace injured center fielder Peter Bourjos. This was his first season in the big leagues, and he had yet to get a hit.

To face the Seattle rookie starter, the Angels pitcher was the veteran Joel Pineiro. With a season ERA of 3.90, this season was actually his last in the majors, after a disappointing second half.

The game started at 6:07 P.M. with a face-off between the legendary Ichiro Suzuki and Pineiro. It ended in two pitches with a groundout, and the Angels starter got out of the first with a hitless inning. Pineda followed with a three-strikeout performance.

The first hit of the game came from Adam Kennedy in the top of the second. The Seattle first baseman hit a single to center field on a 3-and-2 pitch. However, the threat stopped here with Pineiro being able to retire Justin Smoak and rookie Kyle Seager. Meanwhile, the young Pineda was cruising through the Angels lineup; he finished the second inning with a total of five strikeouts while allowing no hits and no walks.

Trouble for Seattle started in the bottom of the third, when Trumbo hit a line-drive single to left field. He tried to steal second base on a full-count pitch to catcher Hank Conger, but was caught. The third-base umpire, Sam Holbrook, ruled that Conger hadn’t swing, changing a double play to a two-runners-on situation. Not happy at all with the call, Mariners manager Wedge came to the field to argue, and got ejected. He later said that it “changed the whole game.”1

Indeed, the walk brought the young rookie Mike Trout to the plate for a decisive moment. His club had a lot of hopes for the 19-year-old who had been ranked by ESPN’s Keith Kaw as the number-one prospect in baseball.2

Trout bunted the ball in front of home plate. Pineda retrieved it but threw badly to first base, offering the rookie his first major-league hit, and allowing Trumbo to score. The Angels led, 1-0.

Some relief came for the Seattle starter, as Maicer Izturis hit a fly ball to left field. The next batter up was Torii Hunter. His season wasn’t really good so far; he even described its start as “seven weeks of hell.”3 The right fielder had to deal with minor injuries, and a difficult move to the second spot in the lineup. But all these difficulties were like forgotten that night, as Hunter ripped Pineda’s first pitch to left field for a three-run home run.

Pineda was able to get out of the inning without further damage. But the Angels were now ahead 4-0.

Seattle struck back quickly in the fourth with back-to-back doubles from rookie Dustin Ackley and catcher Miguel Olivo, cutting the lead to three runs. The rally stopped there though, with the next three batters out.

But the Mariners scored again in the top of the fifth. After striking out Carlos Peguero for the second out of the inning, Pineiro allowed singles to Ichiro and Brendan Ryan. With runners on first and second base, Ackley came to the plate again. The rookie hit a ground ball to right field to score Ichiro. Next, Olivo also singled, making it 4-3 for the Angels. Despite walking the next batter, Adam Kennedy, Pineiro kept the lead safe by getting Justin Smoak to fly out.

Pineda came back to the mound for the bottom of the fifth. He quickly got Conger out, but walked Trout on four pitches and gave up an RBI double to Izturis. The next batter was Torii Hunter. After a strike and three balls, Hunter hit the ball like a rocket for his second home run of the game.

Pineda stayed in the game and, despite giving up another single, finished the inning without allowing another run. Done for the night, he was replaced by Jeff Gray in the bottom of the sixth. The Angels had a 7-3 lead, giving Pineda one of the shortest starts of his young career.4

Seattle tried to rally again, with Pineiro giving up two singles. But even with these hits and a stolen base, the Mariners were not able to score. The Angels starter finished the night after seven innings, having given up three runs on 10 hits with seven strikeouts.

The Angels didn’t stop there, scoring a run in the seventh against Gray, and one in the eighth, with Trumbo hitting his 16th home run of the season, off Chris Ray. Meanwhile, the Seattle offense struggled to create any kind of threat, hitting just two singles over the last two innings. And with that the Angels won the game, 9-3.

The player of the game was probably Torii Hunter, who joked that he was “almost in heaven.”5 His two-home-run, five-RBI performance was the best of the season for him to this date, and it started a trend that allowed him to earn a 3.6 WAR for the 2011 season. His postgame comment illustrated it perfectly: “I’m just happy with the way we play right now.”6

Surprisingly, the home runs carried the offense for the Angels. They started the season in a cold stretch, hitting just 14 over 35 games at Angels Stadium. But in its second half, they were playing with a lot more power. Skipper Mike Scioscia was happy about it, but still wanted to make sure everybody understood this was only part of their offense: “Are we going to be much better if we start hitting home runs? It’s going to add to our offense but it’s not the driving force of what this club is about.”7

With the win, the Angels were one game behind with the Rangers for the first spot in the AL West, while Seattle’s playoffs hopes faded a bit more.

The Angels finished the 2011 campaign with a record of 86-76, in second place in the AL West, but not enough to get a spot in the postseason. The Mariners were not better, finishing in fourth place in the AL West with a record of 67-95, after a rough second part of the season. Wedge stayed with the team two more seasons, but never achieved the feat of building a .500 team.

This game was a milestone in the career of Mike Trout in the form of his first major-league hit. He was elected Baseball America Minor League Player of the Year in 2011.8 He finished seconded in MVP voting in 2012 and 2013, before winning the award in both 2014 and 2016.

Meanwhile, on the other side of the country, Yankees fans were celebrating Derek Jeter’s 3,000th hit.

The 2011 SABR convention took place in Long Beach, California. As one could have expected from an event taking place near Los Angeles, it all started with a show. An improvised performance of “Take Me Out to the Ballgame” was played by SABR co-founder and director Tom Hufford the night before the convention began. This marked the start of three days of talks and panels about baseball. Among the topics discussed were baseball in Israel, Hank Greenberg RBIs, and unsurprisingly, Los Angeles-area all-time All-Stars.

Attendees at SABR conventions have a ballgame on the schedule during these three days. The 2011 edition was even more special, as it featured two games: one with the Dodgers, the other with the Angels, this game on July 9.

Besides the sources cited in the Notes, the author consulted Baseball Reference.com and Retrosheet.org, and the following:

4 Pineda also pitched five innings on May 27, 2011, against the New York Yankees.