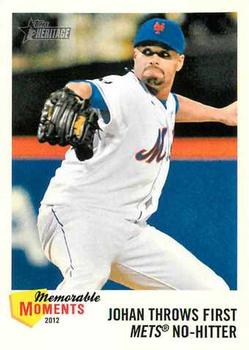 The evening of June 1, 2012, will be remembered as the night 50 years of frustration ended for the New York Mets. Johan Santana went through the St. Louis Cardinals’ lineup all evening on the way to the Mets’ first no-hitter. He walked five and struck out eight in the historic 8-0 victory. It was a triumph that marked the end of Mets’ no-hit futility that went back to the start of the franchise in 1962.1

Santana had missed the entire 2011 season due to shoulder surgery. His return had been challenging. Mets manager Terry Collins said before the game that he had planned to limit Santana to a maximum of 110 to 115 pitches that night. Santana finished with a career-high 134. “I just couldn’t take him out,” Collins said after the game.2

Santana started strong, collecting three strikeouts in the first two innings. He kept the Cardinals in check while allowing three batters to hit fly balls to the deeper reaches of the outfield. But beyond the two walks, both surrendered in the second inning, the Cardinals never came close to getting a runner in scoring position.

The Mets scored in the bottom of the fourth inning as Adam Wainwright gave up three hits and a deep fly ball to the heart of the Mets batting order. Kirk Nieuwenhuis led off the inning with the Mets’ first hit, a single up the middle. David Wright then doubled and runners were on second and third. Lucas Duda flied to deep right-center and Nieuwenhuis scored. Daniel Murphy then tripled to right field and Wright trotted home. Wainwright got out the next two batters but the Mets led 2-0.

Santana continued to pitch masterfully. He walked the leadoff batters in the fourth and fifth innings. But each time he settled down and retired the Cardinals. He collected two more strikeouts, raising his total to five.

It almost ended in the sixth inning. Carlos Beltran, making his return to New York after being traded away the season before, led off and pulled a pitch from Santana down the left-field line. The ball appeared to hit the foul line but third-base umpire Adrian Johnson called it foul. “I saw the ball hitting outside the line, just foul,” said Johnson after the game.3 If it had been fair, Beltran would have had a double and the no-hitter would have been over. After the foul call, Beltran grounded out. Santana kept his focus and struck out Matt Holliday. Allen Craig fouled out to first to end the inning.

The Mets built on their lead in the sixth inning. Wainwright gave up another single to Nieuwenhuis, then walked Wright. Duda stepped to the plate and hit another fly ball; this time it cleared the center-field fence. Three runs scored and the Mets led 5-0.

After keeping his no-hitter going on the umpire’s call, Santana almost saw it end again in the top of the seventh. Left fielder Mike Baxter, who grew up in Queens, just minutes away from Citi Field, made a fantastic catch to save the no-hitter. Yadier Molina hit a line drive to deep left. Baxter ran at full speed and did not slow down as he stepped on the warning track. He extended his glove and made the catch just before his body violently slammed into the wall. He fell but managed to hold on to the ball. He subsequently left the game due to a bruised shoulder 4

In the bottom of the seventh inning Omar Quintanilla led off with a single. After Santana sacrificed him to second, Wainwright walked Andres Torres, who had replaced Baxter in left field. Cardinals manager Mike Matheny pulled Wainwright and called in Sam Freeman from the bullpen. Freeman walked Nieuwenhuis to load the bases, then walked Wright to force in a run. Duda struck out, but Murphy singled to left and Torres and Nieuwenhuis scored. Ike Davis grounded out but the Mets were up 8-0.

In the dugout during the Mets’ seventh, Collins told Santana it would be his call to stay in the game or come out. Santana had no plans to remove himself.5 After the game he said: “Tonight he was not going to take me out of the game. No chance.”6

Santana continued his march toward the no-hitter in the eighth inning. After Tyler Greene flied out to left field and pinch-hitter Shane Robinson struck out, he crowd of 27,069 began shouting “Johan! Johan! Johan!”7When Santana gave up his fifth walk, to Rafael Furcal on his 118th pitch, Collins came to the mound. But it was a quick conversation. Santana got former teammate Beltran on a liner to second to end the inning.8

While the Mets batted in the bottom of the eighth inning, Santana sat away from his teammates at the end of the dugout, awaiting his chance at history. He had already surpassed the 108 pitches that he threw on May 8, his previous season high.9 No one on the team bothered him as he waited for his chance to go out and make Mets history.

The ninth inning arrived and Mets fans were on their feet. Matt Holliday lined Santana’s first pitch to center fielder Andres Torres for the first out. The tradition-starved Mets fans stood and roared as if Santana had just ended the inning.10 When Allen Craig popped out to Nieuwenhuis in short left, the noise grew even louder. And when David Freese, the 2011 World Series most valuable player, struck out swinging, the crowd went wild.

Santana’s teammates stormed the mound and a celebration erupted on the field and in the stands. Santana said in a postgame news conference that he had never thrown a no-hitter at any level. “I don’t think I’ve ever even thrown a no-hitter in video games,”he said.11

After Santana finished his interviews with the Mets announcers, he walked into the locker room where his teammates were waiting with champagne. “What a night for the Mets. Nobody better than Johan,” Baxter said of the two-time Cy Young Award winner.12

The Mets finally had that elusive no-hitter. Their all-time ace Tom Seaver had come close, throwing five one-hitters during his years with the Mets. After 50 years and 8,019 games, the Mets finally had one for the record books. “I know how much this means to New York and to the New York Mets,” Santana said, humbled at his accomplishment.13