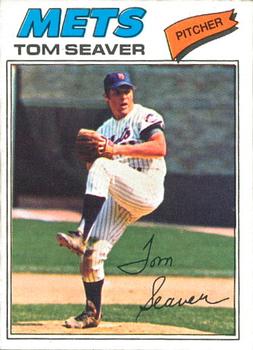 The New York Mets faced the Houston Astros in the final game of a four-game series on the night of June 12, 1977. For Tom Seaver, the Mets’ starter against Floyd Bannister, it was his last game before being traded to the Cincinnati Reds. Both teams had losing records and the Mets needed a win to split the series. Joe Torre put his ace on the mound for the game and Seaver came through with a complete game win.

Even with all of the trade rumors, Seaver’s performance did not show that he was bothered by the rumors as he pitched that evening, just days before what would become known in New York sports circles as the “midnight massacre.”1Seaver told the New York Times on June 13th that he would be open to a trade to the Reds as a result of the rancorous contract negotiations that had been taking place.2 Two days later, he joined the Reds.

Seaver got off to a slow start. The first batter, Cesar Cedeño, hit a triple to left field. Cedeño scored two batters later when Jose Cruz hit a sacrifice fly to Mike Vail in right field. This would turn out to be the one hiccup in an otherwise excellent performance from Seaver that evening.

The Mets hitters did not help Seaver for the first seven innings. They didn’t even get a hit until the fourth inning, when John Milner hit a single to left field. Milner moved to second base when Dave Kingman bunted down the third-base line for a single. Although the Mets now had a runner in scoring position, Bannister got the next three batters out in quick succession. All three batters hit fly balls to the outfield. Two were easily caught by center fielder Cedeño and the other was caught by Willie Crawford in left field.

The Mets finally scored in the top of the eighth. Felix Millan led off the inning with a single to right field. Seaver bunted down the first base line. Bannister’s only play was to first base, and Millan got to second. Lenny Randle hit a single to center field. Cedeño threw home but Millan beat the throw. The score was tied and Randle moved to second base on the throw to home. Bud Harrelson grounded out to the second baseman and Randle moved to third. With Milner batting, Bannister threw a wild pitch and Randle scored. The Mets were now ahead 2-1. Bannister struck out Milner but the damage was done.

It turned out that these two runs were all Seaver needed. He got the side out in the bottom of the eighth inning. Former Met Ken Boswell, who was pinch-hitting for Bannister, grounded out to the second baseman, Cedeño hit a fly ball to center field and Seaver struck out Enos Cabell for his sixth strikeout of the game.

The Mets added an insurance run in the top of the ninth inning off reliever Gene Pentz. After Kingman struck out, Vail singled to right field. John Stearns doubled to left field and Vail scored on the long hit in the cavernous Astrodome. Pentz recovered his composure and got the next two batters to ground out.

In just over two hours, Seaver turned in another solid performance. Three days later he joined the Cincinnati Reds as his contract negotiations fell apart. The Mets sent Seaver to the Reds for Pat Zachry, Doug Flynn, Steve Henderson, and Dan Norman.3 Besides trading their star pitcher, the Mets also sent their home-run leader, Kingman, to the San Diego Padres for Bobby Valentine, a utility infielder, and Paul Siebert, a pitcher fresh from the minors.4

Seaver’s last outing for the Mets came in front of 10,439 fans at the Astrodome. The next opportunity for Mets fans to see him would not come until August 21, when he returned to Shea Stadium as a Red. Bill Madden, a security guard at the door to the Mets clubhouse, told newspapers that “You know what they want to see, don’t ya? Tommy pitch a perfect game and the Mets win.”5 Mets fans had to settle for seeing Seaver show why he was the anchor of the Mets pitching staff for the previous 10 years. Seaver pitched another complete game and struck out 11 batters as the Reds won, 5-1. It would be another six years before Mets fans could cheer for “Tom Terrific” once again. Traded back to the Mets in December 1982, the 38-year-old Seaver was 9-14 for the 68-94 Mets in 1983. After the season he went to the Chicago White Sox as a free-agent compensation pick, and spent three seasons with the White Sox before finishing his career with the Boston Red Sox.

In addition to the sources cited in the Notes, I also used the Baseball-Reference.com, Baseball-Almanac.com, and Retrosheet.org websites for box score, player, team, and season pages, pitching and batting game logs, and other material pertinent to this game account.