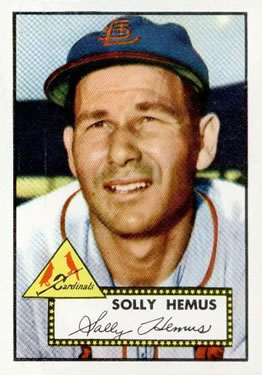 It was going to be a very hot day for the St. Louis Cardinals-New York Giants Sunday doubleheader at the Polo Grounds on June 15, 1952. The forecast was for temperatures in the 90s. The Giants had defeated the Cardinals 4-3 on Saturday behind Larry Jansen’s pitching and home runs by Bob Elliott and Wes Westrum. The Giants were 32-17, in second place in the National League, four games behind the Brooklyn Dodgers. After their loss the previous day, the Cardinals were 27-27, 11½ games back.

In Sunday’s first game, the Giants were pitching their ace, Sal Maglie, against Joe Presko for the Cardinals. Maglie, after winning nine straight games, had lost to Presko on June 2, his first loss of the season after nine victories. Maglie also lost his next start, to the Pittsburgh Pirates. Presko was 3-3, and had won his last start, a shutout against the Dodgers at Ebbets Field. The Cardinals were led by Red Schoendienst, Stan Musial, and Enos Slaughter, all future Hall of Famers. The Giants had Alvin Dark, Bobby Thomson, and Whitey Lockman in their starting lineup. Willie Mays, after starting the season with the Giants, had been called up for Korean War military duty. The Giants were managed by Leo Durocher while Eddie Stanky was at the helm for the Cardinals. In the previous offseason, Stanky had been traded by the Giants to the Cardinals for Max Lanier and Chuck Diering. The Cardinals wanted Stanky as their playing manager.1 Stanky had been one of the Giants stalwarts the year before as they won the pennant on Bobby Thomson’s “Shot Heard Round the World.”

Neither team scored in the first inning, and Maglie retired the Cardinals in order in the top of the second. In the bottom of the inning, Hank Thompson led off with a walk. After Elliott popped up, Don Mueller singled to left, sending Thompson to third with Mueller taking second on the throw to third. On an infield hit to shortstop by Dark, Thompson scored and Mueller went to third. Westrum’s single to left scored Mueller. Maglie’s bunt was mishandled by Cardinals third baseman Tommy Glaviano. With the bases full, Davey Williams singled to center and Mueller scored. Lockman’s single to left field drove in Westrum and Maglie, but Williams was thrown out at third base by left fielder Peanuts Lowrey as Lockman moved to second on the throw. Stanky made a pitching change, bringing in Jack Crimian, who retired Thomson on a grounder, ending the inning with the Giants leading 5-0. Presko had pitched an inning and two thirds and given up five runs, four earned.

The Giants resumed the attack in the third. Hank Thompson led off with a home run into the upper right-field deck. Elliott walked took third on Mueller’s single. Dark got his second infield hit, this one to second base, and Elliott scored. Westrum followed with a three-run homer to left-center and it was 10-0. Maglie, Williams, and Lockman each followed with singles, with Maglie scoring to make it 11-0. Stanky brought in Bill Werle to replace Crimian, who had given up six runs in a third of an inning. Werle retired the next three Giants.

In the fourth inning the Giants made some changes. Diering replaced Elliott in left field and Ray Noble came in to catch for Westrum. The Cardinals threatened but did not score. Werle retired the Giants in order in the bottom of the inning. To open the top of the fifth, Glaviano homered to deep left field. After one out, the Cardinals loaded the bases on two singles and a walk. Then Musial’s single to left scored two more runs, and Dick Sisler singled for another. After another out, Slaughter hit a three-run blast to right, making the score 11-7. Hoyt Wilhelm replaced Maglie and retired Glaviano on a groundout.

Leading off the seventh, Musial singled to center field. Sisler flied out but Lowrey was safe at first on an error by Lockman. Slaughter doubled to center, driving in Musial and leaving runners at second and third. Glaviano’s single to left scored Lowrey with an unearned run. The score was now 11-9, Giants, and Durocher summoned George Spencer to replace Wilhelm. On Del Rice’s force-play grounder, Slaughter came across with another unearned run, trimming the Giants’ lead to 11-10. Pinch-hitter Hal Rice’s popout to first ended the inning. Eddie Yuhas came in to pitch for the Cardinals in the bottom of the seventh and retired the Giants in order.

In the eighth, Solly Hemus’s leadoff home run to right off Spencer tied the score, 11-11, and brought in the fourth Giant’s pitcher, Max Lanier. Lanier retired Schoendienst and Musial, but Sisler singled, Lowrey walked, and Slaughter singled in Sisler, giving the Cardinals a 12-11 lead. Yuhas retired the Giants in the bottom of the eighth with the only blemish a Lockman single.

In the top of the ninth, Monty Kennedy came in to pitch for the Giants and Del Rice greeted him with a single to right. Yuhas sacrificed him to second. Hemus then homered to right. It was 14-11, Cardinals, going into the bottom of the ninth.

Yuhas retired the first two batters, Hank Thompson, and pinch-hitter Bill Howerton, but walked Mueller and Dark. Willard Schmidt relieved Yuhas. Bill Rigney pinch-hit for Noble and reached on an error by third baseman Glaviano, loading the bases. Sal Yvars pinch-hitting for pitcher Schmidt, was safe at first on shortstop Hemus’s error, and Dark scored to make the score 14-12. The Giants were just a long base hit away from tying the score. However, Davey Williams popped out to catcher Del Rice in foul territory, ending the contest with an improbable and sloppy Cardinals victory. Each team made three errors.

The Cardinals’ Slaughter had three hits, including a home run, and five RBIs. Solly Hemus drove in three runs with his two homers. Eddie Yuhas, stifled the Giants bats in the later innings, was the winning pitcher, and Lanier was the loser. Asked why he didn’t rest some of his players including Musial, who twisted his knee while batting in the first inning, given the heat and a doubleheader, Stanky responded, “Something inside of me told me not to make those changes. Call it a silly hunch.”2

For the Giants, it was a demoralizing loss before a crowd of 41,889. The Brooklyn Daily Eagle said it succinctly: “Will Giants Ever Live This Down?”3 Maglie commented, “With that big lead, I was sure we had this one stowed away so I just let up. Then I couldn’t get it going again.”4 Given the sweltering heat, did Durocher leave Maglie in too long in the fifth inning?5 In the manager’s defense, the Giants relief pitchers did not fare too well.

The author as a young boy and a Giants fan suffered through this loss while attending the doubleheader.