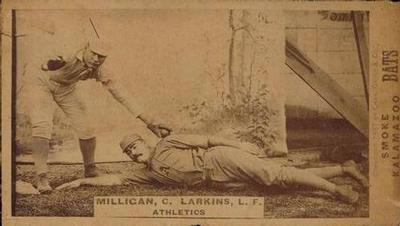 In the first game of the season played in Philadelphia between two cross-state rivals, the Athletics trounced the Pittsburgh Alleghenys, 14-1. A crowd of approximately 2,000 witnessed the home team’s 20 base hits and saw Philadelphia’s center fielder Henry Larkin become the first player in major-league history to hit for a reverse natural cycle.

With a record of 24-16, second-place Pittsburgh trailed the St. Louis Browns by five games, while the Athletics (17-23) were tied with the Baltimore Orioles in fifth in the American Association standings. Philadelphia had no problem scoring: The Athletics’ 269 runs tied them with the Browns for tops in the league at this point. The problem was that the Athletics allowed more than they scored (272), second-most in the American Association.

From the start of the 1885 campaign through May 27, the Athletics had played just five of 28 games at home and had struggled on the road. They were now in the middle of a 16-game home stand, and had won eight of their last 12 games at the Jefferson Street Grounds, their home ballpark. Meanwhile, after beginning the season with seven straight away games, Pittsburgh had played 23 of their next 24 games at home (Pittsburgh’s Recreation Park), and by winning 16 of those home games, the Alleghenys had climbed into second place. They began a four-game series against the Athletics that would end a 13-game road trip on June 20.

Pittsburgh manager Horace Phillips called on 22-year-old left-hander Ed Morris to make the start, his 24th of the season.1  For the home team, player-manager Harry Stovey gave the start to right-hander Bobby Mathews. He was the workhorse of the Philadelphia team, and this was his 15th start of the year. According to Sporting Life, Mathews “was the first to introduce a slow raise [a rising changeup], as far back as ’72.”2

The Athletics batted first and “jumped on Morris in great style.”3 Blondie Purcell led off the game by grounding a ball to third baseman Bill Kuehne, who fumbled it, allowing Purcell to reach. Stovey singled and Larkin smacked a three-run home run, giving Philadelphia the only runs it would need.

In the bottom of the second, Pittsburgh bunched together three singles by Fred Carroll, Jim Field, and Kuehne to produce its first and only run (scored by Carroll) of the game. Philadelphia answered in the top of the third. Larkin led off with a triple. He scored on Knight’s RBI single. An out later, Jocko Milligan hit a Morris pitch “between the fences in left field for a home run.”4 The Athletics now had a five-run lead at 6-1.

In the fourth, Philadelphia added a run when Stovey singled, advanced to second on a passed ball, and scored when Larkin laced a double. An out later, Corey singled, and Larkin was thrown out at the plate trying to score from second base. In three at-bats through the first four innings, Larkin had homered, tripled, and doubled, scored twice, and driven in four runs.

The scored remained 7-1 until the top of the eighth inning. Stovey started the offensive rally with a triple. Larkin, who had singled in the sixth, now hit his second double of the game to produce a run. Lon Knight reached on a throwing error by Pittsburgh first baseman Field. Fred Corey tripled, garnering two runs batted in, and after Milligan was retired, George Strief’s out brought Corey home.

In the ninth, three singles and a double enabled three Athletics players to score. Mathews helped his own cause with a single and advanced on Purcell’s single. Stovey’s out brought home Mathews. Larkin then singled, and Knight’s double plated Purcell and Larkin. That gave the home team a 14-1 lead, which stood as the final score. This was not the highest run total of the season for the Athletics. Just two games earlier, the A’s had scored 19 against the Louisville Colonels. They had now won eight of their last 11 games, after the win over Pittsburgh, and in six of those 10 (including five wins and one loss), Philadelphia had scored at least 11 runs.

Larkin “wielded the ash with great freedom, and, out of six times at the bat, he hit safely every time.”5 The Pittsburgh Post-Gazette claimed that Larkin’s performance was “one of the greatest batting records ever made,”6 comparing him to the New York Metropolitans’ Dave Orr, who had a 6-for-6 day only four days earlier, when he hit for the cycle against the Browns.

Every Philadelphia player had at least one hit. After Larkin, Stovey shined, “making a three-bagger and two singles.”7 Stovey also scored three runs. Only Strief and Cub Stricker did not score a Philadelphia run.

According to the Pittsburgh Daily Post, “The visitors could do nothing with Mathews’ delivery.”8 Mathews “kept the Smoky City men down to five hits,”9 four of which were singles. Outside the second inning, the Philadelphia hurler allowed only two safeties. The Philadelphia Inquirer reported that “the visitors seemed demoralized after the first inning.”10 Mathews registered five strikeouts and, according to the Pittsburgh Post-Gazette, “eleven others had two strikes called on them before they either hit the sphere or went out on base.”11 His teammates played fantastic defense behind him, highlighted by “Stricker’s great running catch of a high-fly off of Tom Brown’s bat, in the eighth, and Purcell’s catch of Pop Smith’s long drive to the left-field fence in the last inning.”12

Larkin’s cycle came only days after two other players hit for the cycle. Orr did so on June 12 against the Browns,14 while George Wood of the National League Detroit Wolverines hit for the cycle against the Chicago White Stockings on June 13. Larkin became the second player in Philadelphia Athletics franchise history to hit for the cycle, joining teammate Lon Knight, who hit for a natural cycle on July 30, 1883. Both Knight’s and Larkin’s successes came on their home field, the Jefferson Street Grounds, and in both instances, the visiting team was the Pittsburgh Alleghenys.

As a final note, Philadelphia’s Times told its readers that “Mr. John Kelly umpired in a satisfactory manner and was frequently applauded by the crowd.”15

In addition to the sources mentioned in the Notes, the author consulted baseball-reference.com, mlb.com, sabr.org, and retrosheet.org. Play-by-play was taken from the Pittsburgh Post-Gazette and Philadelphia Inquirer accounts of the game.

1 Morris led the Alleghenys and the American Association with 63 starts in 1885 (tied for 33rd most all-time). Every start became a complete game, and he finished the 1885 season with a record of 39-24.

14 New York’s Orr hit for the cycle for the second time in his career on August 10, 1887, but the Metropolitans lost to the Baltimore Orioles, 6-5.