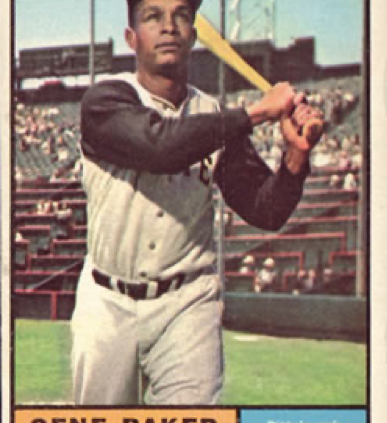 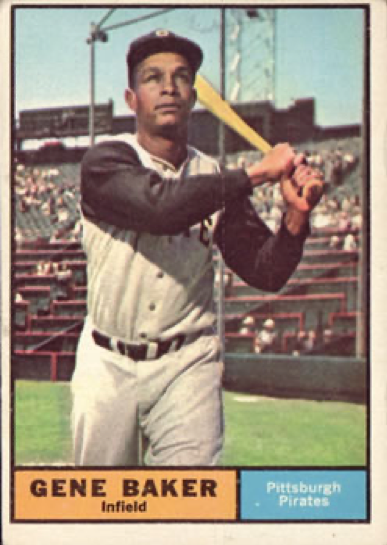 Gene Baker was not, as is sometimes reported, the first Black manager in minor-league baseball. But it was still a significant step forward when the 36-year-old took the reins of the Batavia (New York) Pirates of the Class D New York-Penn League on the night of June 19, 1961.

There’s no firm record of a Black manager before Baker leading an affiliated minor-league team. Previous Black managers like Sam Bankhead, Chet Brewer, and Marvin Williams managed independent teams in the 1950s in border-straddling small-time circuits like the Provincial League, the Southwest International League, and the Manitoba-Dakota League. Baker, on the other hand, went directly from the Pittsburgh Pirates’ active roster to skippering a mostly White1 team of Pittsburgh prospects in a well-established minor league, linked firmly to the majors.2

Also, before Baker no Black professional manager had played in the American or National leagues. Bankhead, Brewer, and Williams were Negro League veterans, blocked by segregation from the “major leagues” as defined at the time. This doomed them to little recognition in the days when the Negro Leagues were not considered part of Organized Baseball.3 Baker, also a Negro League veteran, played parts of eight seasons with the Cubs and Pirates, earning All-Star recognition in 1955. He’d even appeared in the previous year’s World Series, playing in three games as a reserve with the champion Pirates.

So while he wasn’t the first of his race to lead a minor-league team, Baker broke ground in his own right, bringing Black managers visibility and status that no predecessor had achieved. One newspaper headline from the summer of 1961 summed up his contribution: “Baker Most Prominent of His Race to Pilot.”4 He also took over as the team’s most frequent third baseman, appearing in 41 games at the hot corner and 53 games overall, hitting .387 in 195 at-bats.

As he entered his new role, Baker acknowledged his less publicized Black predecessors in interviews. He added optimistically: “I feel that the fans won’t care what color I am as long as the club is scoring runs and winning games. I think they want and deserve a manager who can do the job and do it well. I hope I can achieve this goal.”5

At the time, the New York-Penn League played a season of roughly 125 games.6 Batavia had gotten off to an 18-23 start7 under James Adlam, a former minor-league infielder in the Cardinals and Yankees chains. The Pirates had a high regard for Baker’s teaching and scouting abilities, and when it became clear that his days as a big-league player were dwindling, they appointed him Batavia’s manager to keep him in the organization. They found a new job for Adlam as well. A few days later, he replaced Aaron Robinson at the helm of the Shelby (North Carolina) Colonels of the Class D Western Carolinas League.8

Four players on the Batavia team went on to the major leagues, and Baker started two of them in his first game – catcher Buddy Booker and center fielder Don Bosch.9 The two Black players10 on Baker’s roster were the Pirates’ biggest offensive threats, and Baker started them as well. Shortstop Roberto Sanchez hit 36 home runs that season, drove in 117 runs and stole 27 bases, while right fielder Arthur Blunt added 35 homers and 92 RBIs.11 Baker tapped 23-year-old lefty Gary Aldrich as starting pitcher. Aldrich went 12-6 with a 2.58 ERA in 24 games at Batavia, including 18 starts. Baker did not play.

The home Elmira Pioneers, a Philadelphia Phillies affiliate, entered the game with a record of 20-22, in fifth place, 5½ games behind Geneva. Manager Moose Johnson oversaw three future major-league players that season, but left fielder Hank Allen was the only one who played that night.12 Twenty-year-old Allen had a fine season for Elmira, hitting .282 with a club-leading 22 home runs and 88 RBIs. His younger brother, future major leaguer Dick Allen, had also played for Elmira the season before.13

The start on the mound for Elmira went to 25-year-old lefty Ed “Duke” Hottell, pitching in the last of his five seasons in the minors. Formerly of the University of Southern California, Hottell went 3-3 with a 5.73 ERA in 22 games in Elmira, including five starts.14 He entered the game with a 2-0 record.

Pitching in front of 588 home fans, Hottell was in fine form. He worked a complete game, scattering five hits and two walks while striking out five. Batavia managed only one run, in the second inning. First baseman Ray Vasquez beat out a slow grounder to third, then took second base on a wild throw by Elmira third baseman Bill Tomaselli. Booker’s double to right field scored Vasquez.15 One news story said Hottell was “at his deceptive best” throughout the game, adding that the pitcher “had the big pitch whenever he needed it.”16

Elmira almost tied the game in the second, but Tomaselli was ruled out at the plate in a close play that provoked an argument from Johnson.17 The Pioneers broke through for a run in the third inning, cashing in on a fielding error. Shortstop Ernie De La Osa beat out a bunt to the mound, and a wild throw by Aldrich allowed him to scoot all the way to third. A groundball by first baseman Fred Mason brought him home.18

The Pioneers pulled away in the sixth, when a decision by Baker backfired. Catcher Larry Baughman and Allen hit consecutive singles. With one out, Baker ordered Aldrich to intentionally walk second baseman Cal Shears, giving the Pirates a play at every base. But right fielder Bud Jamison spoiled the strategy by poking a groundball past the mound and into short center field. Baughman and Allen scored for a 3-1 Elmira lead.19

Aldrich pitched seven innings before being pulled for pinch-hitter Joe Reddick, who drew a walk but was stranded on base. Aldrich’s replacement on the mound, Ray Saba, walked 52 hitters in 66 innings in 1961, and his control struggles cost him in the eighth inning. Allen walked, Tomaselli singled, and both advanced a base on a wild pitch. A pair of fly balls scored both runs. Saba then walked three hitters in a row, starting with pitcher Hottell. While news accounts are unclear on the details, Hottell scored to make the game 6-1 before Saba finally shut down the rally.20

The game ended in 2 hours and 25 minutes, with Hottell the winner and Aldrich the loser. Baker’s response to the loss was laconic and even-tempered: “Lose the first one and we’ll win the rest.”21 While that lofty goal was clearly unattainable, Batavia greatly improved under Baker’s guidance. The Pirates went 47-36 the rest of the way, rising from seventh place to third. In a pregame ceremony near the end of the season, Batavia fans presented Baker with a watch to honor him for a job well done.22

Baker coached at the Triple-A level the following year and with the big-league Pirates in 1963 before returning to Batavia as manager in 1964. From there, he moved into scouting, serving as Pittsburgh’s chief scout in the Midwest for 23 years.

Some sources unofficially credit Baker as the first Black manager in the American or National leagues, citing a September 21, 1963, game in which Baker took over as Pirates skipper for two innings after the ejection of Danny Murtaugh. The Pirates’ 5-3 loss in that game, however, was charged to Murtaugh, not Baker. A Black manager did not officially reach the American or National Leagues until Frank Robinson took over the Cleveland Indians in 1975.

In addition to the specific sources cited in the Notes, the author used the Baseball-Reference.com and Retrosheet.org websites for general player, team and season data. Gene Baker’s SABR biography, written by Charles F. Faber, also was a primary source for this story.

Neither Baseball-Reference nor Retrosheet provides box scores of minor-league games, but the June 20, 1961, edition of the Elmira (New York) Star-Gazette published a box score.

The author thanks FultonHistory.com for making some of the cited newspapers available online.

Image of 1961 Topps card No. 339 downloaded from the Trading Card Database.

2 All eight teams in the 1961 New York-Penn League were affiliated with major-league organizations. Players who appeared in the league that year and went on to major-league renown included Tony Perez, Mel Stottlemyre, Steve Blass, Cesar Tovar, Bill Robinson, and Jim Rooker.

3 For instance, news reports from the early 1960s gave varying accounts of how many Black managers preceded Baker, who they were, and where they worked, suggesting that the correct information was not widely known. In announcing Baker’s hiring, the Pirates organization incorrectly described him as the second Black manager in Organized Baseball, behind Nate Moreland. (See Note 5.)

5 White. In this interview, Baker listed previous Black professional managers as Walker, Bankhead, Brewer, and Nate Moreland at Mexicali of the Arizona-New Mexico League. The Pittsburgh Courier story cited in Note 1 also listed Negro League veteran Eudie Napier as a former professional manager, but did not include details. Baseball-Reference had no record of Napier as a manager as of August 2021.

6 The league moved to a short-season schedule of roughly 75 games starting in 1967 and remained short-season until its demise early in 2021.

9 The two future big leaguers who did not appear on June 20 were pitchers Steve Blass and Dave Wissman. A decade later, Blass started and won the clinching Game Seven of the 1971 World Series for Pittsburgh. After suffering a well-publicized loss of his pitching control, Blass then moved to the broadcast booth and became a Pirates announcer for many years.

11 Sanchez was 27 years old in 1961, which might explain why his blistering season at bat did not qualify him as a prospect. He briefly reached Triple A for 12 games the following season, the highest level he attained in his 12-season minor-league career. The 23-year-old Blunt hit .273 the following season between Classes A and D and then left professional baseball.

12 The other two were pitchers Jeff James and John Morris.

13 The youngest Allen brother, Ron, also made the major leagues for a handful of games with the 1972 St. Louis Cardinals. However, he never played for Elmira.

14 Hottell also appeared in seven games with Des Moines in the Class B Indiana-Illinois-Iowa (Three-I) League that season.

17 Kent Nixon, “Pioneers Trip Batavia, 6-1,” Elmira (New York) Advertiser, June 20, 1961: 6. Nixon wrote two distinct and mostly different game stories for two Elmira newspapers. His story for the Advertiser was a detailed summary of game action, while his piece for the Star-Gazette combined some of the game information with forward-looking context on coming games.

20 “Pioneers Trip Batavia, 6-1.” Acc ording to the story, Allen and Tomaselli scored on sacrifice flies, while Hottell came home on an infield out. However, the “infield out” would have been the third out of the inning, and Hottell’s run would not have counted unless the batter reached base on a hit and was put out trying to advance. Other stories about the game do not specifically describe this play.