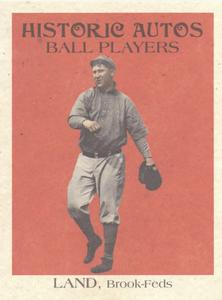 Refreshed from a day off, the Indianapolis Hoosiers of the Federal League hosted the Brooklyn team, owned by brothers Robert and George Ward. Robert had ascribed the team its name after the Ward Bakery Company’s best-selling product, Tip-Top Bread. The Indianapolis club was owned by Harry Sinclair, a millionaire by age 30, at the time an oil-well lease broker and president of the National Exchange Bank in Tulsa, Oklahoma. In 1916 he would found Sinclair Oil. He did not name his team. The baseball reporters informally did it for him, harking back to two nineteenth-century Indianapolis teams of the same name, one in the American Association in 1884 and the other in the National League in 1887-89.

It was a perfect day for baseball. Indianapolis was enjoying a balmy 77-degree day. A crowd of 5,500 exuberant fans filed into Federal League Park, just built in 1913.1 The city now had the luxury of two teams to cheer for: their beloved Indians in the American Association and now a major-league franchise, the only one they ever had to the current day. Only 10 days earlier, the Hoosiers had been mired in seventh place. Now they were in second, behind the Chi-Feds of Chicago, and on the crest of a nine-game winning streak.2 On this day’s schedule was an afternoon twin bill.

Right-hander Cy Falkenberg, the Hoosiers ace and a nine-year major-league veteran, was slated to start. He played most recently with the Cleveland Naps, with whom he had his best year ever in 1913, recording a 23-10 record. The 1914 season was his high-water mark.3 His receiver this day was Bill Rariden, a journeyman catcher with very modest hitting credentials.4 His entire career up to this point was a five-year stint with the Boston Braves.

The battery for Brooklyn consisted of Byron “Duke” Houck5 on the mound and Grover Land behind the plate. Houck had started the season with the Philadelphia A’s of the American League. Connie Mack released him rather have him ride the bench. It was a surprising move to the extent that Houck had recorded a 14-6 record for the A’s the previous season. His batterymate Land had played in only 95 games over a span of five previous seasons with the Cleveland Naps.

The Tip-Tops struck early and spotted Houck to a three-run lead in the first inning. With one out, left fielder Steve Evans was safe on a throwing error by young shortstop Jimmy Esmond, who had spent his two previous major-league seasons with Cincinnati. Art Griggs doubled, sending Evans to third. Claude Cooper hit a sacrifice fly, on which Evans scored and Griggs advanced to third. The fleet Solly Hofman,6 a.k.a Circus Solly, was hit by a Falkenberg pitch and stole second. A passed ball by Rariden allowed Griggs to score and Hofman to advance to third. Rookie Tex Wisterzil walked and started a double steal, in the middle of which Hofman was trapped in a rundown on the third-base line. As luck would have it for the runner, third baseman Carl Vandagrift7 threw high to Rariden, allowing Hofman to score the third and final run of the inning.

The two opposing pitchers both maintained control for the next two innings, allowing no runs. The Hoosiers retaliated with a run in the fourth. With one out, veteran Frank LaPorte drew a walk. First baseman Charlie Carr connected with a bouncer to Wisterzil at third, who threw to second on a fielder’s choice to get the leading runner. However, Hofman dropped the ball and everyone was safe. Esmond fouled out, but Al Scheer singled to left, easily scoring LaPorte, finishing the scoring for the inning.

In the fifth inning the Tip-Tops canceled out the Hoosiers’ run with another of their own. It came about as the result of a single by Hofman, who took second on an infield out by Wisterzil and home on a single by Land.

In the sixth both teams scored a run. Brooklyn’s was its last of the game. For the Hoosiers, Carr singled and was driven in by Esmond with a double to center, the home team’s only extra-base hit of the game. Future Hall of Famer Edd Roush pinch-hit for Falkenberg but did not reach base. Hoosier manager Bill Phillips replaced Falkenberg with Harry Billiard to start the seventh, an inning in which there was no scoring. The visitors went into the eighth with a three-run lead. Thus far, Houck had performed well. Had Mack erred in releasing the young hurler? Yet, he still had to protect his lead for six more outs.

Houck walked back to the mound to start the bottom of the ninth. He retired Vin Campbell, the first batter he faced, but then gave up back-to-back singles to Vandagrift and Benny Kauff.8 Manager Bill Bradley threw Tom Seaton into the fray to put out the fire. His first pitch was errant and allowed both runners to move up a base. LaPorte then sent a ball to right field just beyond the reach of Cooper, who had to scramble to pick up the ball. Vandagrift, on third, hesitated to see whether or not the ball would be caught. But Kauff was out of the chute at the crack of the bat and passed Vandagrift on the way to the plate.

Catcher Land saw that two runners had crossed the plate but did not note in what order. Out of disgust at what he assumed was a walk-off hit, Land threw the still-in-play baseball over the grandstand. In spite of Bradley’s heated argument that Kauff should be out, the umpires ruled against him because of Land’s hasty misjudgement. The rule governing their call was Section 16 of Rule 56: “If a baserunner pass a preceding runner before such runner has been put out he shall be declared out immediately.” Since Land had not tagged anyone out, both runners were safe.

Reliever Harry Billiard got the win (2-3) in a now-10-game winning streak. He pitched hitless ball during his three innings of work. Bryan Houck took the loss (0-5), vindicating Mack’s assessment of his ability. He would be involved in only three more decisions the rest of the season.

The fans were on a high after the explosive ninth inning capped off a real cliff-hanger. Unbounded exuberance was the mood awaiting the start of game two. Will the heroes make it 11 games in a row?

In addition to the sources cited in the Notes, the author also consulted Baseball-Reference and the following:

1 Dick Farrington, “Two Great Finishes Give Hoosiers First Place,” Indianapolis Star, June 21, 1914: 45. No box scores seen, including Baseball-Reference had an attendance figure. Dawn Mitchell. “Play Ball! Where Indianapolis Watched America’s Pastime,” Indianapolis Star, April 10, 2016. The park was built in 1913 and ready for occupancy for 1914 Federal League play. After the league folded in 1915, the ballpark was demolished and the land repurposed for a railroad yard.

2 In 1914 the Chicago FL entrant was called the Chi-Feds. For the 1915 season they were officially the Whales. The team was led by the pugnacious player-manager Joe Tinker of “Tinker to Evers to Chance” fame.

4 Rariden was a local Hoosier boy born and raised in Bedford, Indiana.

5 Houck was out of major-league ball after the 1914 season. He came back for a 27-game stint with the St. Louis Browns in 1918, after which he was out of the majors forever.

6 Hofman was a 31-year-old veteran with 11 years of prior service with the Pirates and primarily the Cubs. His last major-league season was 1916. His given name was Arthur Frederick. Regardless, he was called Solly or Circus Solly.

7 Vandagrift was playing in his only major-league season.

8 Kauff was arrogant and boastful. In spite of his penchant for trash talking, he was the toast of the Federal League. He was fleet and powerful, leading the league in batting average (.370), PA (669), runs (120), hits (211), 2B (44), SB (75), OBP (.447), OPS (.981), and TB (305). This was truly his rookie season. His only prior major-league experience was five games for the New York Highlanders. He would never have another year like 1914 in his relatively short eight-year stint in major-league baseball. (He was banned from baseball by Commissioner Kenesaw Mountain Landis in 1921 after being charged in connection with a car theft.) His performance in 1914 saw him dubbed “Ty Cobb of the Federal League.”