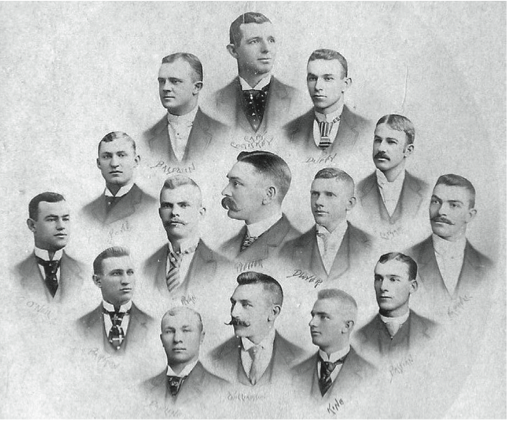 A hit that wasn’t a hit turned an exciting, but hardly unique, pitchers’ duel into baseball history. The scene was Chicago’s South Side Park; the opponents were two Players League teams, the Chicago Pirates and Ward’s Wonders of Brooklyn.

Played before a crowd estimated at between 4,000 and 4,500, the game was the first of four scheduled between two struggling teams. Although preseason predictions had Charles Comiskey’s Pirates winning “first place in a walk-over,” Chicago had played no better than .500 ball. On the other hand, little had been expected of Brooklyn, which got off to a quick start before stumbling in June.

Chicago had major problems on the left side of its infield because of poor performance, injuries, and personal issues. Brooklyn’s lineup was also depleted because of injuries, most notably the loss a few days earlier of Dave Orr, one of the league’s best hitters.1

Although the teams’ regular lineups weren’t up to par, the same couldn’t be said of the starting pitchers. In the pitcher’s box for Brooklyn was its best hurler, Gus Weyhing. Opposing him was the even more intimidating Silver King. An ace pitcher with the American Association St. Louis Browns, King had jumped to the Players League with teammate Charles Comiskey, the Chicago player-manager.

Although born Charles Frederick Koenig, the Chicago pitcher was known almost exclusively by his nickname. It derived both from his blond hair, which was said to resemble “burnished silver” and also from the fact that the German word Koenig is King in English.

Whatever he was called, the right-hander used speed and control to dominate hitters. After his last start, the Chicago Herald had compared the opposition’s offensive efforts to a pig trying to climb a greased pole.2

Because of the problems at shortstop and third base, Comiskey was forced to use Jack Boyle and Dell Darling, both primarily catchers, at those positions. Orr’s absence from the Brooklyn lineup gave King one break, but there were still three .300 hitters in the Ward’s Wonders’ batting order.3

Home team manager Comiskey chose to bat first, and Weyhing retired the Pirates without incident. With one out for Brooklyn in the bottom half of the inning, John Montgomery Ward, Brooklyn team manager and founder of the Brotherhood of Professional Base Ball Players, which had started the Players League, drew one of the three walks King would issue. The Brooklyn shortstop stole second and third before catcher Charles Farrell picked him off that base. Chicago’s infield weakness was demonstrated during Ward’s next at-bat as fill-in third baseman Boyle threw his bunt over Comiskey’s head at first, one of his three throwing errors in the game. Then one of the two true infielders in the Chicago lineup, second baseman Fred Pfeffer, threw out Ward trying to reach second.4

If King was being let down by Chicago’s fielding, the hitting was even more futile. The Pirates mustered only four singles and two walks, never advancing a man past second. One potential Chicago threat was short-circuited by Ward, who made a leaping catch of Comiskey’s line drive in the sixth and turned it into a double play.

In spite of being the beneficiary of three walks and eight Chicago errors, the Ward’s Wonders were hitless and scoreless as they batted in the seventh. With one out George VanHaltren hit a grounder to Darling, who had already made two errors. The catcher-turned-shortstop got to the ball “quickly enough [almost] to hand it to Comiskey” at first, a newspaper reporter at the game told readers the next morning. Instead, he threw “like a crazy man” past Comiskey, and Van Haltren went to second. Brooklyn’s Paul Cook then bunted to King, who threw him out at first while Van Haltren advanced to third. At least one writer speculated that King had a play at third, but the Chicago pitcher probably, and understandably, no longer had confidence in the left side of his infield.5

The next batter was second baseman Louis Bierbauer, who hit what on most days would have been a single to right field. However, Chicago right fielder Hugh Duffy followed a difficult stop with a strong throw to retire Bierbauer at first, although Van Haltren was able to score the game’s first run.

One dramatic moment remained. Chicago’s Jim Ryan led off the ninth with a drive out of the park but foul. He struck out on the next pitch, and the last two batters went down. Silver King had not only lost a classic pitcher’s duel, but earned the dubious distinction of being the first major-league pitcher to no-hit the opposition and lose. To further add to the bizarre events, Comiskey’s decision to bat first meant King had pitched only eight innings.6

The biggest challenge to the media was finding enough adjectives to describe the Pirates defense or lack thereof. Recognizing that King had pitched the “best game” of the season, they lamented the “miserably poor infield work” of Boyle and Darling. Stating the obvious, one writer noted that Darling, who had five errors in two consecutive games at short, was “badly out of position.” In a final touch of irony, Chicago’s regular shortstop, Ed Williamson, who had been away with his dying sister, returned for the remaining three games—all Pirates victories.

Comiskey, Ward, and Duffy would go on to the Hall of Fame, but it is doubtful that they, or anyone else who was there, ever forgot the game. As one eyewitness put it, “It will be a long time before as queer a game will be seen again.”7 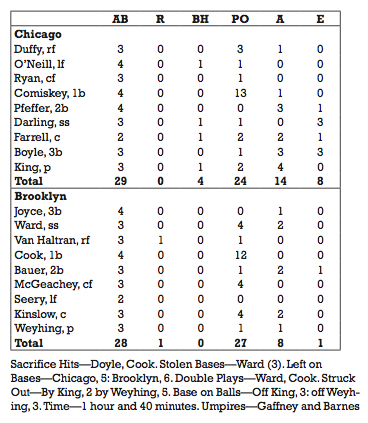