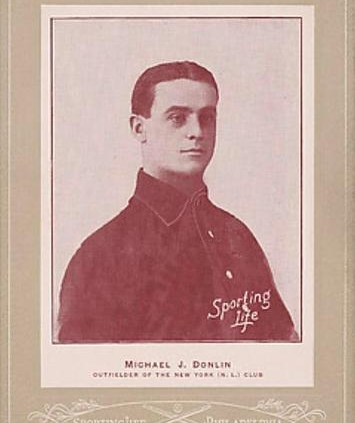 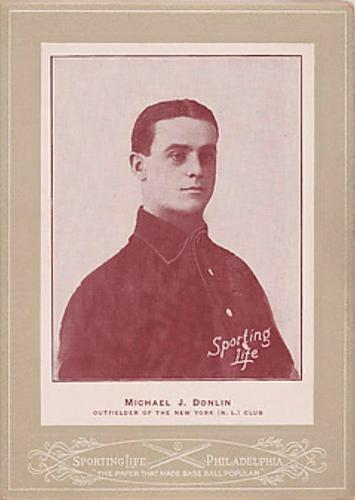 John McGraw, the third baseman-manager of the Baltimore Orioles, led a team that included future Hall of Famers Wilbert Robinson, Roger Bresnahan, and Joe McGinnity as well as himself. Also a member of the team was Turkey Mike Donlin. Donlin got his nickname because of his strutting walk and red neck.1 Donlin had played for the St. Louis Perfectos/Cardinals in his first two major-league seasons, 1899 and 1900, batting .323 and .326 and hitting a total of 16 home runs in baseball’s Deadball Era.

Baltimore was hosting the Detroit Tigers in the third game of a four-game series. The Orioles had eked out a 4-3 win in the first game came away with a 10-3 victory in the second game.

On the mound for George Stallings’ crew in game three was right-hander Roscoe Miller, who had debuted in the major leagues on April 25. In his rookie year Miller would lead the Tigers in wins (23), winning percentage (23-13, .639), shutouts (3), and innings pitched (332).

Getting the start for the Orioles was right-hander Frank Foreman, who had made his major-league debut in 1884 for the Chicago/Pittsburgh franchise in the Union Association. The highlight of his career came in 1889 when he won 23 games for the Baltimore Orioles of the American Association, the only time in his career that he won 20 or more games.

After the game was over, the headlines in the paper could have read “Miller’s Massacre” or perhaps “Detroiters Demolished,” because Baltimore had beaten Detroit 17-8, with Donlin the chief tormenter, with a 6-for-6 day.2

Before Donlin was an Oriole he had acquired a reputation for demolishing pitchers’ self-esteem and his performance in this game might have made people forget about all of his previous performances.3 Against the Boston Beaneaters on June 2, 1900, Donlin reached Boston twirlers for three singles, a triple, and a home run as he and his St. Louis teammates went down to defeat at the hands of the Beaneaters, 17-16.4

On June 24 Orioles got four runs in the first inning, thanks to hard hitting and a couple of errors by the Tigers.5 They scored six more runs in the second inning to take a 10-1 lead. Inning three saw Baltimore score three runs on a triple, a double, and two singles and go ahead 13-1.

Foreman allowed just one run in the first five innings, but the Tigers bats came alive for six runs in the sixth.6 Foreman was driven out of the game. Third-year right-hander Joe McGinnity replaced Foreman and held the Tigers to one run the rest of the way.7

In the bottom of the sixth Baltimore added two runs to make the score 15-7. In the eighth inning Detroit plated its eighth run and Baltimore got two to come away with a 17-8 victory.

The 22 hits in eight innings by the Orioles for 35 total bases set an American League record.8

The Tigers were led on offense by Ducky Holmes, catcher Al Shaw, and Roscoe Miller, who each had two hits in the loss. Miller took the loss on the mound going the full nine innings, allowing all 17 runs and all 22 hits. He walked three batters, and hit two. The game was witnessed by just 2,000 spectators.

The only player who did not have a hit for Baltimore in the game was McGinnity, who had only one at-bat. Starting at the top of the lineup, John McGraw had one hit as did Roger Bresnahan (triple), first baseman Jimmy Hart, and Foreman (triple). Jimmy Williams (triple), Jack Dunn (the same Jack Dunn who would discover a young left-hander by the name of George Ruth), and catcher Wilbert Robinson all had two hits. Those with three hits for the Orioles were Cy Seymour (double) and outfielder Jimmy Jackson.

Another feature of the game was the play at first base of the Orioles’ Hart, who handled 13 chances without an error.

Donlin’s six hits included two triples and two doubles. He scored five runs. Before this game a player had collected six or more hits in a game 49. Fred Tenney on May 31, 1897, and Barry McCormick on June 29, 1897, each had eight hits in a game.

After the loss, Detroit (27-24) and Baltimore (23-20) were tied for third place in the American League standings, 4½ games behind the Chicago White Sox, who had moved into first place past the Beaneaters.

The colorful Donlin9 finished his 11-year major-league career in 1914 with the New York Giants, after playing for the Cincinnati Reds, the Beaneaters, and the Pittsburgh Pirates. His .333 career batting average placed him 28th on the all-time list, just behind Eddie Collins and Paul Waner and just ahead of Stan Musial and Wade Boggs.

At the end of the inaugural American League season, the Tigers were in third place with a record of 74-61, 8½ games behind the first-place White Sox. The Orioles (68-65) were in fifth place, 13½games behind Chicago.

The Orioles played just the 1901 and 1902 seasons in the American League before league President Ban Johnson decided to move the team to New York to compete with the National League Giants. The Orioles became the New York Highlanders, and later the Yankees. Except for the upstart Federal League in 1914 and 1915, Baltimore remained a minor-league city until 1954, when the St. Louis Browns relocated there.

In addition to the game story and box-score sources cited in the Notes, the author consulted the Baseball-Reference.com and Retrosheet.org. websites

9 He was cocky and self-assured, and when he wanted to be, also a damn fine ballplayer who appreciated his own worth. He once asked McGraw for a $500.00 raise, and when the manager refused, he “retired” and went on the road with his wife, actress Mabel Hite, as part of a husband/wife act. Thedeadballera.com/BeerDrinkersMikeDonlin.html. See also Donlin’s biography at the SABR BioProject: sabr.org/bioproj/person/3b51e847#_edn1.