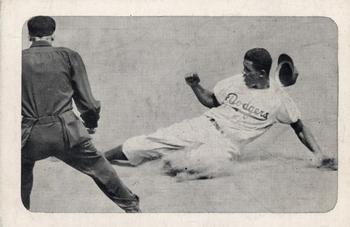 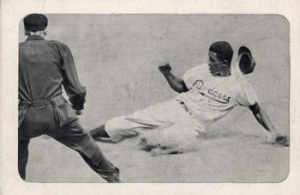 On the morning of Tuesday, June 24, 1947, two titans of sport made their final preparations before doing battle that evening. Linked not only by their race, but by the last name Robinson, Sugar Ray would fight in the ring while Jackie would fight on the diamond.

Walker Smith Jr., better known as Sugar Ray Robinson, squared off against Jimmy Doyle in the first defense of his world welterweight title in front of 11,275 fans at the Arena in Cleveland. After dreaming the night before that he killed Doyle in the ring, Robinson went on to do just that after a technical knockout in the eighth round of the 15-round bout.1 Doyle, 22, died the next day from what the county coroner determined was a cerebral hemorrhage following “blows to the jaw and face, although his head striking the ring floor may have added to the damage.”2

Sugar Ray is widely regarded as one of the greatest boxers of all time, if not the greatest pound-for-pound boxer to ever enter a ring.3 He competed professionally from 1940 to 1965 and was inducted into the International Boxing Hall of Fame in 1990.4

Some 135 miles away, in Pittsburgh, Jack Roosevelt Robinson fought a very different battle against the Pirates that evening. In front of 35,331 fans at Forbes Field, the Brooklyn Dodgers (32-26) faced off against the Pirates (22-34). The Dodgers were managed by Burt Shotton, and Billy Herman was the skipper of the Pirates. The 2-hour 41-minute game saw a pitching matchup of the Dodgers’ Ralph Branca against the veteran lefty Fritz Ostermueller of the Pirates. The 21-year-old Branca came into the game with a record of 8-6 after five days’ rest and Ostermueller, 39, entered with a 5-3 record after resting for six days.

This was not the first time Robinson went toe-to-toe with Ostermueller. They had met on May 17 at Forbes Field, when Ostermueller hit Robinson with a pitch in the first inning of the series’ final game. The ball hit Robinson in the left arm, not in the head as history often misrepresents, and marked the fourth time that Robinson had been hit so far in the season.5 Ostermueller faced the Dodgers five more times that season. In his autobiography, I Never Had It Made, Robinson remembered the death threats, the taunting, and the attempts to intimidate and injure him. But his only memory of Ostermueller was taking advantage of the pitcher’s slow and deliberate windup and stealing home with the winning run.6

On June 24, Eddie Stanky and Al Gionfriddo led off the game for the Dodgers by grounding out and lining out, respectively, on a total of four pitches. This brought Robinson to the plate for the first time. On the ninth pitch of the at-bat, Robinson singled to center. Carl Furillo followed Robinson by grounding out. The Pirates went one-two-three to close the frame.

Each team scored a pair of runs in the second. Dixie Walker opened the inning with a long triple to left-center and Pee Wee Reese, catching a 3-and-1 pitch on the fat part of his bat, walloped the ball far over the outer left-field barrier for his eighth homer of the campaign.7 His 400-foot blast soared clear out of the ballpark.8 Spider Jorgensen singled to right and Ostermueller walked Gil Hodges, but he got out of the no-out situation by striking out Branca, getting Stanky to ground out, and striking out Gionfriddo. A fielding lapse by Furillo helped the Pirates tie it immediately, although both runs eventually were earned. Ralph Kiner started with a single to left and Billy Cox whacked a hit to center. When Furillo made a wild return throw, Kiner scored and Cox reached third, then scored on Elbie Fletcher’s single to right.9 Branca faced five more batters but made it through the rest of the inning without any more runs scoring.

After a couple of nonproductive innings, the fifth inning started with Stanky flying out to right; Gionfriddo walked and was out at second when Robinson hit a grounder to third. Furillo belted a single to left, which advanced Robinson to third. With Walker at the plate, the Dodgers’ baserunners saw their opening. Furillo casually stole an open second base. As Ostermueller began his long windup, Robinson broke for home. He slid safely under Dixie Howell’s tag to give the Dodgers the lead, 3-2. The crowd applauded Robinson as he strolled to the dugout.10 Number 42 stole home 19 times during his 10-year career playing for the Brooklyn Dodgers, good enough to tie Frankie Frisch for ninth all-time.11

After both teams went one-two-three in the sixth, the final Dodgers run came in the seventh after an odd break. With Gionfriddo on second and two out, Furillo swung at a third strike and tipped it. He was called out by plate umpire Bill Stewart, but a Brooklyn squawk was upheld by first-base umpire Lee Ballanfant, who ruled that the ball had lodged in Howell’s pad. The Pirates, who had left the field, had to come back, and Furillo promptly slapped a single to center to bring Gionfriddo home.12 In the Pirates’ half of the inning, Branca retired the side on a total of eight pitches, allowing only a single to Ostermueller, who was erased on Culley Rikard’s double-play grounder.

Both teams were hitless and left a total of two runners on base in the final two innings. The only action came when Branca walked Kiner and Cox with two outs in the bottom of the eighth. Fletcher, though, ended the rally by lining out to right. To end the game, Branca got Wally Westlake to fly out to left and then struck out Howell and Billy Sullivan, pinch-hitting for Ostermueller.

On April 15, 1947, Robinson was the Opening Day first baseman for the Dodgers, the first Black player in twentieth-century major-league baseball. The 28-year-old went on to bat .297, score 125 runs, steal 29 bases, and win the inaugural Rookie of the Year Award. He led the league in stolen bases twice: 1947 (29) and 1949 (37). Robinson represented the NL in the All-Star Game each season between 1949 and 1953, won the NL batting title and the MVP in 1949, and was elected to the Hall of Fame in 1962. His plague states, “Displayed tremendous courage and poise in 1947 when he integrated the modern major leagues in the face of intense adversity.” Robinson died on October 24, 1972. His uniform number, 42, was retired by the major leagues on April 15, 1997, the 50th anniversary of his breaking baseball’s color barrier.

The Dodgers won the NL title in 1947 but lost to the New York Yankees after battling through seven games in the World Series. The Dodgers drew 1,807,526 paying fans to Ebbets Field, an NL record at the time. On the road, the Dodgers drew nearly 1.9 million, also an NL record at that time. The home figures are particularly impressive considering that the Dodgers were played in a ballpark with only 34,000 seats, the league’s second smallest.13 The Dodgers’ 1947 season was later dramatized in the movie 42, which was released on April 12, 2013, and starred the late Chadwick Boseman as Robinson.

In addition to the sources cited in the Notes, the author consulted Baseball-almanac.com, Baseball-reference.com, and the National Baseball Hall of Fame site at baseballhall.org/hall-of-famers.