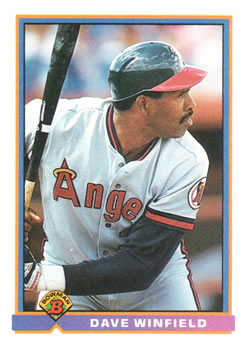 The 32,040 fans who came to Royals Stadium for a Monday night game in late June were in for a treat, as they saw California’s 39-year-old Dave Winfield become the oldest major leaguer to hit for the cycle. In addition, Kansas City’s Bill Pecota was involved in a few rare occurrences of his own. While batting, he was called out for catcher’s interference1 and later the first baseman pitched two innings for the Royals.

The Angels were about to start the final series in a 13-game road trip. They arrived in Kansas City having won four of their previous 10 games and found themselves in third place in the American League West Division, 4½ games out of first. The Royals, meanwhile, had struggled from the start of the season. They had dropped three of four games at home to the Baltimore Orioles, including a doubleheader sweep the day before the Angels arrived. The seventh-place Royals had scored eight runs in each game of the twin bill, but their pitching had allowed 11 and 9 runs, respectively. Their pitching staff was depleted. Bret Saberhagen, Mark Davis, and Steve Crawford were all on the disabled list. Also, manager Hal McRae2 had used all his relievers (and some of them twice!) in that doubleheader against Baltimore.

Chuck Finley made the start for California. He had been named the left-handed pitcher of The Sporting News’ American League All-Star Team in both 1989 and 1990, and to this point of the 1991 campaign, he was just as successful. He was in search of his 11th win, bringing an ERA of 3.79 to the contest. Kansas City countered with Hector Wagner. The right-hander had been recently called up from the Triple-A Omaha Royals and was making his second start of the season for Kansas City.

It took 26 pitches for Wagner to get through the first inning. After retiring leadoff batter Luis Polonia, Wagner walked Dave Gallagher. Wally Joyner singled through the right side of the infield, and Winfield followed with a run-producing single to center. An out later, Jack Howell singled to drive in Joyner, and the Angels had a two-run lead.

In the bottom of the inning, Brian McRae also drew a one-out walk. Pecota came to the plate and during one of his backswings, he caught Angels catcher Ron Tingley “flush on the side of the head,”3 forcing Tingley to leave the game.4 Pecota lined out, but Finley walked Danny Tartabull and Carmelo Martinez, loading the bases. Kevin Seitzer rolled a grounder into right field as both McRae and Tartabull scored, knotting the score, 2-2.

Luis Sojo opened the second inning with a double and scored on John Orton’s single into the hole at short, giving the Angels the lead again. In the third, Winfield led off with a double and advanced to third on Dave Parker’s groundout. Howell then lifted a fly ball to shallow left field for the second out, and Winfield tagged from third. Gary Thurman fired the ball to the plate, but catcher Mike Macfarlane made an error on the catch, and Winfield was safe. California now led by two runs.

In the bottom of the third, Finley “seemed intent on giving the run back,”5 allowing back-to-back one-out singles to Pecota and Tartabull. However, he struck out Martinez and retired Seitzer on a popout to first baseman Joyner, starting a string of 11 consecutive batters retired. It wasn’t until the seventh that the Royals got their next hit, when Macfarlane reached on an infield single to the hole at short. By then, the Angels had a comfortable lead.

In the top of the fifth, Wagner was touched for six consecutive hits to start the frame. Joyner singled and Winfield sent the ball well beyond the left-field wall. This was his 14th home run of the season and the 392nd of his career. Parker doubled and Howell singled, putting runners at the corners. Donnie Hill singled to right, driving in Parker, and Sojo doubled to left, scoring Howell. Manager McRae made a pitching change. Tom Gordon came on in relief of Wagner. He hit Orton with a 2-and-2 pitch, but then he retired the next three Angels batters, striking out Polonia and Gallagher. California had sent 10 men to the plate and four of them had scored, giving the Angels an 8-2 lead.

Pecota, normally a utility infield player, took the mound to relieve Kansas City’s injury-ravaged pitching staff. The first batter he faced was Winfield, who had singled in the sixth, giving him four hits so far in the game. Winfield joked, “He was pitching me tough, hitting all the corners. His ball was moving.”6 Pecota became the first Royals position player to pitch in a game since July 3, 1984, when Leon Roberts hurled one inning against the Cleveland Indians. On a 1-and-1 count, Winfield launched the ball to deep center and just kept running, not stopping until he had slid safely into third base. His triple had given him the cycle. Parker drove him in with a single through the right side of the infield. California had now built a seven-run advantage.

Joe Grahe relieved Finley to pitch the bottom of the ninth. Max Venable took over for Winfield in right field. Grahe retired Tartabull on a fly ball but then walked Martinez. Seitzer hit a drive into the right-field corner that Venable couldn’t get to. Seitzer was given credit for a double and Venable was charged with an error, allowing Seitzer to advance to third base (Martinez scored easily). However, television replays showed that Venable never touched the ball, so after the game, the official scorer changed the call to a triple. Macfarlane followed Seitzer with a single up the middle, plating Seitzer, but it was too little, too late. Grahe closed out the inning, giving the Angels a 9-4 victory.

Pecota pitched two frames (“I did it in high school,” he said7), and he continued to bat (meaning the Royals lost their designated hitter). This was the first time in 14 seasons that a pitcher had batted in an American League game. The last time occurred when Mark Littell stepped into the batter’s box against the Indians on May 21, 1977.8 Pecota faced nine batters in his two innings of work. Afterward, he said, “I just didn’t want to hit anybody. I was just trying to throw strikes.”9

Finley became just the second pitcher in the American league to win 11 games, after Minnesota’s Scott Erickson. He had struck out three, walked three (all in the first inning), and allowed two runs. In 1991 Finley made four starts against the Royals, earning three wins (with one no-decision). Wagner took the loss. This turned out to be his final appearance in a major-league game.

With his 5-for-5 performance, Winfield collected more hits than Finley allowed over eight innings. After the game, the outfielder told reporters, “I’m just very pleased to have done it. Not many players are able to do it. You have special moments in your career and this is one of them.”10 Winfield was voted the 1990 Comeback Player of the Year and in 1991 proved he still had something to offer his team. This was his second five-hit game of the season, following a 5-for-6 game against the Minnesota Twins on April 13, when he hit three home runs, drove in six runs, and scored four.

Winfield’s accomplishment was also the fourth time an Angels player had hit for the cycle, as he joined Jim Fregosi (on July 28, 1964, against the New York Yankees and on May 20, 1968, against the Boston Red Sox) and Dan Ford (on August 10, 1979, against the Seattle Mariners). Thirteen seasons would pass before Jeff DaVanon joined the list, cycling on August 25, 2004, against the Royals. Ten years after he hit for the cycle, Dave Winfield was elected to the Hall of Fame.

1 There are two types of catcher’s interference. One is on the catcher (the batter is awarded first base), and the other is on the batter. (The penalty is a called strike.) The latter interference usually occurs on backswings.

4 Pecota was charged with a strike, and John Orton entered the game, replacing Tingley.

8 Littell came on in relief in the top of the 10th inning against Cleveland and then batted in the bottom half, striking out. He pitched three innings, taking the loss when the Indians erupted for five runs in the 12th. Littell did not get a second at-bat.