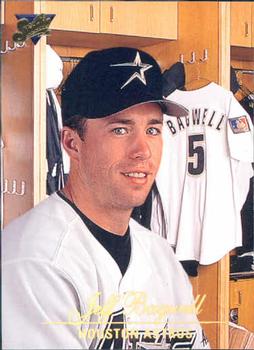 The 1994 major-league baseball season remains infamous for the players’ strike that began on August 12 and resulted in the cancellation of the remainder of the regular season and the postseason. At the time of the strike, Matt Williams of the San Francisco Giants was on a pace to match Roger Maris’ single-season home run record of 61; Tony Gwynn of the San Diego Padres was hitting .394 and had a chance to become the first player to bat .400 for a full season since Ted Williams in 1941; and the Montreal Expos, who had made the playoffs only once in their 35-year history — ironically in the strike-shortened 1981 season — had the best record in baseball at 74-40. The Houston Astros, who had won their last National League West title in 1986, were another team that lost an opportunity to try to end a playoff drought. Their 66-49 record had them only a half-game behind the Cincinnati Reds in the new NL Central Division at the time the strike began.

The Astros’ offensive leader in 1994 was first baseman Jeff Bagwell, who, in spite of winning the 1991 NL Rookie of the Year Award and posting three solid seasons to begin his career, was still largely unknown outside of Houston. Bagwell was among the NL leaders in several offensive categories that season, which led Astros left fielder Luis Gonzalez to assert, “We consider him a superstar. He should get more notoriety, with the numbers he’s putting up day after day.”1 On June 24, 1994, Bagwell had a game that catapulted him into the nation’s consciousness as he hit three home runs — including two in one inning — in a 16-4 rout of the Los Angeles Dodgers.

The Astros sent right-hander Shane Reynolds to the mound that day to oppose former 20-game winner Ramon Martinez, the brother of future Hall-of-Famer Pedro Martinez. Both pitchers were unsteady in the first two innings, with Reynolds balking once and hitting a batter and Martinez uncorking a wild pitch, but nothing hinted at the Astros’ offensive explosion to come.

Ken Caminiti led off the bottom of the second inning with a double, advanced to third on Luis Gonzalez’s groundout, and scored when Martinez unleashed a wild pitch with Andujar Cedeno at the plate. The Astros added to their lead in the third when James Mouton tapped a bunt single and Craig Biggio followed with a double to send him home. Bagwell then recorded his first RBI of the game with a single that scored Biggio for a 3-0 Astros lead, after which Martinez settled in for a time and set the Astros down in order in the fourth and fifth innings.

Reynolds allowed the Dodgers’ first run in the top of the sixth and was relieved with two outs and two runners on by Dave Veres, who retired Raul Mondesi for the final out of the inning. In the bottom of the frame, the Astros went to work on Martinez and the Dodgers bullpen. First, Bagwell hit a one-out solo home run to increase the lead to 4-1. After Caminiti walked and scored on singles by Gonzalez and Cedeno, Martinez was replaced by Roger McDowell, who fared no better. Mike Felder greeted him with a single that scored Gonzalez, and then he and Cedeno moved up when McDowell threw a wild pitch. Scott Servais reached first on a squeeze bunt that scored Cedeno, advanced to second on Veres’ sacrifice, and he and Felder scored on Mouton’s single that put a quick end to McDowell’s mound stint.

When Rudy Seanez, the Dodgers’ third pitcher of the inning, entered the game, the Astros were leading 9-1. Seanez ended up being a relief pitcher in name only as he surrendered a single to Biggio and completed a Dodger-pitchers trifecta with a wild pitch that allowed Mouton and Biggio to advance a base. The wild pitch became irrelevant when Bagwell worked a 3-and-2 count and sent the sixth pitch he saw over the right-field fence for his second homer of the inning. Seanez struck out Caminiti to end the inning, but the damage was done as the Dodgers now trailed the Astros, 12-1.

Bagwell had tied a major-league record by hitting two home runs in one inning and was only the 28th player to accomplish the feat. He joined Lee May as the second Astros hitter to homer twice in an inning; May had done so 20 years earlier, on April 29, 1974. Bagwell was not yet finished, though, and before this game was over he would tie another Astros single-game home-run record.

In the top of the seventh inning, Veres walked two of the first three Dodgers batters he faced and allowed an RBI single to Delino DeShields that made the score 12-2. The Astros got that run back in the bottom of the frame when Felder hit a two-out triple off the latest Dodgers reliever, Brian Barnes, and scored on Servais’ single. The closest the Dodgers would get to the Astros came in the top of the eighth when Chris Gwynn and Mondesi hit back-to-back solo homers off Veres. The big lead allowed Astros manager Terry Collins to let Veres finish the inning without concern and, at the end of the eighth, the Astros still held a 13-4 lead.

Los Angeles scored no more runs, but the Astros were about to pummel the Dodgers’ pitching staff some more. After Barnes retired Biggio to begin the bottom of the eighth, Bagwell hit his third homer of the game to join Jimmy Wynn, Lee May, and Glenn Davis as the only Astros to do so. Barnes came unraveled as Caminiti walked, Gonzalez singled, and Cedeno doubled them both in for a 16-4 lead that was the final score. Though Barnes allowed no additional runs, he did become the fourth Dodgers pitcher to unleash a wild pitch, and he walked pinch-hitter Andy Stankiewicz before Omar Daal relieved him and ended the inning on a fly ball by Mouton.

Once Tom Edens had set the Dodgers down in order in the ninth to seal the victory, the focus turned to Bagwell’s performance. The Astros had pounded out 17 hits to score a season-high 16 runs, and Bagwell had been at the forefront of the attack. This scenario was nothing new. Bagwell “has been carrying us the whole year,” Gonzalez said. “We’ve got a good offensive club, and he’s our horse.”2 After his four-hit, six-RBI game, Bagwell led the NL in four offensive categories: RBIs (74), extra-base hits (44), slugging percentage (.713), and total bases (185). He was second in batting average (.357) and home runs (23).

Bagwell’s teammates were frustrated that, in spite of his stellar numbers, he was still only fifth in the voting for the NL’s All-Star Game starter at first base. “If you put up All-Star numbers, you should be a starter on the All-Star team,” Caminiti argued, and he lamented that most fans and media members still asked, “Jeff who?”3

Bagwell did not share his teammates’ concern about his recognition, or lack thereof. “It’s not what the media says about you that’s important. It’s what your peers say.”4 His attitude about his All-Star status was the same: “It’s not about what a player does; it’s how a team does. We haven’t won anything yet. We need to do that first. Then, the votes will come.”5 Bagwell’s teammates need not have worried about his receiving his due. NL All-Star manager Jim Fregosi selected him as a reserve first baseman, which showed what Bagwell’s peers thought about him.

Bagwell’s season ended when he suffered a broken wrist after being hit by a pitch from the San Diego Padres’ Andy Benes on August 10, just two days before the players’ strike began. He finished the season with a .368 batting average, 39 home runs, and an NL-leading 116 RBIs and 104 runs scored, and he won the Gold Glove Award for his work at first base. The national media had noticed Bagwell, too, and he became the first Astros player to receive the NL Most Valuable Player Award. In the lost season of 1994, the award was Bagwell’s and the Astros’ gain; had it not been for the strike, he would have missed the remainder of the season and would have been far less likely to have won the MVP award.