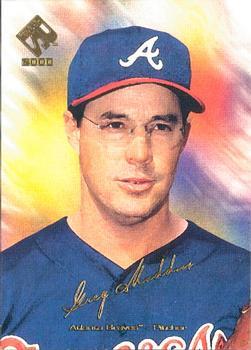 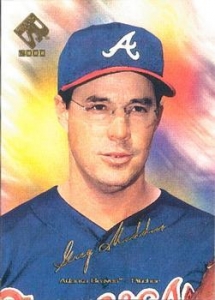 It is safe to say that most of the 49,802 people at Turner Field on June 24, 2000, to see the Atlanta Braves host the Milwaukee Brewers were not aware of MLB rule 5.02(a). Neither were the fans watching the game nationwide on WTBS, Braves owner Ted Turner’s long-running superstation.

The rule—listed under “Fielding Positions” in baseball’s official rulebook—specifies, “The catcher shall station himself directly back of the plate. … [T]he catcher must stand with both feet within the lines of the catcher’s box until the ball leaves the pitcher’s hand.”1 A team violating this rule is penalized as if its pitcher had committed a balk, which is why it is commonly known as a “catcher’s balk.”

Rule 5.02(a) is rarely enforced, usually only after a manager alerts the umpire to the catcher’s improper positioning. The rule normally doesn’t get much notice, but it played a role in this game, and led to some fallout afterward.

The Saturday evening game featured Atlanta’s Greg Maddux going up against Milwaukee’s Jamey Wright. Maddux was in the middle of another All-Star season at age 34, on his way to a third-place finish in the National League Cy Young Award voting. He had won five straight decisions and was without a loss since May 3.

Though he didn’t wind up with as stellar a season as Maddux, the 25-year-old Wright, acquired in a December 1999 trade with the Colorado Rockies, was in the middle of his own hot streak at the time and was looking for a third straight win.

Milwaukee second baseman Ronnie Belliard hit a one-hopper on the game’s first pitch, striking Maddux’s left kneecap and bouncing away for a single. Maddux was fine after stretching out a bit, and former Braves teammate Marquis Grissom stepped to the plate for Milwaukee.

During the previous night’s game, Brewers skipper Davey Lopes had been barking to the umpires that Braves catcher Javy Lopez had been setting up outside of the catcher’s box, an infraction of rule 5.02(a).2 Fernando Lunar was handling catching duties for this game, and he too was placing his right foot noticeably outside the line of the catcher’s box.

As Maddux worked his way to an 0-and-2 count on Grissom, umpire John Shulock warned Lunar about his positioning. Before the third pitch to Grissom, however, the catcher again had his foot across the line.

Umpires often shook off this infraction, but Shulock was known to be an enforcer of the rules.3 As Maddux delivered his next pitch, Shulock called a catcher’s balk and awarded second base to Belliard.

Braves manager Bobby Cox stormed out of the dugout. After a short tirade aimed at Shulock, he was ejected from the game. Even for the eventual career leader in ejections—Cox was ejected from 162 games in 29 seasons as a major-league manager—a departure two batters into the game was a short night.

While discussing what they had just witnessed, the Braves television and radio announcers noted how it appeared that the catcher’s box was smaller than usual. They speculated that the discrepancy was making it harder for Lunar to keep his feet between the lines. The lines of the box are supposed to be 43 inches apart, but the television broadcast superimposed a clip of the box over a picture of the box from a previous game, and the box was now indeed four to five inches shorter.

Belliard advanced to third base on a single by Jeromy Burnitz, then scored the first run of the game when Charlie Hayes grounded into a force play.

Maddux shrugged off the events of the first inning and nearly even pitched “a Maddux.” He completed the game in 96 pitches, giving up only six hits and one walk. Pitchers get charged with catcher’s balks, so even though Lunar was responsible for the balk Maddux was charged with it in the box score.

The only real mistake Maddux made was in the fourth inning when Burnitz hit a towering solo home run to right field for the team’s second and final run. The shot went 454 feet, breaking Ryan Klesko’s record for the longest home run at Turner Field, a 449-foot blast in September 1999.4

Normally, Atlanta’s offense would have been able to overcome Milwaukee’s two runs. But in this game Wright was effectively wild, and the Braves could not make the most of the opportunities they were handed. Wright allowed five hits, but he walked five batters.

He also hit Lunar with a pitch in the second inning. It is possible Wright was sending Lunar a message, since he also threw a pitch behind Lunar’s head in his next at-bat. But it was more likely the product of general wildness, as Chipper Jones was also hit in the fifth inning, and Wright was on his way toward leading the league with 18 batters hit (and he followed up that effort by leading the league again the next season with 20).

Only Andruw Jones was able to get to Wright, homering into the left-field bleachers in the first inning. The home run was the 100th of Jones’s career, three months past his 23rd birthday, which at the time made him the fifth-youngest player to reach the milestone.5

After Burnitz’s home run, no more runs were scored by either team over the final four innings. Closer Bob Wickman got through the ninth inning without issue for his 10th save, and Wright had his third straight win.

Maddux took the tough-luck loss but didn’t seem to take issue with the balk call that contributed to one of the runs. After the game he stated, “You can’t blame the ump. What are you going to do?”6

Of course, he may also not have wanted to draw any attention to some changes the Braves had made. Three days after the game, the Atlanta Constitution reported that the Braves “were so angry that [WTBS] aired video showing the Turner Field catcher’s box had been altered that team officials banned the cable channel’s four baseball announcers from the Braves’ charter flights.”7 Whether the Braves were upset that their broadcasters had revealed an intentional effort to aid Atlanta’s pitchers by getting more outside pitches ruled as strikes, or whether team execs merely disliked having shoddy-but-innocent groundskeeping work at Turner Field highlighted for a national audience has never been officially confirmed.8

Of course, the Braves eventually relented and allowed Skip Caray, Joe Simpson, Pete Van Wieren, and Don Sutton to travel with them again, but the point had been made. As it happened, Cox was ejected again in the Braves’ July 4 game against the Montreal Expos, in a heated discussion with umpire Derryl Cousins after Cousins warned Lunar about keeping his feet in the catcher’s box.9 If the Braves had made any adjustments to the catcher’s box before that game, it certainly was not brought up by the broadcast team.

Many fans picked up right away that the hometown Braves were up to something. Then there were the unquestioningly devoted believers in “America’s Team”10 who were watching the game, such as the author, who could only assume that the experienced grounds crew had made a mistake in drawing out the lines that day, even though they though knew the field standards like the backs of their hands.

Thanks to John Fredland for notifying me that the WTBS coverage of this game can be viewed on YouTube in its entirety. That helped with double-checking a few details of the game.

In addition to the specific sources cited in the Notes, the author used Baseball-Reference.com and Retrosheet.org for general game, player, team, and season data.

2 In the WTBS game coverage, this was part of the game discussion between Don Sutton and Pete Van Wieren immediately after the balk was called.

8 Atlanta Constitution coverage indicated, “Major League Baseball said it is looking into the incident,” but there is no record of subsequent league action against the Braves. Rogers, “Truth Won’t Fly on Braves’ Plane?”

10 The nickname was common for the Atlanta Braves at the time due to their being one of the first teams to be broadcast across the country on cable TV.