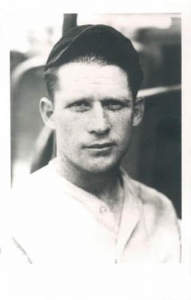 Griffith Stadium was death to home runs, yet inside-the-park home runs dictated the results in a game between the hometown Washington Senators and the Philadelphia Athletics.

Ty Cobb, playing with the A’s at age 41 in what was his final year, batted second, going 0-for-4 and showing his liability in right field. Cobb hit 46 inside-the-park home runs in his career, the third-most by a player since 1898.1 On a warm Tuesday afternoon, with temperatures in the low 80s, he played in a game in which Red Barnes became the first Senators player to hit two home runs in a game in the spacious ballpark in the nation’s capital. But they were not the garden-variety home run; rather, Barnes hit two “interior homers,” something Cobb himself accomplished on July 15, 1909, in a game coincidentally against the Senators.2

The Athletics were on the cusp of greatness.  Connie Mack had built his team with young players like Mickey Cochrane, Lefty Grove, Al Simmons, Jimmie Foxx, and Mule Haas, paired with veterans like Cobb, Tris Speaker, and Eddie Collins. The Athletics were 37-25 and in second place, 9½ games behind the Yankees. In 1929 they overtook the Yankees, to win the first of three consecutive pennants.

Under player-manager Bucky Harris, the Senators were in a decline from their days as American League champions in 1924 and 1925. The core of the 1924 World Series champions, however – Harris, Sam Rice, Goose Goslin, and Joe Judge – were still producing. To fill holes, the team brought in veterans like George Sisler and young prospects like Joe Cronin. The Senators were 29-33, mired in fourth place and 17½ games behind the first-place Yankees.

For the Senators to win, Goslin had to be in the lineup but Harris “had secret fears that (Goslin’s) days were numbered.”3 Goslin was leading the AL in batting but his right arm hurt. Long-term rest was prescribed. He tried “baking, massages and the violet ray,”4 to no avail. The pain affected his outfield play so much that he practiced throwing the bas eball with his left arm.5 When the team was in Detroit, Goslin traveled to Battle Creek to Bonesetter Sweet, a chiropractor who had supposedly alleviated Babe Ruth’s aching wrist. Goslin came away with worse pain.6 He was done babying the arm. Prior to June 26, he threw in practice with pain but decided he could deal with it. In the game, Goslin made two putouts, batting cleanup and going 1-for-3 with a “screaming double to right.”7 In the bottom of the second, “the fans broke into a cheer when [Goslin] made a short, but direct throw” back to the infield after Bing Miller singled.8 By the end of the game, Harris was likely relieved that Goslin was back in action.

Playing center field and batting third for the Senators, Barnes was a difference maker as “a new Napoleon of the bat, [who] unloosed two fiery interior home runs,”9 each with Harris on base, driving in all the runs in a 4-1 victory.

The day’s starting pitchers, Milt Gaston of the Senators and Eddie Rommel for Philadelphia, both pitched well enough to win. One did. Gaston “went through the scorched Macks like an elephant through a Main Line garden.”10 The description of Gaston’s performance belied his dominance: “knocked ’em off with such cyclic regularity that only thirty-three gray-garbed bat carriers faced him. …”11

Gaston had a complete game, with three hits, two walks, and three strikeouts, giving up an unearned run for his second win against five losses. However, Gaston did not pitch to the Senators’ expectations that season. He finished 6-12 with a 5.51 ERA in 22 starts with three shutouts. In 1928, Rommel was a spot starter, going 13-5 with a 3.06 ERA. In an eight-inning complete game, he gave up five hits and four runs, three earned, with a walk and a strikeout for his third loss against three wins. It was not enough.

Starting off the game, Gaston faced Jimmy Dykes, who flied out to Goslin in left field. Cobb popped out to the shortstop. Gaston walked Cochrane but forced Simmons to pop out to second baseman Harris. In the bottom of the first, the Senators scored all the runs needed to win the game, aided by shoddy Philadelphia defense. Rice led off, grounding to second. Harris reached base on a poorly played line drive to Simmons, who dropped the ball “after staggering like an inebriate to make the catch.”12 Barnes followed, delivering “a virile liner” down the edge of the stands in left that Simmons misplayed, bouncing into the pocket in left for “an interior home run.”13 The score was 2-0 and Rommel efficiently dispatched Goslin and Bobby Reeves to finish the inning.

The A’s scored an unearned run in the top of the seventh. Sammy Hale reached base via an error by the shortstop Reeves, and ended up reaching third on Miller’s double to center field. Joe Boley’s fly ball drove Miller home, enabling the A’s “to score a shady run … the only Pennsylvania visitation to the pentagon.”14 The score was 2-1. In the bottom of the eighth, an almost exact replay from the first inning occurred. With two outs, Harris roped a single to left. Then Barnes “lofted the ball” to Cubb in right field “who made a desperate try for a one-hand grab. He barely missed the sphere” as the ball rolled “between the field boxes and pavilion.”15 Barnes was rounding third when Cobb picked up the ball. It was 4-1, with Gaston quietly putting away Simmons, Foxx, and Hale in the top of the ninth. The entire game was over in 1 hour and 12 minutes. The first six innings were played in 43 minutes.16

Frank Young of the Washington Post highlighted Barnes’s day: “[B]eing a newly wed, the three suits of clothes which Red Barnes won himself with homers since he joined the ‘matrimonial league’ will come in mighty handy.”17 For the Post’s Shirley Povich, the game was decided by Gaston’s great pitching and Barnes’s hits that were made homers by Cobb’s “aging legs” and Simmons’s “lamentable outfielding.”18 However, the errors were not deserving: “[B]oth balls took educated hops off (Simmons and Cobb’s) immediate reach.”19

Jimmie “The Beast” Foxx started at first for the A’s and was a year away from his breakthrough season. His power became legendary, as Lefty Gomez later noted: “When Neil Armstrong first set foot on the moon, he and all the space scientists were puzzled by an unidentifiable white object. I knew immediately what it was. That was a home-run ball hit off me in 1937 by Jimmie Foxx.”20 Foxx entered the game with a 15-game hitting streak. Gaston silenced the streak. Going 0-for-4, “the Prince of Wales of swat was denied admittance to the hit column today.”21

Defense let Rommel down. The knuckleballing Rommel pitched a game worthy of a win but “was beaten by the superb art of Gaston”22 and “[S]ave for the two home runs, Rommel might have had a shut-out and a 1-0 victory.”23 He deserved a better result “as four runs were woefully tainted.”24 Rommel was an AL umpire from 1938 to 1959, becoming the third man to appear in the World Series as both a player and an umpire. In 1956 he became the first umpire to wear glasses.25

Emile “Red” Barnes achieved an unique accomplishment with his two “interior homers.” Well-known from his time on the 1925 and 1926 Alabama University football teams as captain, quarterback, defensive lineman, and punter, he led Alabama to its third consecutive Southern League championship and its second consecutive Rose Bowl appearance, a 7-7 tie with Stanford.26 Barnes had a short major-league career with the Senators and Chicago White Sox, from 1927 through 1930. His 1928 rookie year was his best season, and on June 26, Barnes hit two of his eight career homers and drove in four of his 97 career RBIs. Barnes would later play and manage in the minors, and after that served as the postmaster in Suggsville, Alabama, until his death at 55 on July 3, 1959.27 Who else can boast he was the starting quarterback in the Rose Bowl and also hit two inside-the-park home runs in a major-league baseball game?