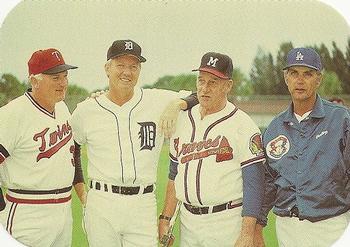 “Give me an Old-Timers Classic over the All-Star Game any day,” wrote Tom Boswell in the Washington Post on the eve of the June 29, 1987, game. “I’m trying to remember the 1986 All-Star Game. Nope, sorry, it’s completely gone. … A player in his prime should care and try.”1 And too often in All-Star Games, it’s evident that the players are going through the motions. Already gone in 1987 were the days when the stars of one league really tried – hard – to beat the stars of the other league.

With old-timer’s games, it’s a whole other matter. The participants aren’t playing for a pennant. They’re not that worried about pulling a hamstring before returning to the championship season fray in earnest.

The 1987 game wasn’t just three innings of exhibition ball played prior to a regularly-scheduled major-league game. It was a full-fledged affair that drew 23,115 paying spectators to Washington’s Robert F. Kennedy Stadium. And why not? The game featured 18 present or future Hall of Famers.2

A perusal of June 30 newspapers indicates there was a lot going on in baseball on this very day. A four-game Northwest League series in Boise between the Boise Hawks and the Bend (Oregon) Ducks featured a first: It was Class-A baseball but notable because it was said to mark “the first time two black managers have opposed each other in the history of professional baseball.”3

In an apparently unrelated matter, Rev. Jesse Jackson of Operation PUSH announced that a threatened black boycott of major-league ballparks, set to begin on the Fourth of July, was being called off because Commissioner Peter Ueberroth had demonstrated “public commitment” to affirmative action, hiring Dr. Harry Edwards to serve on his staff and hiring a consulting firm to design plans for each of the 26 major-league teams. The boycott had been scheduled after Dodgers executive Al Campanis had said on ABC that “blacks” did not have the “necessities” to be managers and GMs.4

The Illinois Senate passed a bill, 55-1, that exempted Wrigley Field from Illinois nighttime noise-emission restrictions, thus permitting playoff, World Series, and All-Star Games to be played in the heavily populated neighborhood. Though regular-season games were not exempted, their day would come the following year.5

Were the baseballs used at RFK in the Old Timers Baseball Classic extra-lively balls? They were “top-quality Rawlings balls,” wrote Boswell, “though not the same model as the majors.”6 That raises more questions than it answers, when looking back at the game 30 years later.

The scoring started early, and both teams rang up big totals. There were 13 home runs in the game, and one of the most dramatic reversals of fortune in a ballgame. Early Wynn threw the very first pitch of the game, but then departed. Jim Perry started for the American League, and was hit hard. Lou Brock singled, leading off. Billy Williams followed with a single of his own and then Hank Aaron homered on a 1-and-0 pitch, hitting the ball into the left-field stands. Dick Allen was up next. He hit a 1-and-0 pitch out of the park in center field. By the time the inning was over, Perry was charged with seven hits and seven earned runs and he never got anybody out. He was relieved by Bob Feller, who got three outs to retire the side but not before he had given up two more runs. It was 9-0 in favor of the National League before the AL got up to bat. American League manager Luke Appling must have been more than a little discouraged.

Warren Spahn started the bottom of the first inning, allowing one hit and leaving the game without recording an out. Gaylord Perry took over and pitched better than his brother Jim, working both the first and second innings without either a base hit or a base on balls. The NL had meanwhile added two more runs in the second inning, on solo home runs off Catfish Hunter by Roy McMillan and Orlando Cepeda. It was 11-0 after two. Hunter held the Nationals scoreless in the third inning.

Then the American League began its comeback. Jim Bunning was on the mound for the Nationals. Rocky Colavito singled off Bunning. So did Bill Freehan and so did Hunter. The bases were loaded, with no outs. Dick McAuliffe had taken over for the 1-for-1 Johnny Pesky at short. He took a 1-and-1 pitch and hammered it out to right-center. It was 11-4. The inning was far from over.

Cookie Rojas reached on an error and Willie Horton homered to left field. 11-6. Boog Powell homered to right field. It was 11-7. Brooks Robinson singled, bringing up Colavito once more. He homered just beyond the reach of Billy Williams in left field. 11-9. Freehan got his second hit of the inning, too, a double – at which point NL manager Bill Virdon brought in Johnny Podres to relieve Bunning. Hunter was up. Hunter homered, 400 feet to center field. The game was tied, 11-11.

Hunter said after the game, “I’m going to tell my American Legion boys about that. When they get behind, the always give up.”7 Joe Garagiola, the NL catcher through the big barrage, was asked what pitches he was calling. He admitted they hadn’t established any signs, saying, “It didn’t matter. I kept calling for the ball. It never got to me.”8

Milt Pappas pitched the fourth inning and the National League did not score, or reach base.

AL batters resumed their bombardment, however. Once more, it was a grand slam that kicked off the scoring and, once more, it didn’t stop there. Podres let a few Americans get on base and then Ralph Branca came in. Rocky Colavito hit a grand slam, and the AL took a 15-11 lead. That accounted for only half the runs the AL scored in the fourth. After an error and a single by Bob Allison, McAuliffe singled in another run. Then Willie Horton hit a Branca pitch to center field and it was 19-11, American League.

In the fifth inning, Ned Garver and Jim Kaat split pitching duties and held the NL to just one hit. Bill Stoneman took over pitching for the National League. American League batters scored five more runs. Jim Price reached base and Bob Allison homered. Willie Horton came up and hit his third home run of the game. He had eight runs batted in.

“That game was one of the damnedest things I ever saw in baseball,” Boog Powell said afterward. “Bunch of old guys hitting rockets like that. We got excited.”9

No play-by-play for the game could be located, so the author relied exclusively on the sources cited in the Notes, which fortunately included a box score in the David Aldridge article.

2 Ten were on the American League squad and eight were on the National League squad. Hall of Famers who appeared in the game but are not mentioned in the above text were Bobby Doerr, Harmon Killebrew, Bill Mazeroski, and Enos Slaughter.

4 Paul Sullivan, “PUSH Cites Progress, Calls Off Boycott,” Chicago Tribune, June 30, 1987: C1. Billy Martin had griped that Jackson was a politician and shouldn’t get involved in sports. Hank Aaron, Braves VP at the time, responded, “If it had not been for politics, we would not be able to vote. I think politics needs to be injected into sports.”

8 Ibid. Garagiola added, “Bunning was just laying them in there. It’s a tribute to him, because the fans loved it.”