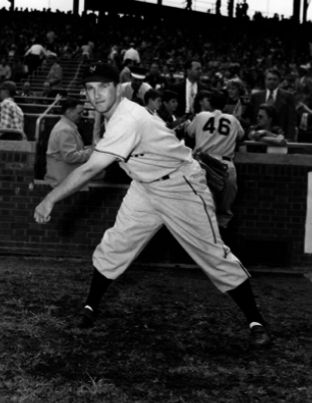 The New York Giants were on an upswing when they headed to the Polo Grounds on Sunday morning, June 3, 1951, for a doubleheader with the St. Louis Cardinals, the sixth and seventh games of a 14-game homestand. They had won seven of the previous nine games to improve their record to 23-21, moving from sixth into a tie for third place with the Chicago Cubs and Boston Braves. The last time the Giants and Cardinals played in New York, the Giants had swept a three-game set (May 8-10); however, the memory of Giants’ two-game loss at Sportsman’s Park in St. Louis two weeks earlier (May 20-21) was no doubt fresh on the minds of manager Leo Durocher’s players. In 1951 the St. Louis Cardinals were a team in transition. They had slipped to fifth place in 1950, their worst showing since 1938. But like the Giants, the Cardinals were playing well, having won nine of their last 14, and were in second place, three games behind the Brooklyn Dodgers, with a record of 22-19.

The starting pitchers for the first game of the doubleheader were two well-known southpaws, Dave Koslo and Max Lanier. The 31-year-old Koslo, the dean of the Giants staff and in his eighth season, was a rubber-armed starter and reliever who averaged 206 innings the previous five years, led the NL in ERA in 1949 (2.50), and had a 65-77 career record. He had fallen out of favor with Durocher and was making just his second start of the season. But Koslo was no stranger to the Cardinals, whom he beat in four out of five decisions in 1950, including a stellar two-hit shutout on June 22. Max Lanier, the 35-year-old former anchor of the strong Cardinal staffs during their three consecutive pennants (1942-1944), was perhaps best remembered for jumping to the outlaw Mexican League in 1946. He was subsequently suspended by Commissioner A.B. “Happy” Chandler and was reinstated in 1949, having lost three years of his prime. The former National League ERA leader (1.90 in 1943) owned a 92-63 record and was in the 12th season of his 14-year major-league career.

The two veteran pitchers treated the 32,564 spectators to a classic pitching duel.1 Koslo started out the game strong, holding the Cardinals hitless through 4⅔ innings before Nippy Jones reached base on an error by first baseman Whitey Lockman. After Jones was caught stealing, center fielder Peanuts Lowrey singled to center. Koslo induced catcher Del Rice to ground out to shortstop Alvin Dark to end the inning. Koslo, who often battled control problems, issued only two walks in the game (to Enos Slaughter in the second and Stan Musial in the fourth). Musial nicked Koslo for a slow-rolling single to lead off the seventh and beat Dark’s throw to first base by a “split second.”2 After second baseman Billy Johnson executed a sacrifice bunt to move Red Schoendienst to second, Koslo retired Slaughter and Nippy Jones to quell a rally.

After a 1-2-3 first inning, Lanier ran into trouble in the second. With two outs he walked right fielder Monte Irvin; then 20-year-old rookie Willie Mays, batting seventh, hit a double down the right-field line. After intentionally walking Hank Thompson to fill the bases, Lanier ended the threat by striking out Koslo. Lanier surrendered a single to Giants leadoff hitter Eddie Stanky to begin the third inning, and then hit his stride. He erased Stanky on a double play, the first of 14 consecutive retired batters through the seventh inning.

As the eighth inning began, both hurlers were working on sparkling two-hit shutouts. After Koslo set down the side in order, Mays led off the bottom of the eighth by belting a double over first baseman Nippy Jones’s head. Playing it safe, Durocher had Thompson sacrifice Mays to third. But the rally seemed to stall when Koslo grounded to second baseman Red Schoendienst. Stanky, a career .268 hitter but batting .301 at the time, dug in against Lanier. Perhaps Lanier should have played the percentages and walked Stanky, who batted .418 and slugged .500 in his career against Lanier. The 35-year-old hit a solid line-drive single to left field, scoring Mays. First baseman Whitey Lockman flied out to Musial, playing left field, to end the ending. Koslo set down Stan Rojek, Schoendienst, and Musial in order in the ninth, to end the game, which took only one hour and 44 minutes to play.

“So dazzling was Koslo’s hurling,” wrote John Drebinger in the New York Times, “that as the innings rolled by there was a great deal of eyebrow lifting among those in the press box as to why Leo has been keeping the stocky Wisconsin southpaw under wraps.”3 The Giants staff was led by a trio of right-handers (Sal Maglie, Larry Jansen, and Jim Hearn) who started a combined 105 games, and sorely need a productive left-hander. Lefties Roger Bowman, 23 years old, and Monty Kennedy, 29, each made five starts during the season, though Bowman struggled. Koslo, whose performance Joe Reichler of the Associated Press described as “brilliant,” made 14 more starts among his 39 appearances during the season en route to a 10-9 record.4 Koslo tossed three more complete-game victories against the Cardinals in 1951, including his fourth and final two-hitter, on August 4 (he never had a one-hitter or no-hitter).

The Giants lost the second game of the doubleheader (another battle of lefties, Harry Brecheen and Bowman), 4-3, to fall to 4 ½ games behind the Dodgers, in sole possession of third place.