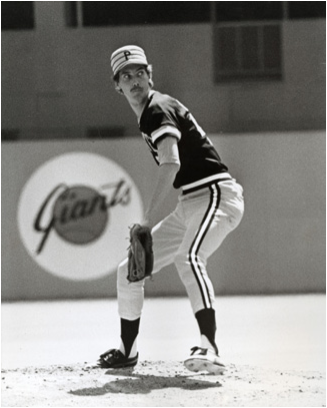 As shortstop Tim Foli caught Dave Winfield’s popup to secure Bruce Kison’s sparkling one-hit shutout against the San Diego Padres, the rail-thin right-handed hurler with a wicked slider raised his hand in what might have looked like a sign of accomplishment or relief. But it wasn’t. Kison was angrily pointing to the press box, where sat the official scorer, who in the eighth inning had ruled a tough-hop grounder to third base a hit and not an error. “It was a once-in-a-lifetime thing for me,” said Kison, still fuming after the game. “Of course, I wanted it [a no-hitter] bad. Real bad. I thought under the circumstances, he could have called it an error.”1

As the Pirates warmed up before the contest at Three Rivers Stadium on Sunday, June 3, 1979, to play the rubber match of a three-game set with the Padres, manager Chuck Tanner’s squad had been playing good ball recently. The Bucs had won six straight games before 40-year-old ageless wonder Gaylord Perry stopped them on four hits in a 3-1 loss the night before. At 24-22, Pittsburgh was in fourth place in the NL East, five games behind Montreal. The 25-30 Padres, perennial also-rans who had recorded the first winning campaign in the franchise’s 10-year history (84-78) the year before under rookie skipper Roger Craig, occupied fifth place in the NL West, trailing Houston by 6½ games.

Scheduled to start for the Pirates was right-hander Don Robinson. Just minutes before the game, the second-year hurler informed Tanner that he couldn’t get loose. The affable Tanner turned to Kison as an emergency starter. “He was rested the most,” said Tanner, who also explained his game plan. “I hoped he could give us a few innings. … [starter] Bert Blyleven volunteered to pitch two or three innings in the middle, and then I would use Kent Tekulve as long as I could and finish up with Grant Jackson or Enrique Romo.”2

Affectionately called Buster by his teammates, Kison started the season in the rotation, but two dismal outings in April, coupled with chronic blisters on the middle finger of his pitching hand prohibiting him from pitching deep in the game, sent him to the bullpen. The ultra-competitive Kison, who was known for his brushback pitches, was no stranger to big games. As a rookie in 1971, he blanked the Baltimore Orioles on one hit in a 6⅓-inning relief appearance to win Game Four of the World Series. Along with his stellar 4-0 postseason record, the 29-year-old right-hander owned a 70-57 record in parts of nine big-league seasons, but had not achieved the success or stardom some had predicted.

The start of the game was delayed by about 10 minutes as Kison rushed to warm up. On a balmy late-spring day with temperatures reaching the 80s in the Steel City, the game drew a scant crowd of 13,370 to Three Rivers Stadium.

After Kison got through the first inning, yielding only a two-out walk to Winfield, who subsequently stole second base, the Pirates wasted no time attacking Padres left-hander Bob Owchinko, who came into the game with a 21-28 record in parts of four seasons. With Foli and Dave Parker on base, courtesy of one-out singles, Bill Robinson spanked a three-run home run to get the Pirates on the board. Seeing action at first base in place of Willie Stargell, the right-hand-hitting Robinson was normally part of Tanner’s platoon system with John Milner in left field.

The offensive fireworks continued for the Pirates in the third. Omar Moreno, better known for his feet than his bat (he led the NL with 71 and 77 stolen bases in 1978 and 1979, respectively), led off with a solo shot to left-center to improve his hitting streak to 15 games. Two batters later, Parker launched one over the fence in right field for his ninth homer and a 5-0 Pirates lead. The next batter, cleanup hitter Robinson, connected for his second blast and his team-high 12th homer of the season to send Owchinko to the showers. “Robinson is having a great year,” said Tanner.3 Reliever Bob Shirley set down eight of the nine Pirates he faced, yielding only a single to Rennie Stennett. Pittsburgh picked up its final run on Lee Lacy’s leadoff homer in the sixth to make it 7-0.

Kison, who had not tossed a complete game since he defeated Montreal 10-2 on June 25, 1977, looked sharp. He whiffed the side in the second, and cruised along, scrapping Tanner’s plan to use Blyleven in the middle innings. “[Kison’s] slider was outstanding,” said batterymate Steve Nicosia. “It was on the outside corner 85 or 90 percent of the time. He threw about 70 percent sliders.”4

Dan Briggs hit what turned out to be the Padres’ only hard-hit ball of the game with one out in the seventh. Parker, en route to winning his third straight Gold Glove Award in right field, made a nice leaping catch to preserve the no-hitter. “I thought that ball was gone,” admitted Kison after the game. “Dave made it look easy, but my heart was pounding.”5

Kison was just four outs away from the sixth no-hitter in Pirates history and the first since teammate John Candelaria held the Los Angeles Dodgers hitless on August 9, 1976, when third baseman Barry Evans, a befreckled 22-year-old batting a miserable .197, stepped to the plate. He did not “fit the spoiler mold,” wrote Phil Axelrod of the Pittsburgh Post-Gazette, but Evans hit a tricky shot to third base.6 According to Charley Feeney, also of the Post-Gazette, third sacker Phil Garner was “playing about eight feet wide of the bag, moved a step, maybe two, and then tried to backhand the ball.”7 The ball hit the tip of his glove and rolled into left field. According to Dan Donovan, the official scorer for the game, all four accredited scorers in the press box, two from each team, agreed unanimously that it was a hit, eliciting moans of disapproval from the spectators.8 Evans reached second base on the play and was credited with a double.

“I thought I had it,” said the versatile Garner, who started games at third, second, and short for the Bucs in ’79. “Then it hit the dirt and kicked off down the line. It just touched the very end of my glove.”9 He also admitted that had the game been close, he would have played closer to the line and would have probably fielded the ball cleanly.10 Evans disagreed. “Even if [Garner] gets the ball,” he said, “he probably has to eat it. I don’t think he would have thrown me out.”11 The Padres third-base coach, Doug Rader, a five-time Gold Glove winner at the hot corner, was emphatic in his evaluation: “A base hit all the way.”12 Bucs backstop Nicosia was less convinced: “It could have gone either way.”13

Visibly upset by the official ruling, Kison regained composure to retire Bill Almon on a fly ball to left for the final out in the eighth and then polished off the Padres in a 1-2-3 ninth to record his third victory of the season.

After Kison’s remonstrations on the mound, he and his teammates retired to the clubhouse. The normally congenial hurler refused to speak to reporters for about 40 minutes, though Tanner was quick to offer praise. “That was the finest I’ve ever seen him pitch,” said the skipper of Kison’s first of two career one-hitters.”14 Tanner, always with the big picture in mind, viewed Kison’s excellent performance in the context of the pitcher’s future. “The no-hitter would have been great,” opined Tanner, “but the big thing is that Bruce didn’t have any problems with his pitching hand.”15

Some members of the Pittsburgh media, upset with the way Kison vilified them, excoriated him in the press. “Instead of being happy, Kison was angry,” wrote Pittsburgh Press correspondent Dan Donovan. “Instead of an extraordinary one-hitter, Kison thought he should have had one of the most remarkable no-hitters in baseball history.” Ultimately the brouhaha led to a significant change. Feeney and Donovan resigned as official scorers and the local press initiated a new policy that prohibited Pittsburgh sportswriters from serving as scorers.

8 Donovan, the official scorer, reported that there were four writers in the press box at the time who were accredited scorers (himself, Charley Feeney of the Pittsburgh Post-Gazette, and two from the Padres). It would have been highly unusual if there had been more than one “official” scorer.