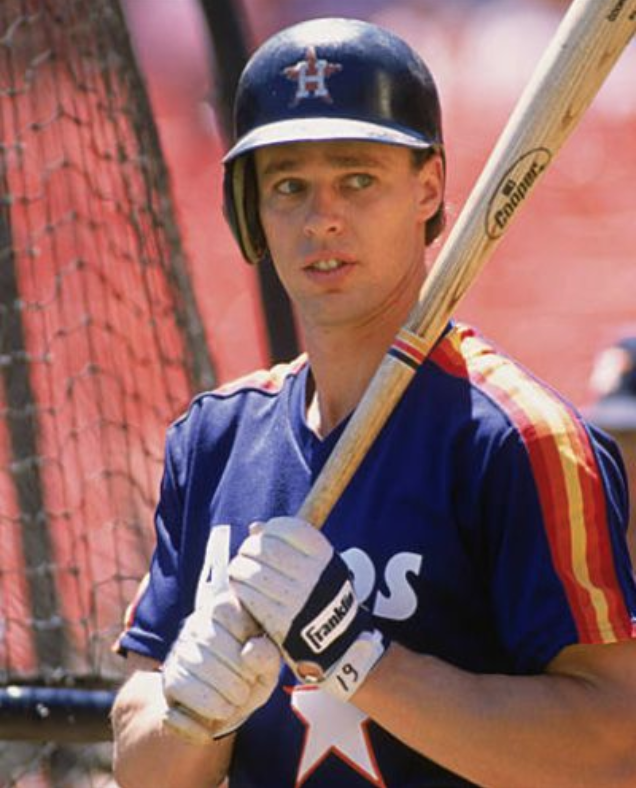 The marathon 22-inning game of the preceding night left Houston Astros and Los Angeles Dodgers players mentally and physically exhausted. Nevertheless, the teams had one more game to the series left on June 4, 1989. The Astros trudged their way into the Astrodome around noon to prepare for Sunday’s game, but their pregame agenda on the wall noted only one item: “Flex, 1pm.” No batting practice. No infield. Flex. The pre-game note for the players surprised Astros manager Art Howe: “I don’t think I’ve ever seen a game where two teams just came to the park, put on their uniforms and went at it.”1

After the previous game had ended at 2:50 a.m, players scrambled to get a few hours of sleep before Sunday’s 1 p.m. scheduled start. Astros first baseman Glenn Davis spent the night on a bunk in the team lounge behind the Astros weight room. “I’ve slept in worse,” Davis said of his makeshift accommodations. “Being an outdoors guy, I’ve learned to rough it.”2 At 12:30 p.m., less than an hour before the national anthem, Davis got the wakeup call. “I’ll be up in about 30 minutes,” Davis said as he shuffled into the clubhouse. Sunday’s starting pitcher for the Astros, Bob Forsch (1-1, 3.90 ERA), told Davis. “I give your wife a lot of credit having to wake up next to that every morning.”3

The win against the Dodgers the night before meant that the Astros winning streak had reached nine games and put them only 1½ games behind the first-place San Francisco Giants in the National League West Division. The Dodgers, on the other hand, sent Tim Belcher (4-4, 2.95 ERA) to the mound for Sunday’s game as the team tried to salvage a game in the series.

The Dodgers appeared refreshed from the previous night as Chris Gwynn, Dave Anderson, and Kirk Gibson hit consecutive singles in the top of the first. Gwynn scored from third when Eddie Murray flied out to center. Kirk Gibson then stole second, Forsch intentionally walked Mike Davis to load the bases, and then Mike Scioscia cleared the bases with a grand slam. Indeed, before most Astros fans had taken their seats, the Dodgers led 5-0. Jeff Hamilton, the everyday third baseman and losing Dodgers pitcher from the previous night, got a little revenge for the loss by doubling Scioscia home in the third to increase the lead to 6-0. Any momentum Houston might have had coming into Sunday’s game from the previous night seemed long gone by the third inning.

In the bottom of the second, Greg Gross got Astros first hit, but the team failed to score against Belcher. Over the first four innings, Belcher struck out five Astros while allowing only two hits. Belcher cruised along until the bottom of the fifth when the Dodger’s momentum turned on a disputed call.

After Gross flied out to center field, Rafael Ramirez, the hero from the previous night’s game, beat out a roller to second for an infield hit. Craig Reynolds singled and the Astros’ young catcher, Craig Biggio, drew a walk to load the bases. Billy Hatcher, pinch-hitting for Forsch, stepped up to the plate. The speedy Hatcher hit a groundball to first baseman Murray, who threw to Belcher, covering at first base. “I didn’t have to see the replay,” Belcher said, “In my opinion, it wasn’t even close.”4 First base umpire Paul Runge disagreed and called Hatcher safe. Although TV replay clearly showed that Hatcher was out, the umpire’s call stood. Ramirez scored from third to give the Astros their first run. The controversial play changed the entire complexion of the game when the next batter, Louie Meadows, who started the game in left for Hatcher, launched a grand slam – his first home run of the season – over the right-field wall to make the score Dodgers 6, Astros 5.

“I’d be the first one in line to congratulate Louis Meadows for hitting the … out of the ball,” Belcher said after the game, “but, in my opinion, the whole inning was set up by a bad call at first base. If we get the correct call there, it’s a different inning.”5 Meadows’ slam marked the first time in the 24-year history of the Astrodome in which one game featured two grand slams.

Despite giving up five runs to the Astros in the fifth inning and perhaps because the Dodgers’ bullpen needed rest from the night before, Belcher remained in the game. Manager Tom Lasorda’s decision to keep him in paid off as he gave up only two more hits over the sixth, seventh, and eighth innings. Houston relievers Dan Schatzeder and Danny Darwin also kept the Dodgers’ bats quiet from the sixth inning through the top of the ninth.

Jay Howell replaced Belcher in the bottom of the ninth and retired the first two batters. Craig Biggio then stepped up to the plate, with both his nine-game hitting streak and the Astros’ nine-game winning streak on the line. Bill Brown, Astros announcer, said it best on the call: “To left field, and … it’s … gonna … go, home run! Biggio has tied it!”6 Biggio’s blast landed 390 feet from home plate. “I threw it and he hit it. … That’s about the size of it,” Howell said.

For the second straight game, the Astros and Dodgers headed to extra innings. The Dodgers, who had managed only four hits off Astros pitching since the fourth inning, threatened in the top of the 12th against the Astros’ closer, Dave Smith. Willie Randolph led off the inning with a single, but was caught stealing on a laser from Biggio to second baseman Bill Doran. Chris Gwynn then hit a triple that would have scored Randolph had he not been thrown out at second. On the next play, Anderson hit a fly ball to left on which Gwynn tagged up and attempted to score. Reynolds, who normally played shortstop and was playing the outfield for just the fourth time in his 15-year career, made a shoestring catch and threw a one-bounce strike to Biggio, who blocked the plate and tagged out Gwynn to preserve the tie. Brown exulted, “What a play by Reynolds in left! That is one of the great plays of this season! He is not an outfielder by trade and [Reynolds] just gambled all the way.”7

An inning later, former Cy Young Award winner Mike Scott, who had pitched a four-hit shutout against Dodgers ace Fernando Valenzuela two nights earlier, made his first relief appearance for the Astros since 1985. After Scott retired the first two batters, Jose Gonzalez tripled and Scioscia walked. But Scott struck out pinch-hitter Rick Dempsey to end the threat and send the game to the bottom of the 13th.

The Dodgers’ Alejandro Pena faced Doran to begin the bottom of the inning and walked him. With Ramirez at the plate, Doran lit off for second. When Dempsey’s throw to Randolph sailed over his head and into center field, Doran made his way to third. Pena then intentionally walked both Ramirez and Reynolds to set up a force play at every base. Biggio came up to bat and hit a sharp grounder to second. Randolph gloved it and fired an unbelievable throw to home to force Doran. With one out and no more pinch-hitters available, Howe decided to let Scott, a bad hitter,(3-for-29, .103), hit for himself. Scott hit the first pitch to center field. Ramirez tagged at third and scampered home with the game-winning run. “And instead of winning it with his arm,” Bill Worrell said on the broadcast, “the Cy Young Award winner from two years ago wins it with his bat.”8

The Dodgers left Houston after the game with their bullpen spent. Belcher, who had gone eight innings and given up five runs while walking one and striking out six, could not wait to leave the Astrodome. “I’m just glad to be getting the hell out of here,” he told reporters. “These guys could beat the ’27 Yankees, the way they’re playing.”9