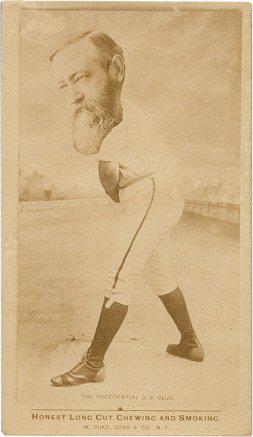 “I used to go to a game in Indianapolis once in a while, and also in Chicago, and I always enjoyed it,” said Benjamin Harrison, the newly elected U.S. president, in 1889. “I find a good deal of pleasure in watching a good game of ball.”1 On Monday, June 6, 1892, Harrison became the first sitting president to attend a major-league game. The contest between the Cincinnati Reds and Washington Senators was played at Boundary Field, two miles from the White House.

Harrison arrived at the ballpark in a stately horse-drawn carriage and was seated prominently in the first row of the press box, above the grandstand. He wore a large black derby, a frock coat, a white shirt and a black necktie. One hand rested on an ornamental cane. The ballplayers gazed up at him from the field, and the 2,400 fans were abuzz over the distinguished visitor.

The starting pitchers were right-hander Cyclone Duryea for the Reds and southpaw Phil Knell of the Senators. Both hurlers allowed just one run over the first five innings. According to observers in the press box, the president watched the game intently and rooted for the home team in a quiet, dignified manner.

The Senators scored in the first inning when Paul Radford walked, stole second base, advanced to third on a sacrifice, and came home on a throwing error by Reds shortstop Germany Smith. In the fourth inning, Pete Browning’s bunt single preceded a single past first base by Cincinnati player-manager Charlie Comiskey, which sent Browning to third. When Comiskey attempted to steal second, Washington catcher Jocko Milligan threw the ball, but neither second baseman Tommy Dowd nor shortstop Danny Richardson was there in time to catch it and it bounded into center field. Browning came home on the miscue.

Arlie Latham, the third baseman and third-base coach of the Reds, was “the clown prince of baseball.”2 With the president in attendance, Latham was subdued, but at one point he “made a fuss and the President smiled at his antics.”3

The Reds rallied in the top of the sixth. Latham drew a base on balls. Tip O’Neill doubled to left field, moving Latham to third base, and Bug Holliday singled over short to drive in Latham. Browning walked to load the bases, and Comiskey singled to center field, scoring O’Neill and Holliday. The president left the game in the bottom of the sixth with the Reds leading 4-1, though the game was far from over.

The Senators scored a run in the bottom of the eighth. In the bottom of the ninth, 5-foot-5 Charlie “Home Run” Duffee drove the ball to the fence in right-center field; he might have had a home run, but with the Senators trailing by two runs, manager Arthur Irwin held him at third. Comiskey then changed pitchers, replacing Duryea with Tony Mullane.

Richardson reached base on Smith’s second error of the game while Duffee scored, and Knell sacrificed to move Richardson into scoring position. Yank Robinson’s grounder was handled in the infield and Richardson was caught in a rundown. As Robinson tried to reach second base on the play, Mullane’s throw hit him on the shoulder and caromed into the outfield, allowing him to come all the way around to score the tying run. The Washington fans cheered wildly.

Both teams had a chance to score in the 10th inning but came up empty. The Reds loaded the bases in the top half but were thwarted by a fine defensive play by Robinson at third base. In the bottom half the Senators’ Dummy Hoy, a deaf mute, reached third base via an error, stolen base, and sacrifice, but was left stranded there.

The Reds took the lead in the top of the 11th. After Smith grounded out to lead off, Morgan Murphy and Mullane singled. Bid McPhee grounded into what should have been a double play, but Mullane slid forcefully into Tommy Dowd at second base to prevent his throw to first. Latham singled, scoring Murphy, and O’Neill walked to fill the bases. Holliday stroked a single to center field, driving in McPhee and Latham, and was thrown out trying to stretch it to a double.

Mullane retired the Senators in order in the bottom half to secure the victory. The final score was Cincinnati 7, Washington 4.

Harrison could be excused for his early exit from the game. Upon his mind was the Republican National Convention, to be held over the next four days in Minneapolis. He did not attend the convention but nonetheless received his party’s nomination to run for a second term. He lost the fall election, though, to Democrat Grover Cleveland.

The author relied on the game descriptions appearing in the June 7, 1892, issues of the Washington Post, Washington Evening Star, and Cincinnati Enquirer.