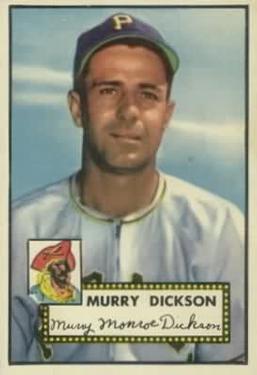 On paper the game appeared to be a mismatch between teams on different ends of the continuum of competiveness. The defending National League champion New York Giants, losers of seven of their last nine games, entered the game in second place with a record of 28-15, three games behind the first-place Brooklyn Dodgers and with every hope of returning to the World Series. The Giants were in need of a victory to right a floundering ship and stay within striking distance of their crosstown rivals. The last-place Pittsburgh Pirates were riding a three-game losing streak and entered the game with an 11-37 record, a distant 22½ games off the pace. For the Pirates, the game was an opportunity to dismiss the long hoodoo of their great nemesis, Sal “The Barber” Maglie, who was riding a personal 13-game winning streak against the Bucs that dated to September 16, 1945.1

The pitching matchup pitted a pair of 1951 20-game winners against each other. The Giants started Maglie, a right-hander who entered the game with a 9-1 record and 1.46 ERA, while the Bucs turned to veteran right-hander Murry Dickson, who was 2-8 with a 4.77 ERA. Maglie, who was 50-11 since his 1950 return from a four-year stint in the Mexican League, finished 23-6 for the Giants in 1951.2 Although he was off to a slow start to the 1952 season, Dickson was considered the ace of the Pirates rotation. Coming off a 20-win season himself, Dickson posted a 20-16 record in 1951 for a Pirates club that won only 64 games and finished in seventh place.3 In addition to his being the Pirates most reliable hurler, Dickson entered the game with a team-leading.370 batting average.

The Friday night game drew a crowd of 20,163, well above the 8,917 fans the Pirates averaged at Forbes Field that season.4 The game was played under partly cloudy skies with a game-time temperature of 83 degrees, slightly above average for an early June evening in Pittsburgh.

Dickson had an uneventful first inning, yielding a harmless two-out single to Giants third baseman Bobby Thomson. Maglie, coming off his first defeat of the season, four days earlier, also got out of the first unscathed. He gave up back-to-back one-out singles to rookie Bobby Del Greco and George Metkovich before striking out Ralph Kiner and retiring Joe Garagiola on a groundball to end the inning.

Don Mueller singled to lead off the top of the second and advanced to second when Al Dark grounded out to third. One out later, Chuck Diering drew a walk, giving Maglie an opportunity to help his own cause. However, the Giants hurler grounded out to shortstop to end the threat.

The Pirates opened the scoring in the bottom of the second. Rookie Jack Merson drew a leadoff walk. Following a strikeout by George Strickland, left-handed-swinging rookie first baseman Tony Bartirome sliced a short double down the left-field line, advancing Merson to third.5 Just as Maglie had done in the top of the inning, Dickson also failed to help himself when he popped out to first. Pete Castiglione then followed with a single to center that plated both Merson and Bartirome. Castiglione hustled around first to second when he saw Diering attempt to throw Bartirome out at the plate. Giants first baseman Whitey Lockman alertly cut off the throw and tried to catch Castiglione advancing to second. However, Lockman’s relay throw to second sailed into right-center and Castiglione came around to score.6 A three-run Little League home run!

The Giants answered in the top of third when Thomson sent a two-out home run into the gardens, formerly known as Greenberg Gardens, in left-center.7 Thomson’s seventh home run of the season was the only offense the Giants produced off Dickson that night.

Maglie responded with a shutdown inning in the bottom of the third to keep the score at 3-1. Dickson was equally as effective in the top of the fourth when he struck out the side after giving up a leadoff infield single to Mueller.

Maglie, who was scheduled to lead off the top of the fifth, was lifted infavor of pinch-hitter Bill Rigney. It was the shortest outing of the season to date for “The Barber.” In four innings of work, Maglie gave up six hits, five runs (three earned), and three walks, while striking out three. Meanwhile, Dickson retired the Giants in order for his first 1-2-3 inning of the game.

George Spencer replaced Maglie on the mound for the Giants in the bottom of the fifth. After yielding a leadoff single to Metkovich, the right-handed Spencer retired the next three Pirates to end the inning.

Dickson successfully navigated his way through the heart of the Giants order in the top of the sixth. Following a leadoff walk to Thomson and a one-out single by Mueller, the crafty right-hander retired the next two Giants to keep the score at 5-1.

Spencer was less fortunate in the bottom of the sixth. Strickland started the inning with a walk and advanced to second when Giants catcher Wes Westrum failed to pick up Bartirome’s attempted sacrifice bunt for an error. Two batters later, Castiglione bounced a one-out single off Spencer’s shin that rolled into short right field and plated Strickland with the Pirates’ sixth run of the game.9

Dickson escaped potential trouble in the seventh inning after giving up a two-out triple to Davey Williams and a walk to Lockman. With runners on first and third, Dickson retired Thomson on a foul popup that Garagiola easily handled.

Right-hander Hoyt Wilhelm was summoned to pitch for the Giants in the bottom of the seventh. The future Hall of Famer and his Giants teammates were caught off guard when Kiner, the reigning six-time National League home-run leader, laid down a bunt on the third-base line that brought a roar from the crowd. Kiner said it was the only bunt he could remember resulting in a base hit.10 The Pirates left fielder advanced to second on a passed ball and moved up to third when Merson singled to left. The light-hitting Bartirome, who was batting.191 coming in and had been inserted at first base because Gus Bell was too ill to play (Metkovich was switched from first base to right field),11 collected his second double (and third hit) of the game, plating Kiner and Merson for the final margin of victory, 8-1.

Dickson retired the Giants in order in the top of the eighth and Wilhelm followed suit with a 1-2-3 inning of his own in bottom of the frame. Dickson started the top of the ninth by striking out Westrum and pinch-hitter and former Pirate Bill Howerton before giving up a two-out single to Bob Elliot. Dickson finished the complete-game victory by getting Williams to ground out to short, forcing Elliot at second. In all, Dickson scattered seven hits, walked three, and struck out six while yielding a single run to the Giants.

Dickson’s ability to pitch out of trouble, Bartirome’s and Castiglione’s contributions at the plate and sloppy defense on the part of the Giants were the stories of the day for Dickson and the Pirates, who finally beat Sal Maglie after seven long years.12

After starting the season 9-0 with a 1.12 ERA, Maglie was 9-8 with a 3.98 ERA from the beginning of June on. He finished the season with a record of 18-8 and a 2.92 ERA as the Giants failed to replicate their magic of a year earlier. The team finished the season at 92-62, 4½ games behind the National League champion Dodgers.

Dickson, on the other hand, bounced back from his slow start to re-establish himself as the Pirates ace. From June 6 on he went 12-13 with a 3.15 ERA and finished the season with a record of 14-21 and ERA of 3.57. His 14 victories were double the number of victories of any other Pirates starter and his ERA was more than one run less than the team’s collective ERA. Amazingly, Dickson accounted for 33 percent of the total number of victories for a Pirates team that finished a dismal 42-112, 54½ games behind Brooklyn. The turnaround for Dickson was the night he and the Bucs shaved “The Barber.”

1 Preacher Roe pitched a complete game as the Pirates beat Sal Maglie and the Giants, 3-2.

7 The fences in left field were shortened by the Pirates for Hank Greenberg when he joined the Pirates in 1947 and the space beyond the left-field wall became known as Greenberg Gardens.