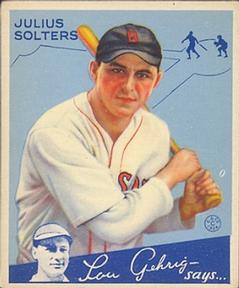 As the Boston Red Sox came to the plate in the top of ninth inning at League Park on June 8, 1937, first place was within sight for the Indians.

Since the team’s World Series win in 1920, the Indians had been largely mediocre, but there was cause for optimism in 1937. The pitching staff was guided by the steady hand of veteran Mel Harder, and Bob Feller, though still a teen, had developed veteran poise to go with his fastball. Talented but mercurial pitcher Johnny Allen, who faced the Red Sox in this game, was on the mend from an attack of appendicitis early in the season, and was starting to round back into form.1

In eight innings, Allen had scattered nine hits and led, 8-2. He had been staked to an early lead thanks to Earl Averill’s home run in the bottom of the first. A four-run fusillade in the sixth gave Allen even more insurance. The scoreboard showed that the Yankees had lost to the White Sox – the 10th straight win for Chicago – and a win would put the Indians a game ahead of both teams in the loss column. “That glittering gold top rung of the American League ladder,” as the next day’s Plain Dealer put it, awaited.2

To start the ninth inning, Allen walked rookie Bobby Doerr, pinch-hitting for pitcher Jack Wilson. He then surrendered three successive singles, to Buster Mills, Mel Almada, and Joe Cronin, Almada’s and Cronin’s hits each driving in a run. After Cronin’s hit, Indians manager Steve O’Neill lifted Allen for relief pitcher Joe Heving. The Indians were still leading 8-4, but Heving had his work cut out for him, facing the always dangerous Jimmie Foxx with Almada at second, Cronin at first, and nobody out. But Indians fans cheered Heving, believing the win was still within reach.3

Foxx launched a fly ball to left field that should have been easy pickings for Moose Solters.4 But Solters, according to the Cleveland Press, let the ball fall without molestation. “Maybe Judge Landis should investigate this,” the Press intoned, noting that Solters had previously played for the Red Sox.5 Both Cronin and Almada came home to score, cutting the Indians’ lead to two runs, at 8-6.

Up stepped Eric McNair for the Red Sox, hitless in the game. He too hit a fly ball to left field, giving Solters a chance to redeem himself. Instead, Solters staged a “Statue of Liberty” play – and not the football type. He stood motionless as the ball dropped behind him for another double, with Foxx taking third.

Pinky Higgins then singled, scoring Foxx and sending McNair to third. It was now 8-7, with the tying run 90 feet from home – and there were still no outs! O’Neill made another pitching change, this time bringing in Whitlow Wyatt to face Fabian Gaffke. Gaffke put a charge into one, sending it to left-center field – the deepest part of League Park for a double that scored Higgins and McNair as the Red Sox took their first lead of the game.

Gene Desautels dropped a sacrifice bunt to advance Gaffke to third, and the pitcher’s spot came up next. The Red Sox had batted around, but Doerr was lifted for pitcher Wes Ferrell, who was as much a threat at the plate as he was on the mound. Ferrell flied out to right field, but Gaffke tagged up and scored. Mills grounded out to shortstop Lyn Lary to end the inning, but the damage had been done.

The 2,500 fans in attendance, stunned to silence by the Red Sox’ rally, regained their voices in the bottom of the ninth as the Indians went meekly in order to Red Sox pitcher Johnny Marcum. Hal Trosky lined out to right field. Solters, who had become the game’s goat, was booed heartily as he fouled out to catcher Desautels for the second out, and Odell Hale ended the game with a fly ball to center field.

“It was the rally of rallies for the year, and when it all was over, the Boston dressing room was a mad house,” said the Boston Globe.

Things were just as mad at the Plain Dealer offices, as “scores of fans phoned … with denunciations of the Tribe’s play.”6 But O’Neill planned to keep Solters in the lineup, saying, “You can’t take a man out of the line-up just because he looked bad on two fly balls. He deserves some consideration and I am going to see that he gets it. The morals of many players have been ruined by taking them out after they have been guilty of fielding lapses and I do not think that Solters deserves such treatment.”7

Solters ended up playing 149 games for the Indians that year – all of them in left field.