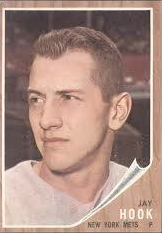 On June 6, 1962, the Mets’ woes continued when they were swept by the Phillies in a doubleheader. The loss in the first game was painful; it was the first time they been shut out in 1962, their debut season. In the second game, Al Jackson pitched seven shutout innings before Tony Taylor homered to tie the game. That set the stage for the Phillies’ ninth inning rally, leaving the Mets with their 17th straight loss.

After the game, Jim McCulley of the New York Daily News wrote: “Casey Stengel was at a loss. Not for words, which could never happen, but for a solution to the problems that beset the Mets. ‘I can’t do anything about it until I get some new players. I’ve got to get a different team.’”1

The last time the Mets won a game was on May 20, when they swept the Milwaukee Braves in a doubleheader. They came from behind in the first game, scoring two runs in the eighth and four in the ninth, leading Dick Young of the New York Daily News to write that they were “come-from-behind demons”2 since it was the second game in as many days that the team had won after falling behind. But those victories were now a distant memory.

The Mets had a travel day before taking the field against the Cubs for their third doubleheader in less than a week. Chicago sent Glen Hobbie to the mound to start the first game. Hobbie struggled all season and entered the game with a 1-6 record. His lone win was a complete-game victory on May 28 over the Braves.

Hobbie looked as if he might be on his way to his second victory when he breezed through the first two innings. The Mets were put out in order as Hobbie notched a strikeout and got the rest of the Mets to ground out to his infielders.

Stengel sent Jay Hook to the mound in hopes that he might turn around his own fortunes as well as those of the team. On April 23 Hook had pitched a complete-game victory to end a Mets losing streak.

Hook got through the first inning unscathed but the Cubs struck first when they brought a runner across the plate in the second. Ernie Banks and George Altman led off with singles. After Hook struck out Lou Brock, El Tappe sent a weak groundball to the second baseman that brought home Banks, giving the Cubs a 1-0 lead.

The Mets jumped on Hobbie in the third. Jim Hickman hit a one-out double and came home when the next batter, Hook, singled up the middle. Hobbie walked Richie Ashburn, and Elio Chacon singled down the left-field line to score Hook and put the Mets in the lead, 2-1.

In the fourth Felix Mantilla and Sammy Taylor singled and a sacrifice fly by Hickman brought home another run.

Hook kept the Cubs at bay for the next four innings. Although Chicago got runners in scoring position twice, Hook dodged trouble both times. But the Cubs broke through in the seventh. With two outs, Hobbie singled and Ron Santo homered into the left-field bleachers, tying the game, 3-3.

Neither team scored in the eighth. In the Mets ninth, Hickman led off with a single. Hook bunted; Hobbie tried to get Hickman at second but he was safe. Don Elston relieved Hobbie. His first batter, Ashburn, bunted down the first-base line. Banks couldn’t field the ball and the bases were loaded. Elston fanned Chacon but Charlie Neal’s sacrifice fly scored Hickman for a 4-3 lead.

Hook told Stengel he was tiring in the seventh and eighth as he noticed that some of his pitches were sailing higher in the strike zone. After Stengel watched him warm up in the ninth, he turned to his bullpen and sent in Craig Anderson.

“But the Mets still had to sweat, especially Stengel,” wrote Dick Young. “The Old Man is a bold one. He stuck his neck out bravely.”3 Anderson eventually got the job done although it wasn’t before the Cubs gave New York a scare. After Anderson got the first two outs on just two pitches, André Rodgers and Jim McKnight hit singles.

The 6,483 fans in attendance suddenly had a glimmer of hope as Santo came to bat. Anderson fell behind 3-and-1 and it looked as if the Mets might lose another game and extend their misery. But Anderson sealed the victory when he got Santo to hit a “one-hop comeback shot, and tossed to first for the nerve frazzling final out.”4

The Mets had finally won. Their victory snapped the longest losing streak in New York baseball. The 1944 Brooklyn Dodgers had held the record for losses, 16 games.

With one victory under their belt, the Mets took the field again to see if they could repeat. Rookie Cal Koonce started for the Cubs in the second game. Koonce was coming off a solid performance against the Reds on June 3, when he earned his third victory of the season.

He struggled in the first inning as the Mets jumped on him for a run on Chacon’s one-out single, a stolen base, and Neal’s line drive down the right-field line.

Stengel sent the struggling Bob Miller to the mound. Miller began the season as a starter but Stengel had moved him to the bullpen in May. When that didn’t prove any more successful, Miller was returned to the starting rotation. As he took the mound agains the Cubs, he was still looking for his first win.

Miller kept the Cubs hitless through the first two innings. Cuño Barragan singled in the third, but Miller got a strikeout and a double play to end the inning.

The Cubs tied the game in the fourth. Miller walked Billy Williams with one out. A fielder’s choice moved him to second and he scored Altman’s single up the middle. (Altman, who had sat out the day before with a sore elbow, showed no evidence of that soreness: He collected five hits in the doubleheader.) The single was Miller’s one mistake until the seventh inning.

Miller and Koonce battled it out as the afternoon wore on. Neither pitcher allowed a hit for the next two innings. The Mets had a chance to add a run in the seventh when Koonce walked Chacon and Neal singled him to third. But Frank Thomas’s groundout ended the opportunity.

Miller was unable to continue his dominance over the Cubs in the bottom of the seventh. Dick Young wrote, “The game was lost when Miller went into another one of his seventh inning folds.”5

This brought Santo to the plate. After his home run in the first game, his bat had been silenced so far in the second game. He finally connected and his line single to left brought home two Cubs, making the score 3-1.

Racing the encroaching darkness, the Mets were able to get a run back in the eighth. Bob Anderson replaced Landrum on the mound and walked Marv Throneberry and Mantilla. Manager Charlie Metro replaced him with Elston while Stengel sent in Joe Christopher to run for the slow-footed Throneberry. Hickman’s sacrifice moved up the runners.

Stengel sent left-handed-hitting Sammy Taylor up to hit against the right-handed Elston. Taylor hit a groundball in the hole at second but Hubbs made an excellent fielding play and only Christopher could cross the plate.

Now Stengel made an unusual move. He sent Hook up to bat for pitcher Miller. Young commented of the move, “It’s a ‘thing’ with [Stengel]. He has it in his head that Hook, who swings lefty, is a hitter. So he uses him with hitters such as [Cliff] Cook, [Gil] Hodges, and [Rod] Kanehl on the bench. It boils down to this: Would you prefer to have a professional hitter swing for you right-handed than a lefty who is ‘a pretty good hitter as a pitcher.’”6

Hook struck out, ending the inning. Stengel had sent Hook to the plate on May 22, when New York also had a chance for a victory, telling reporters that he had confidence in Hook’s hitting. Hook struck out that time, too.

With darkness making it hard to play, the umpires decided to go ahead with the game.7 Ken MacKenzie was now pitching for the Mets. He got Williams to line out to second. Banks struck out, which probably surprised none of the fans since many of them could barely see the pitches themselves. With Altman batting and the count 2-and-2, the umpires finally called the game. The Cubs were winners. Richard Dozier of the Chicago Tribune wrote that Altman “may as well have stood blindfolded” since it was so dark.8

Although the Mets didn’t break the major-league record of 23 consecutive losses set by the Philadelphia Phillies the year before, their defeat in the second game left many wondering if it was only a matter of time until they broke the record.

In addition to the sources cited in the Notes, I also used the Baseball-Reference.com, and Retrosheet.org websites for box-score, player, team, and season pages, pitching and batting game logs, and other material pertinent to this account.

7 Wrigley Field had no lights at that time.