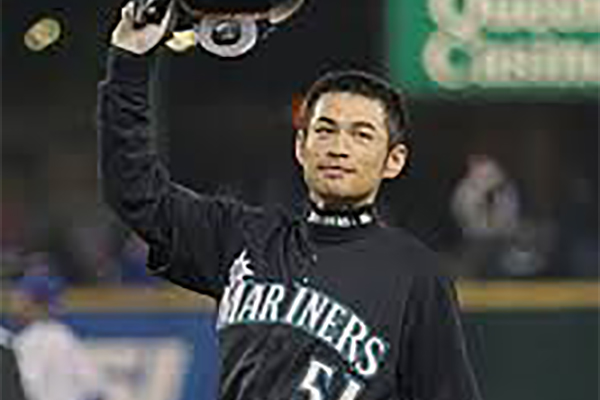 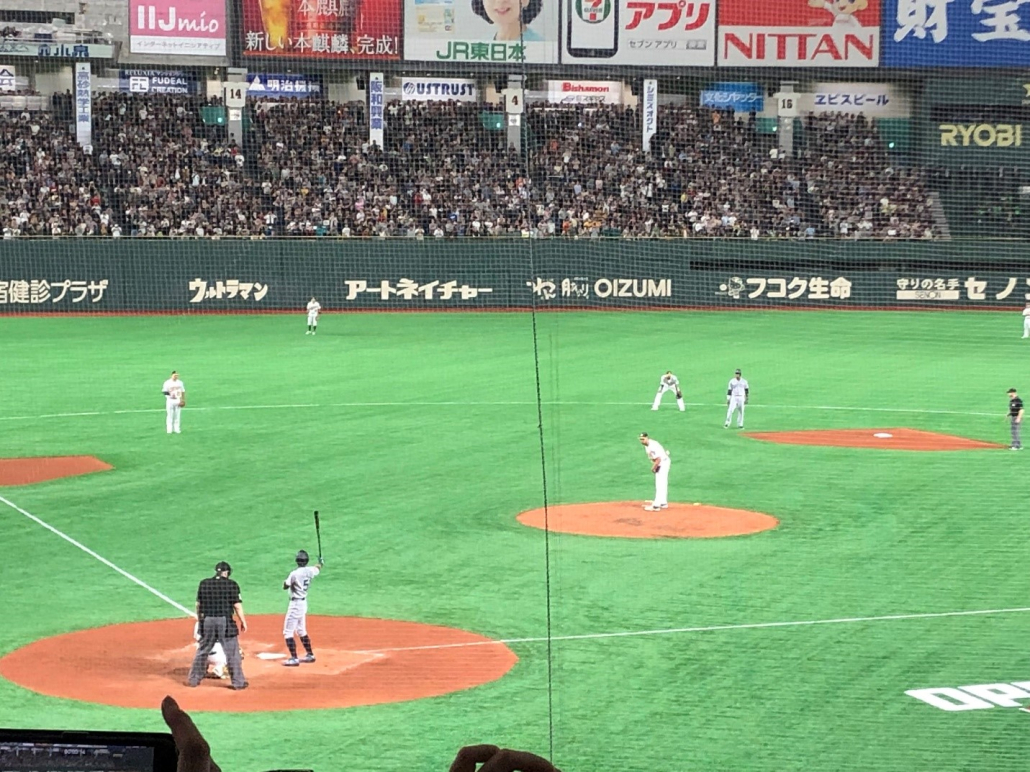 The final at-bat of Ichiro Suzuki’s career, against Lou Trevino of the Oakland Athletics, on March 21, 2019 at the Tokyo Dome. (Photo: Shane Barclay)

At the end of the 2017 season, shortly before his 44th birthday, Ichiro Suzuki claimed he intended to play until he was “at least 50” years old.1

But his once-potent bat and gazelle-like legs were no longer creating the magic fans witnessed when they first laid eyes on the wonder that was Ichiro in his prime. After nine seasons in Nippon Professional Baseball, then 17 in America, he was no longer a spry, athletic marvel. The sideburns that had always jutted below his cap were now mostly white, and he had been relegated to pinch-hitting duties by 2017. (Still, his 26 pinch hits nearly matched John Vander Wal’s 1995 major-league record of 28 pinch hits in a season.)

Ichiro remained unsigned throughout most of the 2017-18 offseason, inking for his second tour with the Mariners only after three of their top four outfielders went down with injuries during spring training.2

After 47 forgettable plate appearances in 2018, the final one on May 2, the Mariners moved Ichiro to a unique front-office role in which he continued to train with the team and maintain his legendary meticulous physical regimen.

The reason? Major League Baseball had just announced that the Mariners would open the 2019 season in Japan with a two-game series against the Oakland A’s. Seattle general manager Jerry DiPoto said, “There’s a strong likelihood that you will see Ichiro next year suit up, particularly in Tokyo. It’s a great opportunity for the Mariners, for Major League Baseball, and for [NPB].”3

It was almost certain that Ichiro would play, but would the Tokyo trip serve as his retirement ceremony?

When the new year began, the people of Japan already knew 2019 would be a year of transition. In an unprecedented move, Japan’s 85-year-old Emperor Akihito decided to abdicate due to declining health.4 The royal leader of Japan would step down soon; would he be joined in retirement by a baseball prince?

The teams arrived at Tokyo’s Narita Airport on March 15 with hordes of media and fans waiting for them, treating even unknown players like rock stars.5 Ichiro said upon arrival, “This is a great gift for me. I will treasure every moment here on the field. One week after this event, I will be reflecting back on these days, so I will make sure I remember every moment here in Japan.”6

By the start of the final game of the Opening Series at Tokyo Dome on March 21, Ichiro hadn’t yet announced his retirement, but it seemed inevitable. He performed feebly in spring training, and his minimal role in the season opener a day earlier—Ichiro batted last in the lineup and manager Scott Servais removed him after two unimpressive at-bats—was telling. The crowd of 46,451—which included Masanori Murakami, the first Japanese major-league player (with the San Francisco Giants in 1964)—arrived early and savored every chance they had to catch perhaps a final glimpse of Ichiro.

Taking the hill for the Mariners in his major-league debut was Yusei Kikuchi. The 27-year-old lefty had pitched for NPB’s Saitama Seibu Lions before the Mariners signed him to a four-year contract after the 2018 season. Kikuchi retired the A’s in order in the first inning, recording his first major-league baseball strikeout. The proud home crowd gave him warm applause as he returned to the dugout.

As Ichiro first came to bat in the second, immediately following Ryon Healy’s two-run homer off Oakland starter Marco Estrada, tens of thousands of fans simultaneously raised their cell-phone cameras. He offered at Estrada’s 2-and-1 pitch and popped out in foul territory.

Ichiro’s next at-bat came in the fourth. The Mariners had expanded their lead to 3-0 on Mitch Haniger’s third-inning home run. By this point, word had spread around the ballpark that it was official: Ichiro would announce his retirement after the game.7 The fans pleaded for just one more hit. Estrada, however, retired Ichiro on an innocent groundball to second base.

Kikuchi had blanked the A’s on two hits through four innings, but Oakland rallied for two runs in the fifth. Marcus Semien singled Matt Olson home to get the A’s on the scoreboard, and Oakland cut the deficit to 3-2 when Jurickson Profar scored on Jay Bruce’s error at first base.

When Ichiro stepped to the plate in the top of the seventh, with Healy on second after a leadoff double, it was possibly his final at-bat. The tone of the fans’ cries seemed to be a mix of appreciation and desperation as they pleaded for a hit.

He fell into a two-strike hole against reliever Joakim Soria but worked the count to 2-and-2. Soria’s fifth offering was a changeup that Ichiro thought would be high. But it sank into catcher Josh Phegley’s glove, and the umpire signaled a third strike.

The fans collectively sighed a quick groan but then burst into applause—their love was not conditional. Ichiro cast his eyes down to the deep green field turf as he walked back to the dugout, his blank expression revealing a hint of sadness.

Later in the inning, Healy scored on Bruce’s sacrifice fly. Oakland then tied the game, 4-4, in the bottom of the seventh, when Khris Davis drove in two runs with a single against reliever Dan Altavilla.

At this point, the game’s tension was focused solely on Ichiro’s next plate appearance. His final chance came in the top of the eighth, against reliever Lou Trivino.

The fans stood and showered Ichiro with cheers as he approached the plate. Ichiro did precisely what he had done in nearly 15,000 previous professional at-bats: he took a looping practice swing outside of the batter’s box, stepped toward the plate, dropped in and out of an impressively low crouch to stretch his legs, entered the box, smoothed out the dirt with his left foot, and struck that iconic pose—right arm extended toward center field, bat pointed toward the dimpled Tokyo Dome roof, left forearm angled toward his right shoulder, and both eyes square to the pitcher.

Trivino came set, and Ichiro hiked his right sleeve up with his left hand and circled his black Mizuno bat down and back into a gentle, two-handed grip. With both knees slightly bent and pointing toward each other, he awaited the pitch.

Ichiro again fell behind but fouled off two tough 1-and-2 pitches. Trivino’s sixth pitch was a sinking, thigh-high fastball on the outer half. It was a pitch that a younger Ichiro likely would have deposited into the outfield for a base hit, but 45-year-old Ichiro pounded it into the ground toward second base.

Semien charged from short, fielded the ball, and double-pumped before throwing to first. Ten years earlier, Ichiro would have been well past the bag when the ball arrived, but here, in Tokyo in 2019, he was out by a half-step.

He slowed to a walk upon reaching the infield, continuing to gesture toward the crowd in gratitude. Ichiro exchanged hugs and handshakes with everyone in a Mariners uniform, and emerged from the dugout for a curtain call.

There were more cheers from the crowd, and more grateful acknowledgments from Ichiro. Dee Gordon, his friend and teammate, and Kikuchi cried. Ichiro descended into the dugout, where he was bear-hugged by Ken Griffey Jr., his fellow Mariners’ legend, teammate for two seasons, and one of the few who knew what it felt like to go from being one of the best in the world to no longer being able to compete at the highest level.

Ichiro grabbed his bat, helmet, and glove and descended into the Mariners clubhouse.

The 12-inning game lasted 4 hours and 27 minutes, with the Mariners pushing across the winning run when the A’s failed to turn a double play on a bases-loaded grounder, but the fans were in no rush to go home. They wanted one more chance to say goodbye to Ichiro. They chanted “I-chi-ro!” and clapped their hands, demanding an encore as if at a concert. Stadium employees eventually turned off the main lights of the Tokyo Dome, but the fans still wouldn’t dissipate. Finally, after more than 30 minutes, their hero emerged.

The crowd erupted, and Ichiro repeatedly gestured in appreciation. He completed a full lap around the field, hands waving and face full of gratitude. He trotted toward second base and stood in the middle of the diamond, all by himself, soaking it in and applauding the crowd.

The ballplayer appeared as grateful for the fans as they were for him. He removed his cap, extended his arm, and spun 360 degrees, tipping his cap to all corners of the ballpark. Ichiro walked in reverse toward the dugout, hands raised, then skipped in a sideways motion off the field with a lightness that he hadn’t shown all week.

I attended this game as a guide for my international baseball tour company, JapanBall. Our group of 26 American baseball fans unanimously felt that it was among the most memorable sporting event we had ever attended. The love exchanged between Ichiro and his hometown fans was extraordinary and palpable, and we felt privileged to bear witness to this special homecoming. Descriptions of the crowd in this article are based on my distinct memories of the game.

In addition to the sources cited in the Notes below, the author consulted Baseball-Reference.com and Retrosheet.org for pertienent information, including the box score and play-by play. He also reviewed MLB videos of Ichiro’s last at-bat and exit from the game, and from the Seattle Mariners of the postgame curtain call.

6 Stephen Wade for Associated Press, “Ichiro in Japan: Still Enjoying the Big Leagues While He Can,” Seattle Times,  https://www.seattletimes.com/sports/ichiro-in-japan-still-enjoying-the-big-leagues-while-he-can/, March 16, 2019.