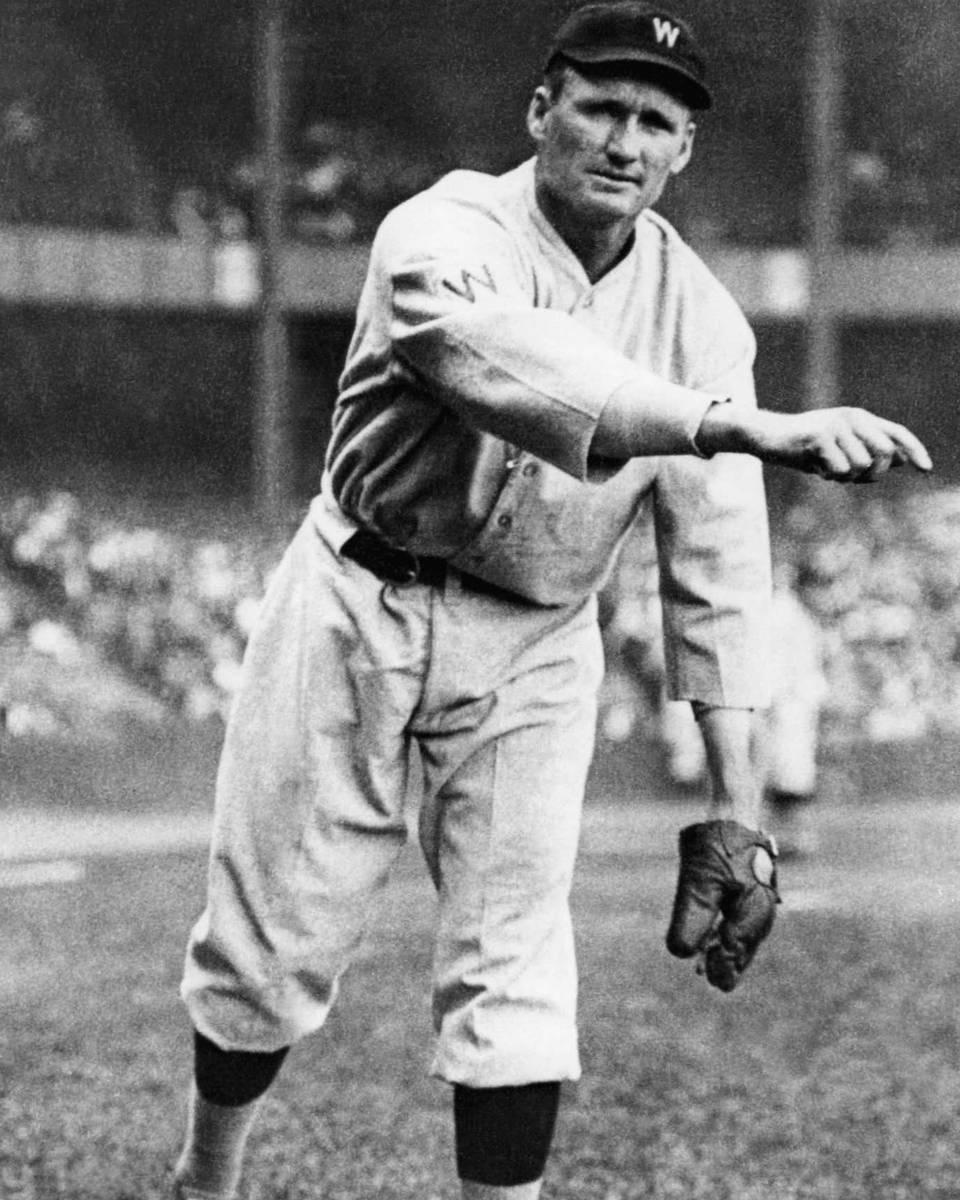 The Yankees were expecting a huge crowd at the Polo Grounds on May 11, 1919, for the first American League game to be played on a Sunday in New York. After all, the Giants had played to a full house in the same ballpark the week before for the first Sunday game for either league in the city.

Yet after two days of rain and the postponement of the May 9 game between the Washington Senators and the Yankees, the weather had not cleared. The sun had been out and the temperature was seasonable for the Giants the previous Sunday, but on the 11th rain still threatened and a damp chill was in the air.

Washington’s record coming into the game was 6-6. New York was at 6-4. This shortened post-World-War season didn’t begin until late April and was scheduled for 140 games.

A final decision to play the game on the soggy field wasn’t made until after 1:30 P.M. The few thousand fans who “dragged their furs out of mothballs,” according to the New York Tribune, were surely disappointed by the home team’s performance.1 “Those who did journey to the Harlem ballyard sat and shivered through the game,” the New York Times reported.2

The 3,000 or so of “New York’s most rabid fans” who showed up were “attracted by the report that the ‘one and only’ Walter Johnson would pitch,”3 the Washington Post wrote. The day’s gloom seemed to work in Johnson’s favor. “The absence of the sun’s rays made a condition which was ideal for the big Washington twirler’s speed,” the unbylined story in the New York Times concluded.4

The new Sunday ordinance allowed a game to start as early as 2 P.M., but this one, scheduled to start at 3, got going about 25 minutes late. A military band played the National Anthem and Major G.H. Gifford of the Army’s 11th Engineers threw out the ceremonial first pitch.5

After Yankees starter Jack Quinn retired the first three Nationals in order, Johnson yielded a one-out single to left in the bottom of the first to Roger Peckinpaugh, the Yankees shortstop, who stole second. From then on, Johnson stopped the Yankees cold. Quinn wasn’t as sharp, but he too kept the Senators scoreless. He worked out of three bases-loaded jams, likely helped by the absence of the Nationals’ regular center fielder, Clyde Milan, who was ill.

Washington first threatened in the second inning. Sam Rice led off with a single. Harry Thompson’s bunt was fumbled by Quinn, putting runners on first and second with nobody out. But Quinn struck out Mike Menosky and Hal Janvrin, then got Sam Agnew to ground to shortstop for a force out at second.

With one out in the fourth, Peckinpaugh booted a grounder by Rice. Thompson singled Rice to third and took second on the throw to third. Rice tried to score on Menosky’s grounder to shortstop, but Peckinpaugh threw Rice out at the plate. After Menosky stole second, a walk loaded the bases for Washington catcher Agnew, who ended the threat by grounding back to Quinn.

The Senators threatened again in the sixth. Shortstop Howie Shanks led off with a single. Attempting to sacrifice, Rice was safe at first when Wally Pipp couldn’t handle the throw. Thompson successfully sacrificed the runners to second and third. Quinn walked Menosky to load the bases, but Janvrin’s grounder allowed Peckinpaugh to throw out Shanks at the plate. With a third chance to be the hero, Agnew struck out.

Rice singled with one out in the eighth, but was thrown out trying to steal. Thompson singled. Menosky’s single sent Thompson to third. Menosky stole second. Quinn walked Janvrin. Nationals manager Clark Griffith sent Patsy Gharrity, who was hitting over .300, up to bat for Agnew. Gharrity lined out to Peckinpaugh, ending Washington’s best shot at scoring. Quinn retired Washington in order in the ninth.

Johnson, meanwhile, kept setting down New York one-two-three. By the end of the ninth, he had yielded just the first-inning single and had retired 26 consecutive batters. But the game was headed to overtime. Quinn allowed a single and a walk in the 10th but got out of it.

Johnson struck out Peckinpaugh leading off the bottom of the 10th, the 27th consecutive Yankee retired. Pipp flied out to make it 28 in a row. Johnson walked Home Run Baker to break the spell, but Baker was thrown out stealing.

The Yankees picked up their second hit off Johnson when Del Pratt singled to center in the 11th. But he was forced at second by Duffy Lewis, who was thrown out stealing. The Big Train ended up facing one batter over the minimum in his 12 innings of work.

The Senators lost another chance in the 12th when Rice was picked off first after singling with two outs. Despite three hits, the Nats’ future Hall of Fame outfielder had a tough day on the bases. He was thrown out at the plate when he tried to score from third in the fourth inning and cost Washington a run when he was thrown out stealing in the sixth.

After Yankees outfielder George Halas (of future football fame) grounded out in the bottom of the 12th, home-plate umpire Bill Dineen gestured for Griffith and Miller Huggins, the Yankees’ skipper, to come out for a discussion. The time was approaching 6 P.M. Dineen explained to the managers that Jacob Ruppert, the Yankees’ president, had told him before the game that there was a 6 P.M. curfew.6

In fact, Ruppert was mistaken. The new city law set no specific time that a Sunday game had to end. Despite the day’s gloom, the sunlight was as bright as 6 P.M. approached as it had been when the game began.7

Griffith a veteran of Washington ways, offered a suggestion to allow play to continue: Somebody should go out and turn back the hands on the stadium clock. “He informed Umpire Dineen that it was customary to turn back the clock in both the Senate and the House of Representatives when time interferes with legislation.”8

“They get away with a lot of things in Washington these days,” Dineen reportedly replied. “But there is a difference between baseball and statesmanship. Baseball is on the up and up.”9

Griffith relented. So the game erroneously was ended and deemed a tie, with the shorthand explanation for posterity that it was because of darkness.

Although Johnson did not get a victory, the game counts as one of his record 110 career shutouts. Quinn kept the Senators from scoring even though Washington had 17 baserunners on 10 hits, four walks and three errors. Because the Yankees turned two double plays, threw a runner out stealing, and picked off another, Washington left “just” 13 men on base to New York’s one.

“Quinn pitched a game for the Yankees that would have won 19 of 20 decisions,” the Washington Post reported, giving the veteran spitballer his due.10 Quinn was one of 17 pitchers who relied on spitballs and who were allowed to keep throwing them when the pitch was banned for the 1920 season.

“Johnson never pitched a better game,” H.C. Hamilton of the United Press wire service wrote. “The record speaks volumes for the craftiness of the mighty Walter.”11

Little did the game’s participants know that a similar fate was in store the next day. The Monday game in fact did have to be called because of darkness after 15 innings with the score tied, 4-4. After four days in New York, the Senators headed to Cleveland and the Yankees to Detroit without a win or loss.

Career and season statistics from Baseball-Reference.com and Retrosheet.org, as are the game files: