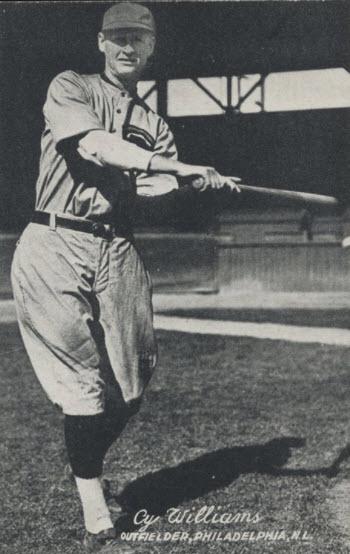 The Philadelphia Phillies hosted the St. Louis Cardinals at Baker Bowl on Friday, May 11, 1923. It was the final game of a four-game series; the Cardinals won the first three games.

The most striking feature of Baker Bowl was its immense right-field wall, measuring 40 feet tall and standing only 273 feet down the line from home plate. It was three feet taller than the later built Green Monster at Boston’s Fenway Park and 37 feet closer to home plate. The massive tin barrier was a favorite target of National League hitters. The Phillies’ Cy Williams, a left-handed pull hitter, led the major leagues with nine home runs through games of May 10, 1923, including seven in 13 games at Baker Bowl.

On May 11, the Cardinals were without their best hitter, Rogers Hornsby, who tweaked his knee while running the bases in the first game of the series.1 Filling in for him at second base was 24-year-old George Toporcer, nicknamed “Specs” for the eyeglasses he wore on the field. Cardinals manager Branch Rickey put three more youngsters in the starting lineup: 23-year-old Jim Bottomley at first base; 23-year-old Eddie Dyer in left field; and 20-year-old Howard Freigau at shortstop. The Cardinals wore their gray road uniforms, which featured a pair of redbirds perched upon a black bat.2 Manager Rickey sat on the bench in a “conservative business suit.”3

The Phillies were attired in their pinstriped white home uniforms, emblazoned with a large red “P” on the jersey. First-year manager Art Fletcher had modest expectations for his club. “While most of the experts are picking my team to finish last this year [in the eight-team National League], I am shooting for sixth place,” he said.4 Fletcher would be “a miracle man if he gets anywhere with the Phils,” wrote Herman Wecke of the St. Louis Post-Dispatch.5 The team had lost seven games in a row and was in the cellar with a 6-14 record through games of May 10.

Jesse Haines was selected as the starting pitcher for the Cardinals. A 29-year-old right-hander, Haines had a 4-1 record and a sparkling 1.84 ERA through May 10. Opposing him was the Phillies’ Pete Behan, a 35-year-old right-hander, making his first start of the season. Behan compiled a 21-4 record in 1922 for the Hamilton (Ontario) Tigers of the Class B Michigan-Ontario League. He “knows how to pitch,” said the Philadelphia Inquirer, and “is cool, crafty and calm under stress.”6

It was a pleasant spring day with the temperature in the mid-60s. Attendance at Baker Bowl averaged about 3,000 per game in 1922, but on May 11, 1923, the turnout was sparse, with only 1,000 fans on hand. The umpires were Bill Klem behind home plate and Bob Hart on the bases.

Jack Smith, the Cardinals’ leadoff man, scored a run in the top of the first inning in “old school” fashion: He singled, stole second base, advanced to third on a wild pitch, and came home on an infield out. But soon, the heavy hitting would commence.

Milt Stock’s second-inning triple and Bottomley’s third-inning double gave the Cardinals an early 3-0 lead. In the bottom of the third, the Phillies’ Johnny Mokan blasted a three-run homer over the center-field wall; there was nothing cheap about it, as that wall stood 408 feet from home plate.7 Heinie Sand followed with a double to left-center field. Rickey then brought in southpaw Bill Sherdel to face the left-handed-hitting Cy Williams, and Williams promptly drove the ball over the big wall in right field. The ball landed in Broad Street and the Phillies had a 5-3 lead.

In the top of the fourth, Sherdel earned a measure of revenge when he himself smacked a two-run homer over the tin monster, and Dyer was credited with a solo home run when his drive to deep left field bounded into the bleachers.8 In the bottom of the fourth, Mokan clubbed another three-run homer, this one a towering shot into the left-center-field bleachers.

Sherdel wasn’t fooling anyone. In the bottom of the fifth, the Phillies’ Frank Parkinson clouted a two-run homer into the center-field bleachers. Rickey replaced Sherdel with Clyde Barfoot, a right-handed screwballer,9 but he fared no better, as the Phillies scored two more runs in the inning, on Behan’s bloop single and Mokan’s double off the scoreboard in center field. Mokan was having quite a day at the plate, and after five innings, the Phillies led 12-6.

Max Flack, pinch-hitting for Barfoot, led off the top of the sixth with a double to the scoreboard and came home on Smith’s single to center field. Fletcher then brought in Lefty Weinert to face the left-handed-hitting Dyer. Rickey countered by sending in a right-handed pinch-hitter, Les Mann, who belted the first pitch from Weinert into the left-field bleachers for a two-run homer, which cut the Phillies’ lead to 12-9.

Johnny Stuart, a 22-year-old rookie from Ohio State University, took the mound for the Cardinals in the bottom of the sixth, but after he walked the first two batters, Rickey replaced him with Lou North, a veteran relief pitcher. Facing North, Parkinson drove in two more runs with a single to center field. The onslaught continued the next inning when Williams launched his second home run, a two-run shot over the right-field wall, and the Phillies added yet another run when the Cardinals’ Hi Myers misplayed a ball in center field. The Phillies now led 17-9.

But the Cardinals weren’t done. In the top of the eighth, Mann drilled his second home run of the game, a solo shot that landed in the left-center-field bleachers. The Cardinals then loaded the bases with three consecutive singles, and Fletcher replaced Weinert with Lee Meadows, a bespectacled right-hander. One run scored when Myers beat out an infield single, and another scored on an infield out, and the Philadelphia margin was reduced to 17-12.

Before the game, Rogers Hornsby had remarked that Cy Williams “is a dead right-field hitter and everybody in the baseball world knows it.”10 Every team in the league played him to pull the ball and employed a defensive shift in the infield. But with two men on in the bottom of the eighth, Williams lashed a ball into the left-field bleachers for his third home run of the game. According to the Philadelphia Inquirer, it was the first time Williams had homered to left at Baker Bowl.11 The milestone was significant also because it was the 10th home run of the game, which established a new major-league record. According to the St. Louis Star, the previous record was nine home runs in a game by Chicago and Cincinnati in 1895.

The Cardinals refused to quit. In the top of the ninth, doubles by Ray Blades and Jack Smith produced two more runs. When Meadows struck out Milt Stock for the final out, the battle was over. The final score was Phillies 20, Cardinals 14. Behan was the winning pitcher, despite allowing eight runs in five innings. Sherdel, who gave up seven runs in two innings, was the losing pitcher.

Williams and Mokan each collected seven RBIs that day, and Williams would go on to set a major-league record of 44 RBIs in the month of May, a record that still stood through 2017.12 He finished the 1923 season with 41 home runs and 114 RBIs, and his home-run total tied Babe Ruth for the major-league lead. Despite his fine season, the Phillies finished the year with the worst record in major-league baseball.

8 Until the rule was changed in the 1930s, a ball that landed in fair territory and bounced into the stands was a home run.