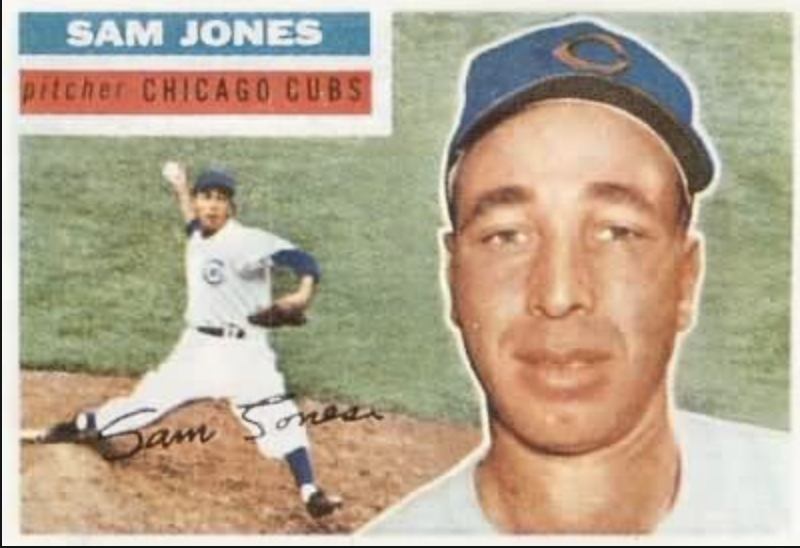 “There haven’t been many — if any — finer finishing touches put on a no-hit performance,” gushed sportswriter Jack Hernon after the Chicago Cubs’ Toothpick Sam Jones struck out the side with the bases loaded in the ninth inning to author a no-hitter against the Pittsburgh Pirates.1 Jones “put a bizarre finish to the greatest pitching feat in Wrigley Field since 1917,” declared Windy City scribe Edward Prell, evoking comparisons to a Deadball Era game when the Cubs’ Hippo Vaughn and the Cincinnati Reds’ Fred Toney held their opponents hitless through nine innings.2

In mid-May 1955, the Cubs were in the middle of the most inept period in franchise history, despite their fourth-place position and modest 13-14 record in the standings heading into the Thursday afternoon game with the Pirates. Already 10 games behind the streaking Brooklyn Dodgers, the Cubs were en route to their ninth consecutive nonwinning season and second-division finish, an inglorious double streak that would eventually reach 16 seasons. Manager Fred Haney’s Bucs, coming off three consecutive 100-loss and last-place finishes, had nowhere to go but up in 1955, yet still finished in the cellar, though they avoided the century mark in defeats (60-94).

Toeing the rubber for the North Siders was Sam Jones, whose moniker “Toothpick” derived from his penchant for chewing them and not from his 6-foot-4, 200-pound frame. The Cubs had acquired the 29-year-old right-hander from the Cleveland Indians in the offseason in a multiplayer deal for aging slugger Ralph Kiner. A former Negro League star with the Cleveland Buckeyes, Jones had a cup of coffee with the Tribe in 1951 and 1952. Plagued by shoulder bursitis the following campaign, the hard-throwing Jones revived his big-league prospects by going 15-8 and fanning 178 in 199 innings for the Indianapolis Indians, the regular-season champions of the Triple-A American Association. Jones (3-3, 5.08 ERA) was making his seventh start for the Cubs, and just the 12th in his career.

On an overcast day with temperatures in the low 70s, the smallest crowd of the season thus far (2,918) in Wrigley Field witnessed history. After Jones set down the first three Pirates hitters, the Cubs wasted no time taking their whacks at rookie Nellie King, the 6-foot-6, 185-pound stringbean hurler making his fourth career start. Following one-out singles by Gene Baker and Bob Speake, Ted Tappe belted a two-out double to drive in the first run, which proved more than enough offense.

The Cubs pounded the ball all afternoon, collecting 15 hits and drawing two walks. They tacked on another run in the second on a double by Eddie Miksis. Right-handed swingman Vern Law replaced King to start the third. He hurled the last six frames and surrendered two more runs. A one-out triple by Ernie Banks in the fifth plated Tappe for a 3-0 Cubs lead, and Tappe’s solo homer in the seventh rounded out the scoring, which should have been higher. The Cubs threatened seemingly every inning, yet managed only two hits in 17 at-bats with men in scoring position and left 13 men on base; six times a batter was stranded on third.

This game was not about the Cubs’ offense which scored fewer runs than any NL team in 1955 except the Pirates; rather, it was Jones’s statement to the baseball world that he belonged in the big leagues.

Toothpick Sam breezed through the first eight innings. He walked four, including Dale Long three times, and no Pirate reached second base. The Cubs played flawlessly in the field and the Chicago Tribune noted that there were no close plays or questionable calls by the umpires.3 Through five innings, the Pirates hit only one ball out of the infield even though Jones struggled to get his curveball over the plate. “I called mostly for fastballs, with a little slow [stuff] included,” said catcher Clyde McCullough.4 Jones found his bender in the sixth, retiring the side on outfield flies. The first out of the seventh was the trickiest of the game. Leadoff hitter Dick Groat hit a bounder through the box that Jones knocked down with his glove. Second baseman Gene Baker fielded the ball on the charge and tossed underhanded to first.5 Prell noted that two of the Pirates’ three hard-hit balls came in the eighth. Center fielder Eddie Miksis raced back “near the vines” to grab Gene Freese’s deep fly ball for the first out;6 and third baseman Randy Jackson snared Toby Atwell’s laser, then tossed to first to double off Long. It was second stellar defensive play for the two-time All-Star third sacker. In the fourth Jackson made a “one handed stab on a terrific liner” by Frank Thomas, reported Prell.7

Jones had never thrown a no-hitter in Organized Baseball and stood just three outs away from becoming the first Cubs hurler to accomplish the feat since Jimmy Lavender against the New York Giants at the Polo Grounds in August 31, 1915. Two years later Vaughn lost his gem in the 10th, while Toney completed his for a 1-0 Reds victory. Jones’s glaring weakness as a pitcher was his control. He had walked 129 with Indianapolis in 1954; 178 in 267 innings with Triple-A San Diego in the Pacific Coast League in 1952; and was en route to leading the NL in walks (185 in 241⅔ innings) for the first of four times. Suffering from a case of the yips, Jones walked leadoff hitter Gene Freese, then uncorked a wild pitch facing pinch-hitter Preston Ward, who eventually walked as did Tom Saffell, hitless in 15 at-bats thus far in 1955.

Jones’s seventh free pass drew skipper Stan Hack from the dugout. The former Cubs great, known as Smiling Stan, was not smiling, however, with the game on the line. He and McCullough offered Jones words of reassurance, giving him time to collect his wits with the heart of the Pirates order due up. “I went farther with Jones than I ordinarily would have,” admitted Hack who adhered to a time-honored tradition of not removing a pitcher working on a no-no regardless of the player’s struggles. “But had the fourth Pirate reached base, he would have been out of there.”8

Jones reared back and punched out Groat. The former All-American basketball player at Duke University looked at three hard curves over the plate. Roberto Clemente, a 20-year-old rookie who entered the game batting .304, went down swinging. Frank Thomas, the Pirates cleanup hitter and most dangerous home-run threat, took Jones’s 136th pitch of the game, and 30th of the inning, for strike three.9

McCullough, the 38-year-old backstop who began his career with the Cubs in 1940 and had never caught a no-hitter, raced to the mound to congratulate Jones. Sportswriters besieged the batterymates in the clubhouse. “I pitched harder to those boys than to any of the others,” said Jones, elated at fanning the last three Pirates batters to become the first African-American and first former Negro League player to toss a no-hitter in the major leagues.10 Chimed in McCullough, “[I]n the ninth, I called for only two fastballs. Those were to Roberto Clemente.”11 Jones basked in the glory rightfully bestowed on an author of a no-hitter, yet the soft-spoken Ohioan deflected praise heaped upon him “I was just out there throwing fastballs and curves,” said Jones, finishing with six strikeouts. “Clyde deserves all the credit. He knows the batters and kept telling me how to pitch to them.”12

Jones emerged in 1955 as one of the best, yet inconsistent, pitchers in the league. He tossed eight strong innings, fanning 10 and walking eight against the Philadelphia Phillies to win his next start. At the end of the season, Toothpick Sam’s name was atop the NL leader board in strikeouts (198), strikeouts per nine innings (7.4), and fewest hits per nine innings (6.5), but also walks and losses (20) to go along with his 14 wins. No one-year wonder, Jones won 102 games, including a league-best 21 for the San Francisco Giants in 1959 (tied with the Milwaukee Braves’ Lew Burdette and Warren Spahn), in a career shortened by neck cancer initially diagnosed in 1962.