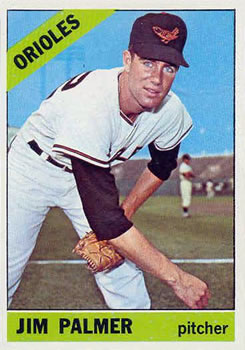 The Baltimore Orioles “carried the big sticks, blasting four homers for a 7-5 win”1 over the New York Yankees in a mid-May contest at Baltimore’s Memorial Stadium. A modest crowd of 25,740 turned out for the Sunday afternoon game. Baltimore’s rookie hurler Jim Palmer, making just the seventh appearance of his career, earned the victory and helped his own cause by hitting his first big-league home run.

The last-place New York Yankees (12-16), finishing a 14-game road trip, had taken the first two games of the four-game series against Baltimore (15-13). For game three of the series, right-hander Jim Bouton took the mound for New York, making his eighth start. His record stood at 3-3, with a 4.47 earned-run average. Baltimore sent southpaw Dave McNally to oppose him. McNally was 1-1, with a 3.24 ERA, and he had pitched at least eight innings in each of his three previous starts.

Bouton’s control was suspect from the start. In the top of the first, after retiring Paul Blair and Luis Aparicio, Bouton grooved a pitch to Curt Blefary, who deposited the pitch into the bleachers for his eighth home run of the season. Bouton then walked the bases loaded, issuing free passes to Boog Powell, Norm Siebern, and John Orsino. Bob Johnson flied out to center to end the rally. In the second, Bouton gave up a single to Davey Johnson and walked Blair after a McNally sacrifice, before getting out of the inning.

Meanwhile, McNally had cruised through the first two frames, giving up a lone single in the second to Joe Pepitone. But in the third, McNally was “wild and hittable.”2 New York sent seven men to the plate. McNally retired Doc Edwards on a grounder to third, but then the next five batters reached (two walks and three singles, with RBIs by Bobby Richardson, Tom Tresh, and Mickey Mantle), plating four runs, and “McNally went out of sight.”3 Orioles manager Hank Bauer brought in the rookie Palmer to replace his starter. To this point in the season, Palmer had been used as a mop-up reliever. Inserted into a game trying to prevent a blowout, Palmer called on the pitcher’s best friend, getting Hector Lopez to ground into a 4-6-3 double play to end the inning.

In their accounts of the game, the newspapers stressed that Palmer had earned a $50,000 signing bonus as a pitcher for the Orioles. In doing so, he had rejected offers from other clubs to play the outfield. “I decided to take the better offer and pitch.”4 It turned out to be the right decision for the future Hall of Famer.

In the bottom of the third, the Orioles struck again. With two outs, Siebern hit a solo homer (his third of the season), making the score 4-2, still in New York’s favor. An inning later, Bouton was tagged for the third homer of the game. This time, it was Palmer. Bob Johnson had grounded out and then Davey Johnson reached on an error by shortstop Phil Linz. Palmer settled into the batter’s box with one out. “I looked for the bunt sign, but didn’t see it, so I thought I’d better swing away,” he said.5 Palmer did swing and the result was that he hit his first career home run. He added, “I figure if I missed the sign, they’d tell me later.”6 The two-run shot knotted the score at 4-4. Palmer found out after the game that the bunt sign had not been flashed.

The score remained tied until the sixth. Palmer retired Lopez and Pepitone but then walked Clete Boyer. With Edwards batting, Palmer uncorked a wild pitch, advancing Boyer to second. Edwards drew a walk. With two on and two out, Yankees manager Johnny Keane inserted Tony Kubek to pinch-hit for Steve Hamilton (who had replaced Bouton on the mound to start the bottom of the fifth). Kubek hit a grounder to third baseman Bob Johnson’s left. Instead of attempting to catch the ball, Johnson ran to his right for the bag. The ball rolled into the outfield and Boyer scored the go-ahead run. Linz grounded out for out number three, but the Yankees had grabbed the lead.

Russ Snyder batted for Palmer in the bottom of the sixth, ending the rookie pitcher’s day. (Snyder struck out.) However, Blair drew a walk and Aparicio followed with a two-run round-tripper that gave the Birds the lead for good, ensuring that Palmer would earn the victory.

Don Larsen pitched the seventh for the Birds, keeping the score at 6-5. The 35-year-old right-hander, who had pitched for the Yankees in 1957, shut down his former team, blanking them on one hit. Then Bauer brought in Stu Miller to start the eighth. Miller (37 years old), described in the papers as “the ancient bubble-thrower” and “the old slowballer,”7 allowed one hit and also kept the New Yorkers scoreless in two innings of work. In his last six appearances (covering 14⅓ innings), Miller was unscored upon, allowing just two hits and three walks while striking out 18.

In the bottom of the eighth, Baltimore added an insurance run. With one out, Blair singled and stole second. An out later, Blefary doubled to left, driving Blair home. The final score was 7-5. Blefary, a Baltimore rookie who grew up in Brooklyn, New York, rooting for the Yankees, went 2-for-5 with two runs batted in in the game. He was 7-for-17 (.412) in five games against the New Yorkers, with three home runs, two doubles, and eight runs batted in. In his rookie season, Blefary batted .362 against the Yankees (17-for-47, more than 100 points above his season’s .260 batting average) and slugged .894 with six home runs and 13 runs batted in.

The Baltimore victory was not without miscues. Skipper Bauer said, “We played lousy and still won.”8 Late-inning defensive replacement Jackie Brandt made his second error in three games, playing right field. Davey Johnson was picked off base for the second time in three games. The third mistake occurred when Bob Johnson failed to try fielding Kubek’s single in the sixth, which put New York ahead 5-4.

The loss brought the Yankees’ road-trip record to 5-8.9 Bouton served up three home runs in his four-inning start and in 50⅓ innings of work so far in the season had “allowed nine gophers”10 and owned a 4.65 ERA. One bright spot for New York was the batting of Pepitone, whose two singles might have been wasted in this game. However, in seven games, he had 13 hits in 26 at-bats against the Orioles, with only 12 hits against the rest of the league. The Yankees collected eight hits in the game, but they were all singles. The Orioles put up 10 hits, but only three were singles. The rest were three doubles and four home runs.

Palmer truly earned the victory, both offensively and defensively. His homer tied the game and his pitching stopped the New York squad from blowing the game wide open. In his 19-season career, Palmer managed to hit only two other home runs,11 but his first was memorable, because it came in the game in which he earned his first big-league victory on the mound.

11 Because of the institution of the designated-hitter rule in the American League in 1973, Palmer’s last at-bat in a regular-season game came in 1972. In seven seasons, he had 489 at-bats, hitting three home runs.