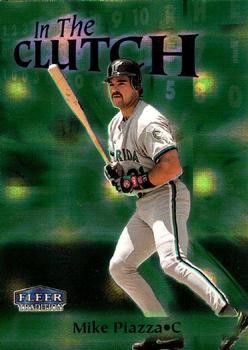 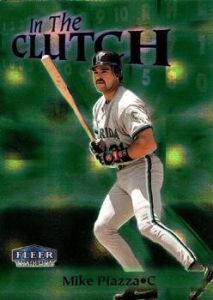 Coming into this Saturday night game in St. Louis, the focus was on the Florida Marlins’ new catcher, superstar Mike Piazza, who had just joined the team in a blockbuster trade with the Los Angeles Dodgers.

Afterward, however, all anyone could talk about was another slugging All-Star, St. Louis Cardinals first baseman Mark McGwire, and the home run he hit.

Piazza’s trade from the Dodgers to the Marlins became official late on Friday night, May 15, 1998, after Los Angeles had lost to the Montreal Expos at Dodger Stadium. The Dodgers icon was headed to Florida along with Todd Zeile for Gary Sheffield, Manuel Barrios, Bobby Bonilla, Jim Eisenreich, and Charles Johnson.

Once the trade was announced, Marlins general manager Dave Dombrowski called Piazza, who described the exchange in his autobiography: “[He] told me to take another day before flying to St. Louis to meet his team. Todd did, but I had no interest in sticking around Los Angeles any longer. I’d been kicked out of the nest and needed to start flapping my wings before I crashed to the ground.”1

Piazza would be joining a Marlins team that was 14-28 and in last place in the National League East Division, 17 games behind the Atlanta Braves. After winning the World Series in 1997, in only its fifth season since joining the NL as an expansion franchise, Florida had traded away nearly the entire core of the team.2 This trade meant that only two players who had started Game Seven of the fall classic just seven months earlier were still wearing the Marlins’ teal and black: Craig Counsell, who had scored the winning run in the 11th inning of Game Seven, and Edgar Renteria, who got the hit to drive him in.3

But few observers believed Piazza would remain a Marlin for long. The catcher himself, in one of his first reactions upon learning of the deal, realized that his South Florida stay might be short-lived. “I knew, Todd [Zeile] knew, and most everybody else knew that we wouldn’t be long for Florida; that the Marlins, who had won the World Series the year before and were dumping salary to start over, would flip us for cheaper players as soon as they could,” he wrote in his memoir.4

The Los Angeles Times, reporting on the trade in a package on the front page of the sports section, included an item in the sidebar that read: “Teams that contacted the Marlins Friday about acquiring the former Dodger catcher: Angels, San Diego, Baltimore, Chicago Cubs, Colorado, New York Mets, New York Yankees.”5 Even the Marlins’ manager, Jim Leyland, addressed it when he first met Piazza on May 16 in his office at Busch Stadium: “Mike, I’ve got to be honest with you,” he said. “We don’t know how long you’ll be here. We’re talking about a possible deal.”6

Piazza began his Marlins career on the bench, watching his new teammates take on the Cardinals on an 87-degree night a few blocks from the Gateway Arch and the Mississippi River. Left fielder Cliff Floyd, leading off for the visitors, opened the game with a double to right field on the second pitch from Cardinals starter Todd Stottlemyre. Two of the next three batters struck out, but in between the whiffs, Mark Kotsay – one of four members of Florida’s starting lineup with rookie eligiblity in 1998 – drew a walk.

With two outs and runners on first and second, fellow rookie Ryan Jackson worked the count full before pulling a triple into right field to give Florida a 2-0 lead. Gregg Zaun became Stottlemyre’s third strikeout victim to end the opening frame.

Liván Hernández, the MVP of the 1997 World Series at age 22, got the start for the Marlins. He walked Delino DeShields to start the bottom of the first before getting Ray Lankford to hit into a double play and striking out McGwire looking. Both pitchers worked around a baserunner in the second inning but did not yield a run.

Florida added on in the third, when Floyd again led off with a hit, this time a single to center. A balk by Stottlemyre moved Floyd to second ahead of Renteria’s RBI single up the middle to make it 3-0. Renteria was erased when Kotsay hit into a double play, and after Todd Dunwoody’s single, Stottlemyre got Jackson to fly to left for the third out.

St. Louis got on the board when David Howard, batting eighth in the order, led off the bottom of the third with his second home run of the season. It was the 11th homer given up by Hernández in 10 games to start the season. The Cuban right-hander avoided further damage that inning by retiring the next three, including strikeouts of Stottlemyre and Lankford. The Marlins couldn’t add to their 3-1 lead in the fourth, going down in order on just eight pitches.

Momentum had shifted in St. Louis’s favor. McGwire, on his way to breaking Roger Maris’s single-season record of 61 home runs, began the bottom of the fourth with his 16th homer on the way to 70. Piazza took note: “[McGwire] launched it against the St. Louis Post-Dispatch sign in center field. They measured it at 545 feet, which was almost unimaginable to me, because I knew how special it felt to hit one 445.”7 The drive was reported as the both the longest of McGwire’s career to that point and the longest in Busch Stadium history.8

The big blast sparked the Cardinals. Brian Jordan followed with a single and 39-year-old Willie McGee doubled to put runners on second and third. Hernández balked, scoring Jordan to tie the game, 3-3, and moving McGee to third. John Mabry got the go-ahead RBI on a fielder’s choice groundout to second base before Hernández retired the next two to end the inning.

Stottlemyre set down the Marlins in order in the fifth and sixth innings, part of a stretch of 11 in a row retired from the final out of the third through Zaun leading off the seventh. Counsell broke that streak with a double to right field and Dave Berg singled to shortstop to put runners at the corners.

That brought up the pitcher’s spot in the batting order, but with Florida trailing 4-3 and Hernández having thrown 113 pitches through six innings, Leyland called on Piazza to pinch-hit and make his Marlins debut.

“I wasn’t even wearing a cup,” Piazza recalled. “Thankfully, Todd Stottlemyre gave me a first-pitch slider and I lined it to center field for a sacrifice fly that tied the game.”9 Floyd popped out to end the inning, the score knotted, 4-4. Hernández’s final line read six innings, seven hits, four runs, four walks and nine strikeouts – tying his career high in K’s set in his previous start five days earlier.

Rookie left-hander Vic Darensbourg came on to pitch for Florida in the bottom of the seventh, tasked with facing St. Louis’s two-three-four hitters. Lankford greeted him with a single and McGwire – following up his stadium-shaking home run – popped out to first.

Darensbourg got the second out when his pickoff move caught Lankford stealing (a 1-3-6 putout), but Jordan broke the tie with his seventh home run of the season and the fourth given up by the southpaw from Los Angeles. That one run in one inning dropped Darensbourg’s record to 0-5, and he’d go 0-7 in 59 games in 1998.

Now with a 5-4 lead, Stottlemyre retired the last six Marlins in order to finish a seven-hitter, with two walks and nine strikeouts, improving his record to 5-3. The loss snapped St. Louis’s three-game losing streak and evened its record at 20-20, good for fourth in the NL Central, 5½ games behind the Houston Astros.

After the game, reporters were eager to get McGwire’s reaction to his home run. “Best ball I’ve ever hit,” he said. “I don’t think I could hit a better one.”10

Dunwoody, Florida’s center fielder, had the best view of the ball’s ultimate landing place. “It was totally amazing,” he said. “The only reason I ran back for it was that I didn’t want to show up [Hernández].”11

Hernández, whose 12 home runs allowed were tied for the NL lead, was less enthused when asked if he’d ever given up a home run like that. “I don’t find that very funny,” he said through an interpreter.12

2 Only 11 days after winning the World Series, owner H. Wayne Huizenga announced a plan to sell the Marlins to a group led by team President Don Smiley, citing $34 million in losses. “There is no question that we cannot continue to operate at the same payroll level that we have in the past,” Smiley said. See Larry Lebowitz, “Next: Champs Must Face Music,” South Florida Sun Sentinel (Fort Lauderdale), November 7, 1997: 1A.

12 Graziano, “McGwire’s Homer (545 Feet) Overwhelms Marlins.” The article states that the NL lead in homers allowed was 12. However, by the end of the day Brian Anderson of Arizona had the lead with 13 – but his game ended after midnight so it probably wasn’t available to the reporter for the story.