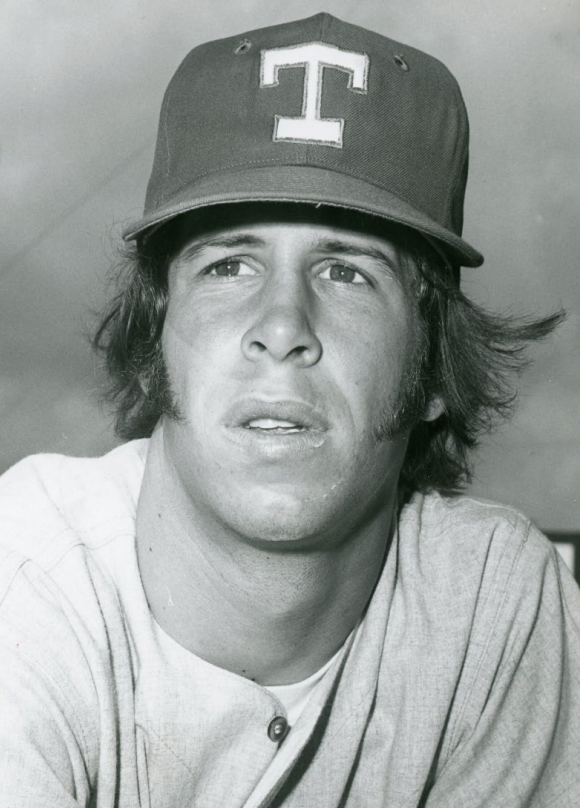 The Rangers’ May 17 game against the Royals in Kansas City was their 11th consecutive road game and the eighth in eight days. The team was already fatigued from their travels, as was evidenced by their four-game losing streak, and had not planned on playing the equivalent of a doubleheader on this evening, but they prevailed 4-3. As center fielder Joe Lovitto said, “Nobody wants to play five hours and lose. … that one should give us a lift.”1 Lovitto was correct; the 18-inning win over the Royals propelled the Rangers to five straight victories, their longest winning streak of the season.

The cliché “the first one is the hardest one” certainly held true for the first victory in the Rangers’ win streak as manager Ted Williams used 20 players — one fewer than his counterpart Bob Lemon employed — during the 4-hour 56-minute marathon. The Rangers continually squelched Royals rally attempts, so that those Kansas City fans from the crowd of 7,114 who remained to the end went home disappointed.

The Royals’ Jim Rooker had pitched a 5-0 shutout against the Rangers on May 16, but this time the Texas offense started with a bang against Kansas City’s starter, Dick Drago. Dave Nelson smashed a one-out triple and was followed by Don Mincher, who was mired in a zero-for-28 slump. Mincher seemed to be cursed, and not only at the plate. On the previous day, three of his front teeth, “all permanent caps, just fell out for no apparent reason, leaving the first baseman with a gaping smile — if he had any reason to smile.”2

Fortunately, Mincher gave himself a reason to flash his now gap-toothed grin as he lined a double to the left-center-field wall that drove in Nelson for the game’s first run. Hal King followed with a double of his own and later scored on Lovitto’s two-out single to give the Rangers a quick 3-0 lead.

The fact that Lovitto also began the game with a hit was an encouraging sign for the 21-year-old center fielder and his team after he had missed time with a back injury and then had been held out of the lineup in favor of Elliott Maddox until the preceding game against the Royals. Williams, whose own storied hitting career was known to all, said of Lovitto, “We think he has a great future in this game. … But the question is whether he’s ready to hit now or not.”3 On this night, Lovitto, who started in right field, acquitted himself admirably.

Kansas City began to chip away at the lead in the bottom of the second when Cookie Rojas led off with a single against Rangers starter Dick Bosman. Ed Kirkpatrick followed with an RBI double that plated Rojas and reduced the Royals’ deficit to 3-1. They recouped another run in the bottom of the fourth when Lou Piniella led off with a double and Rojas, the next batter, knocked him in with his second base hit of the game.

Drago, after his rough first inning, had settled down and kept the Rangers from adding to their lead during the remainder of his seven-inning stint on the mound, which included retiring the side in order in the fourth through sixth innings. When Bosman walked John Mayberry to start the bottom of the seventh, the Royals capitalized on the opportunity as Gail Hopkins, pinch-hitting for Drago, doubled to drive in the tying run against reliever Mike Paul, who had just entered the game. With the game now tied, neither team would score for the next 10 innings.

The Royals’ lack of runs from this point on was not due to a lack of scoring opportunities. In the bottom of the ninth, Mayberry and Paul Schaal greeted Paul Lindblad, the fourth Texas pitcher of the game (who had recorded the last out of the eighth), with back-to-back singles. Pinch-hitter Ron Hansen was intentionally walked to load the bases, a gamble that worked out for the Rangers in this instance. Freddie Patek flied out as did Amos Otis. Mayberry tried to score on Otis’s out. Maddox made an offline throw from center field, but catcher Rich Billings grabbed the ball on one bounce and applied the tag to Mayberry to send the game into extra innings.

In the bottom of the 10th, Lindblad again found himself in a jam after surrendering a one-out single to Piniella and a double to Rojas. Dennis Paepke was intentionally walked to load the bases once more for Kansas City. Williams’s managerial strategy paid off as planned when Mayberry hit a grounder to Lenny Randle at second base. Randle fired the ball home to get the force out on Piniella, and Billings doubled up a lollygagging Mayberry, who “didn’t run out the play,” at first base.4

The bottom of the 11th was not quite “déjà vu all over again” (as Yogi Berra may or may not have said), but there were enough similarities to the prior two innings that Williams may have felt trapped in a time warp. With Lindblad still pitching for Texas, Roger Nelson hit a one-out single and advanced to second on a sacrifice bunt by Patek. Otis then became the third Royals batter to receive an intentional walk in the past three innings as Williams returned to what was becoming a tried-and-true tactic. Richie Scheinblum, a former Rangers farmhand, looked to thwart the Rangers skipper’s strategy when he singled to center field, but Maddox fielded the ball and rifled a perfect throw to Billings to cut Nelson down at home plate for the third out.

If good things come in threes, that was not the case for the Royals in this game. That was three intentional walks in three consecutive innings that resulted in three runners being out at home. The three runs on which the Royals remained stuck would turn out to be insufficient for victory.

In the meantime, the Rangers’ offense had gone into an even greater slumber than it had in the previous night’s shutout. After their three-run barrage in the first, the Rangers went 16 innings without a run, a time during which they managed only five hits (they had accumulated four, including three extra-base hits, in the top of the first!). It was fitting, therefore, that the Rangers would win the game in the 18th inning without managing a hit of any kind.

Ted Abernathy, the fourth Royals reliever, who had entered the game in the top of the 17th inning, got Larry Biittner to fly out for the first out of the 18th. Lovitto reached first on catcher’s interference by Paepke. Rangers reliever Jim Panther, who had pitched the 17th, batted for himself and reached safely when Abernathy threw his bunted ball away as he tried to get the force at first; the error allowed Lovitto to advance to third and put Panther on second. Lemon tried Williams’s approach for ending potential rallies when he had Abernathy issue an intentional walk to Jim Driscoll, who had entered the game at second base in the 16th. With the bases now loaded, Lemon brought in Tom Murphy to pitch to Toby Harrah.

Harrah lined a shot that deflected off Murphy’s glove and was fielded by shortstop Patek, who flipped to the second baseman Rojas for the force out. Driscoll’s slide took out Rojas so that he was unable to make a throw to first to complete the double play, and Lovitto crossed home plate with an unearned run that gave the Rangers a 4-3 lead. Maddox flied out to end the Rangers’ “rally,” and Panther set the Royals down in order in the bottom of the inning to preserve a hard-fought victory. Mayberry, who had a night to forget, made the Royals’ final out on a grounder to second.

If there was a hero of the game, it may have been Lovitto, who had two hits, two walks, and an RBI, and scored the game-winning run. Observers believed at the time that “Lovitto epitomizes the Ranger youth movement — an outstanding young talent with a can’t-miss tag, but still there’s the matter of proving himself.”5

One game does not make a career, however, and Lovitto never did prove himself. He managed a lowly .216 batting average in only 763 at-bats over parts of four seasons with Texas, and his playing career ended after the 1975 campaign. On May 17, 1972, he at least had a moment in the spotlight of the Rangers’ longest game of the season.

In addition to the sources listed below, the author also consulted Baseball-Reference.com and Retrosheet.org.