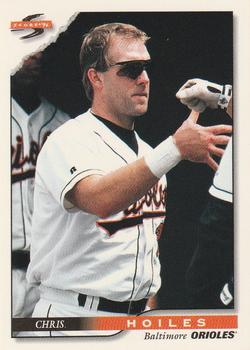 When manager Lou Piniella’s Mariners opened a weekend series in Baltimore on Friday night, May 17, 1996, it presented a matchup of two ballclubs on the rise. Seattle came in with a record of 21-18, after reaching the postseason for the first time in franchise history the year before. Led by the sweet swings of Ken Griffey Jr., Edgar Martinez, and Alex Rodriguez, they had scored a whopping 5.92 runs per game to this point in 1996 (despite being no-hit by Dwight Gooden three days earlier in New York).

The Orioles had not been to the playoffs since 1983. But they had spent big money after the 1995 season, bringing in free agents including second baseman Roberto Alomar to join their beloved shortstop Cal Ripken Jr., and they entered this contest just 1½ games behind the New York Yankees in the AL East. Like Seattle, the Orioles featured a powerful offense and a below-average pitching staff.

Rookie right-hander Jimmy Haynes allowed only an infield single by Griffey in a scoreless first inning. His counterpart, fellow rookie Bob Wolcott, was not as sharp in the bottom half of the frame. Center fielder Brady Anderson ripped a leadoff double, then scored on a home run off the bat of Luis Polonia and it was 2-0, Baltimore. The Orioles loaded the bases with one out, but Wolcott escaped further damage by getting Ripken to ground into a force out at the plate, then retiring catcher Chris Hoiles on a fly out.

The Orioles added two more in the second, when a leadoff walk to Jeffrey Hammonds and a one-out single by Polonia set the stage for Rafael Palmeiro’s two-out, two-RBI double off the top of the wall in right-center.1 But the Mariners got those two runs right back in the top of the third on a hit by Darren Bragg, a ringing double by Griffey, and a line-drive single by Martinez. Then it was Haynes’s turn to strand the bases loaded, when he got second baseman Joey Cora on a groundball handled by Alomar.

Baltimore knocked Wolcott out of the game in the third. After a single by Ripken and a one-out double by Hammonds, veteran southpaw Joe Klink came on and struck out Anderson. When right-handed-hitting Mike Devereaux pinch-hit for Polonia, the Mariners brought in right-hander Bob Wells, who issued back-to-back walks to force the fifth Orioles run home, then gave up a two-run single to Palmeiro to make it 7-2.

Haynes held that lead through the fourth and fifth innings, retiring the Mariners’ Cora with the bases loaded again on his final pitch. He left the mound confident that he was about to earn his fourth major-league win. Unfortunately for Haynes, Arthur Rhodes, who took over in the top of the sixth, surrendered two runs on three hits and a walk before Roger McDowell was summoned to relieve him. A throwing error by Alomar allowed Rodriguez to score to make it a 7-5 game, and then third baseman B.J. Surhoff’s throwing error on a single by Dan Wilson made it 7-6. McDowell got Cora to fly out to end the inning. It was the third straight at-bat in which Cora made the third out with multiple runners aboard.

Cora was involved in another ignominious play in the bottom of the sixth, on a ball hit by Surhoff. As Buster Olney described it for the Baltimore Sun: “Surhoff was running to first base … when Cora’s off-balance throw drilled him in the left ear. Surhoff, staggered by the throw, stepped awkwardly and turned his ankle inward.”2 Surhoff was credited with a single, but had to leave the game.

In the seventh, McDowell gave up hits to Rodriguez and Griffey, but he struck out Martinez to preserve the 7-6 lead. The sellout crowd of 47,529 at Camden Yards was jubilant as they stood for the seventh-inning stretch. They were even more so when a few minutes later Palmeiro stroked a two-run homer off Scott Davison – Palmeiro’s fifth hit of the game, to go along with six RBIs. Orioles 9, Mariners 6.

But the Mariners’ offense would not go down quietly. Three straight hits off McDowell to open the eighth cut the lead to 9-7, with runners on first and third. Cora hit a soft groundball that McDowell fielded and flipped home in time for Hoiles to put the tag on Seattle’s Paul Sorrento for the first out of the inning. Jesse Orosco emerged from the bullpen to get the second out.3 Alan Mills entered the game to face pinch-hitter Brian Hunter, and walked him to load the bases for Rodriguez.

Rodriguez was blossoming in 1996, at the age of 20, on his way to his first All-Star Game appearance and his only AL batting title. And on this comfortable May evening in Baltimore, with the bases loaded and two out in the top of the eighth, he blasted a grand slam to give Seattle the lead, 11-9. The hometown fans were stunned to silence.

Ripken, who was extending his record by playing in his 2,192nd consecutive game, reawakened the crowd with an eighth-inning solo homer off Mike Jackson to bring the O’s back within a run, 11-10.

There was presumably no doubt in Piniella’s mind about which of his relievers he would entrust to finish off this victory. Norm Charlton had helped Piniella win the World Series with the Reds in 1990. Over the next five seasons, the mullet-topped left-hander got traded, and released. He underwent Tommy John surgery4 and then was hit in the face by a line drive shortly after returning.5 But he had been dominant for the Mariners down the stretch in ’95, a key contributor to their AL West championship. When Piniella handed him the ball with two out in the bottom of the eighth on May 17, Charlton was the undisputed anchor at the back end of the bullpen, with a 1.69 ERA and a team-high five saves so far in 1996. He walked Anderson, but retired Mike Devereaux for the third out.

Despite having so epically coughed up the lead in the eighth, Mills took the mound again to pitch the ninth inning for Baltimore. Some fans headed for the exits after the Mariners’ Jay Buhner drilled a two-run homer to extend the score to 13-10. Those who remained would be rewarded in the bottom of the ninth.

Alomar drew a leadoff walk. Charlton struck out Palmeiro – the only time he was retired all night. But Bobby Bonilla delivered a hard-hit double into left, sending Alomar to third and bringing the tying run to the plate. The next man up was light-hitting utility infielder Jeff Huson, who had replaced the injured Surhoff. Manager Davey Johnson scanned his bench in search of a pinch-hitter who could knock one out of the park. But having already called upon Devereaux, the best option Johnson had was Bill Ripken, who fouled out, bringing up his elder brother representing Baltimore’s last hope. Cal worked a walk (Charlton’s second of the inning and third of the game) to keep the Orioles alive and load the bases for Hoiles.

Chris Hoiles was never an All-Star. He never hit 30 home runs in any season. Never won a Gold Glove. But he certainly had a flair for the dramatic during his 10-year career, spent entirely with the Orioles. His first big-league home run had been a walk-off shot at old Memorial Stadium in 1990. The following year he had hit a game-tying grand slam in the ninth inning of a game at Kansas City. In ’95 his ninth-inning homer won a game at Chicago.

And on May 17, 1996, he stepped to the plate against Charlton with three on, two out, and his team down by three in the bottom of the ninth. And, fittingly, he worked the count full, giving all three runners a head start. And then Hoiles lifted a hanging forkball just beyond the outstretched glove of a leaping Brian Hunter, into the first row of seats near the 364-foot marker on the left-field fence, for that most dramatic hit conceivable – a walk-off grand slam.

“Those who are still here at Camden Yards are just berserk! You’ve never seen a scene like this!” exclaimed broadcaster Jon Miller as Hoiles’ teammates gathered around home plate to pummel him in celebration when he arrived.6

This improbable 14-13 win stands out as one of the most memorable highlights of the Orioles’ 1996 season, when they brought playoff baseball to Camden Yards for the first time.

In addition to sources cited in the Notes, the author consulted Baseball-Reference.com and Retrosheet.org.

3 This was Orosco’s 834th career appearance on the way to the major-league record of 1,252.