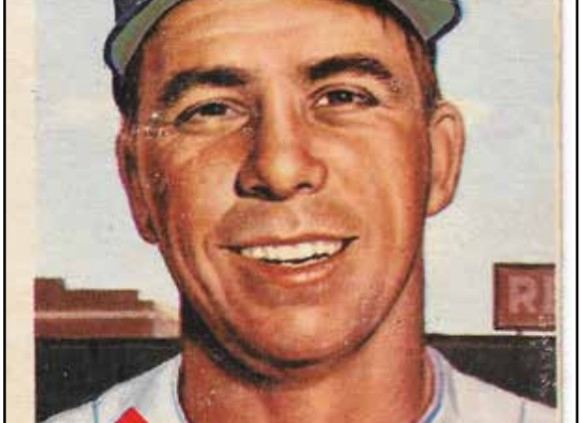 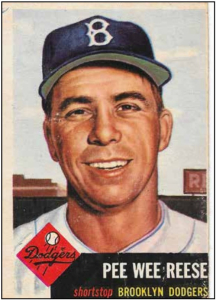 St. Louis third baseman Tommy Glaviano was having a solid start to the 1950 baseball season. Slotted in as the Cardinals’ leadoff hitter, he was hitting .342 with an on-base percentage of .464. He’d made four errors in his 20 games at the hot corner, but no one could have foreseen the disastrous defensive inning that was about to befall him to help finish off one of the biggest comebacks in Brooklyn Dodgers history.

The Cardinals were looking to avoid being swept by Brooklyn, after well-pitched games by Preacher Roe and Don Newcombe led the Dodgers to victories in the first two games of the three-game series. What was about to transpire in the third game, is what Harold Burr of the Brooklyn Daily Eagle called “one of those games that might well be the making of one team and the ruination of the other.”1

A pair of veteran southpaws battled in the series finale, as Brooklyn sent Joe Hatten, 1-2 with a 4.33 ERA, to the mound to face Howie Pollet, 3-3 with a 2.17 ERA, on a chilly, overcast 52-degree day at Ebbets Field.

Events did not go Hatten’s way to start the game. Chuck Diering reached on an error by Dodgers third baseman Billy Cox with one out in the top of the first. He advanced to third when red-hot Stan Musial, who entered the game hitting .451, banged one off first baseman Gil Hodges’ knee and into the grandstand for a ground-rule double. After Johnny Lindell was intentionally walked and Enos Slaughter popped out, Marty Marion singled Diering and Musial home to give St. Louis a 2-0 lead.

The Cardinals continued to chip away at Hatten as the game progressed. St. Louis scored another run on Diering’s RBI double in the second inning. Hatten was fortunate to escape further damage when Slaughter lined out to left field with the bases loaded to end the frame. The Cardinals put together another rally in the fourth inning. Tommy Glaviano led off the inning with a home run. After the Redbirds put runners at first and third, Dodgers manager Burt Shotton pulled Hatten from the game and replaced him with right-hander Erv Palica. The first batter Palica faced, Marty Marion, hit a groundball that looked as though it would be the third out of the inning, but it got through Gil Hodges at first and two runs crossed the plate to put the Cardinals comfortably in front, 6-0.

St. Louis continued the onslaught in the sixth inning when Johnny Lindell blasted a two-run home run off Billy Loes, a 19-year-old reliever making his major-league debut. It was Lindell’s first hit as a Cardinal after he had been purchased from the Yankees. The two-run shot gave the Cardinals a seemingly insurmountable 8-0 lead.

Meanwhile, Howie Pollet was making short work of the Dodgers. Through six innings, he’d allowed only two hits and three walks. However, in the seventh he began to show signs of tiring when he gave up singles to Duke Snider and Roy Campanella to start the inning. He was able to retire the next three batters and escape the inning without a Dodger crossing the plate. After seven innings, the Cardinals led 8-0, and as Dick Young wrote in the New York Daily News, “[T]he Brooks had nicked Howie Pollet for only four hits. They had looked more miserable than the weather. They hadn’t hit, their pitching had been punk, and even their defense, which has been Brooklyn’s matchless pride, had been butchered.”2

The gloomy atmosphere for the Dodgers and their fans was amplified as rain started falling on Ebbets Field to start the eighth inning. Jim Russell led off the eighth with what looked to be a harmless single into left field. Jackie Robinson drilled a double to right and Carl Furillo sent a ball through the raindrops and into the left-field seats to cut the Cardinals’ lead to 8-3. The Dodgers faithful rejoiced, as “the 17,579 fans, including Ladies Day guests and Knothole Kids started a mad clamor on a rising crescendo as the runs went clattering impossibly over the dish.”3 Hodges lined out to center field for the first out of the inning. Duke Snider singled and Campanella followed by drilling a ball that was caught by left fielder Lindell. Bruce Edwards, pinch-hitting in the pitcher’s spot, lined a single to left and when the ball was bobbled by Lindell, Snider raced to third. That was the end of the line for Pollet. Dick Young wrote, “Seven straight line drives flew off the Brooks bats. Rarely in his life has Pollet been hit so hard.”4

The Cardinals’ bullpen was shorthanded –as Ted Wilks was out with an elbow injury – so manager Eddie Dyer turned to Gerry Staley, who had a 5.35 ERA in seven games, to try to end the Dodgers’ offensive outburst. Pee Wee Reese greeted the new hurler by rapping the ball through the left side of the infield, bringing home Snider and cutting the Cardinals’ lead to 8-4. But with runners at first and second, Staley was able to avoid further damage by getting pinch-hitter Gene Hermanski to pop out for the final out of the inning.

Ralph Branca came out of the Dodgers bullpen in place of Rex Barney who’d thrown a shutout eighth, and retired the Cardinals in order in the ninth to keep the deficit at four runs heading into Brooklyn’s final at-bat.

Rain was falling steadily as Jim Russell collected his third hit of the afternoon, a double into the right-field corner, to lead off the bottom of the ninth. Jackie Robinson cashed in Russell with another double into the right-field corner to cut the Cardinals lead to 8-5 and cause Dyer to pull Staley in favor of southpaw Al Brazle. Brazle retired Furillo on a popup for the inning’s first out. Hodges then hit a bouncer to short and beat Marion’s throw to first. Snider, after being behind 1-and-2 in the count, worked a walk to load the bases, and then catastrophe struck the Cardinals, specifically third baseman Tommy Glaviano.

Harold Burr wrote: “Fate decreed that the last three Dodgers should make (Glaviano) their target. It was raining steadily and hard, the ground under his spikes treacherous and the ball slippery, by way of excuse.”5 Roy Campanella stepped up to the plate representing the winning run. He hit a sharp ground ball to Glaviano, who fielded the ball cleanly and fired a wild throw to second base, forcing Red Schoendienst to come off the bag, and all hands were safe as Robinson scored to cut the lead to 8-6. Cloyd Boyer was brought in to replace Brazle and try to finish the game for St. Louis. He seemed to do his job when he induced pinch-hitter Eddie Miksis to hit a “high bouncer right at Glaviano.”6 Rather than throwing to second for what looked like “a certain force out at second and a probable double play,” Glaviano fired home to try to force Hodges.7 But the throw was once again well wide of the mark and catcher Del Rice had to “dive flat on his face for the save” as Hodges crossed the plate.8

Pee Wee Reese came up with the tying run at third and Campanella representing the winning run at second. Reese became the third consecutive batter to hit a grounder to Glaviano. Dick Young wrote: “This time, Tommy didn’t throw wild. He didn’t throw at all, because he never held the ball. He had planned to scoop it up, step on third, and fire to first – but in moving toward third, he let the ball zip through his legs and into left.”9 Ebbets Field erupted as the tying and winning runs crossed the plate. Roscoe McGowen reported in the New York Times, “The downpour of torn papers that fluttered down on the field when Campanella raced over the plate with that all-important run turned the drizzle into a snow storm.”10

The improbable had happened as three straight balls hit to Glaviano ended up as errors, tying a major-league record for errors in a single inning.11 Cardinals manager Eddie Dyer summed up his team’s mood, saying: “That was the most bitter defeat of any I’ve had in the years I’ve managed.”12

Brooklyn had managed only two hits through six innings, and trailed 8-0 through seven, but rallied for nine runs in the final two frames for an improbable victory. An afternoon that began slowly for the Dodgers suddenly changed in the eighth inning and ended with “a deluge of rain, runs, hits, and errors.”13