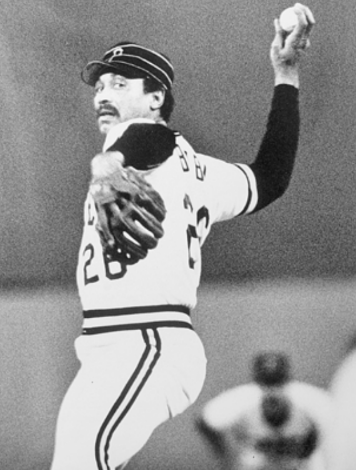 On the evening of Tuesday, May 19, 1981, a scant crowd of 5,514 fans at Three Rivers Stadium saw Jim Bibby throw a near-perfect game against the Atlanta Braves while helping his own cause by hitting two doubles, scoring one run, and collecting an RBI in the process. Bibby later said it was the best game of his career, even better than the no-hitter he threw against the Oakland A’s in 1973 when he played for the Texas Rangers.1

Just two seasons removed from their 1979 World Series championship season, the banged-up Pirates entered the game owning a 12-16 record. Dave Parker, John Candelaria, Tony Peña, Willie Stargell, Rod Scurry, Ernie Camacho, Bill Robinson, and Don Robinson were all sitting out with injuries.2 Another issue certainly on the minds of players and fans was the players strike deadline looming on the horizon just 10 days away. The main issue on the table was free-agent compensation, and in fact the players would end up striking on June 12, beginning the first midseason strike in major-league history.3For a couple of hours on May 19, though, the five thousand in attendance got a glimpse of greatness.

Terry Harper led off the top of the first with a bloop single to right field on the second pitch he saw from Bibby, a fastball away. It was the only baserunner the Braves would have for the game as Bibby settled in and set down the next 27 batters in order, using only 93 pitches and striking out three.

Claudell Washington batted second for the Braves. Bibby popped him up to Tim Foli at shortstop. Next up in the first inning was Biff Pocoroba, the Atlanta third baseman. He grounded out to first base, moving Harper to second, where he was stranded by 1971’s American League Rookie of the Year Chris Chambliss, who grounded out to end the inning. It was the last time all night a Braves baserunner would be standing on a base.

In the bottom of the first inning, 42-year-old future Hall of Famer Phil Niekro took the mound for the Braves. Just a week earlier he had pitched a complete-game two-hit shutout against the Pirates in Atlanta and he picked up right where he left off as Lee Lacy, Tim Foli, and Bill Madlock were set down in order.4 Lacy and Madlock both struck out.

Center fielder and future NL MVP (1982 and 1983) Dale Murphy led off the second inning followed by Glenn Hubbard and Bruce Benedict. Bibby induced a groundball to short, a lineout to third, and a flyout to center field to take care of all three.

The Pirates opened up the scoring in the bottom of the second inning when Omar Moreno drove in Mike Easler with a single to left field. Easler had reached on a fielder’s choice after Jason Thompson’s leadoff hit to right field. Phil Garner singled Easler to third before getting caught stealing second base by Benedict.

Big Jim Bibby, whose hands were so large he could reportedly palm eight baseballs facedown, climbed back onto the mound owning the one-run lead that would prove to be all he’d need (but not all he’d get) for the top of the third inning to face the bottom of the Braves order.5 He struck out Rafael Ramirez looking, made short work of Phil Niekro, who grounded out to third, then got Terry Harper on a fly to left field to end the inning.

Bibby himself led off in the bottom of the third. He had been an All-Star in 1980 and finished third in the National League Cy Young Award voting that year.6 He would end up missing all of 1982 due to injury, then come back to win five games (losing 12) in 1983 for the Pirates. His 1984 season with the Texas Rangers would be the last season of his major-league career.7 Bibby grounded out to the shortstop, after which Lee Lacy was out on a foul ball to the first baseman and Foli flied out to left.

The Braves’ batters were dispatched quickly and efficiently in the fourth and fifth innings. All remained quiet until the bottom of the fifth inning when Bibby hit the first of his two doubles, a two-out hit up the middle. He came around to score when Lee Lacy, the next batter, hit a double to left field.

Atlanta again offered no resistance to Bibby’s dominating pitching performance in the sixth with Ramirez, Niekro, and Harper going down in order. The Pirates chased Niekro in the bottom of the sixth as Thompson led off with a single to right, followed by another single off the bat of Mike Easler. Niekro got two outs as Garner grounded into a fielder’s choice, erasing Thomson at third base, and Moreno flied out to center. But catcher Steve Nicosia, filling in for injured rookie Tony Peña, doubled to center, scoring Easler and Garner, thus ending Niekro’s night. Bibby promptly greeted Atlanta reliever Rick Mahler with an RBI double to left, bringing the score to what would be the final: Pirates 5, Braves 0.

In a wonderful final moment of poetic justice, Bibby faced Terry Harper with two outs in the bottom of the ninth and induced Harper to make the last out on — of all things — a fly ball to right field. The entire game took only 1:57 to play.