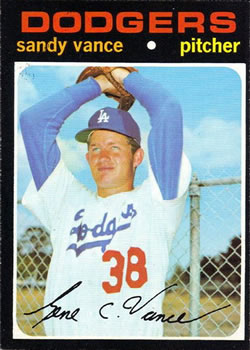 He wasn’t kin to former Dodger mound greats Dazzy Vance or Sandy Koufax, but Gene “Sandy” Vance1 was a vital component in manager   Walter Alston’s Los Angeles rotation when Bill Singer was lost to unusual circumstances early in the 1970 season. Singer, a 20-game winner for the Dodgers in 1969, was sidelined by infectious hepatitis stemming from exposure in spring training.2

The Dodgers made it through 15 games with a starting corps of Claude Osteen, a weakening Singer, Don Sutton, and Alan Foster.3 Joe Moeller had started four games for Alston in 1969 and was reported to be the manager’s first choice to replace Singer. But Alston “switched plans and tabbed young Sandy Vance as Singer’s immediate replacement.”4 Vance, 23, had been a high school standout in Pasadena, and then moved on to higher-level success at Stanford University, where he was 27-3 in three varsity seasons. The right-hander had been on major league radar early— he was picked but opted not to sign in the second round of the June amateur drafts in both 1965 and 1967 and the January secondary draft in 1968. After he completed his Stanford political science degree, Vance signed with the Dodgers when they selected him in the second round of the June 1968 draft.5

Vance started 1970 with the Pacific Coast League (AAA) Spokane Indians, managed by Tommy Lasorda. His 16 strikeouts and one earned run over 15 2/3 innings there prompted Alston to give him Singer’s rotation spot. “He’s an outstanding young pitcher in our organization. It won’t do him or the club any good if he just comes up and sits,” Alston said.6 He was called up on April 23 and debuted in front of 26,708 in Dodger Stadium on Sunday, April 26, starting against the defending World Series champion Mets and Tom Seaver. He pitched creditably over six innings but served up two home runs and took a 3-1 loss. Three days later, still at home, he spun a complete-game four-hitter against Montreal, and won three more starts with a no-decision mixed in as his next turn rolled around on May 22.

The defending National League West champion Atlanta Braves were in town on a western swing.7 Osteen and reliever Jim Brewer had handled them 6-3 in Thursday night’s series opener despite two home runs by Orlando Cepeda. Twenty-nine-year-old righty Pat Jarvis was Vance’s mound opponent as 45,716, the largest Dodger Stadium crowd of the season to date, settled in on Friday night. Vance retired Felix Millan and Mike Lum before walking both Hank Aaron and Rico Carty to bring up Cepeda in a first-inning pressure situation entirely of Vance’s own making. The rookie toughened and got Cepeda on a fly to Willie Crawford in right field.

The second inning was easier, as Vance got Clete Boyer and Gil Garrido on ground balls to third and Bob Didier on a fly to center. In the third, he retired Jarvis on a pop to third but as the Atlanta order turned over for the first time, Millan singled for the first hit off Vance, then stole second with Lum batting. When Maury Wills, the Dodger shortstop, failed to handle Lum’s ground ball Atlanta had runners at the corners with one out and Aaron, hitting .329, up. Aaron stroked a single to center, collecting one of his career 2,297 RBIs8 as Millan scored and Lum moved to second. Carty flied out, but Vance walked Cepeda to load the bases before he nailed Boyer on a strikeout.

Meanwhile, Jarvis was cruising along. The Dodgers posed a threat in the fourth on Willie Davis’s one-out single and a walk to Wes Parker before Billy Grabarkewitz and Crawford struck out.

Vance navigated the Braves’ fourth and fifth innings without difficulty, capping the fifth by inducing a double-play ground ball from Aaron after Lum’s walk. The rookie had to pitch out of a real jam in the sixth, though. Carty walked to lead off the inning, then Von Joshua’s two-base error on Cepeda’s fly to left and an intentional walk to Boyer loaded the bases with no outs. Vance bore down, as Garrido grounded to third, forcing Carty at the plate for the first out. Didier, a light-hitting catcher, flied to shallow center as Cepeda held at third. Vance prevailed as Jarvis rolled into a force out.

Jarvis stranded Joshua after his leadoff double in the Los Angeles sixth. Millan, Lum, and Aaron went out in order against Vance in the top of the seventh. With two outs in the bottom of the inning and Grabarkewitz on second and Tom Haller on first, Alston lifted his starter for pinch-hitter Manny Mota; Mota struck out.

Vance was done for the night, having yielded two singles, six walks, and the third inning run, earned despite the error. Moeller pitched two scoreless innings to finish up for the Dodgers, allowing two baserunners on a hit and an error. Jarvis soldiered on to a 1-0 win, getting an out when defensive replacement Tony Gonzalez ran down Joshua’s leadoff drive to left in the eighth9 and pitching out of a one-out, first-and-third, situation in the Los Angeles ninth.

Out for just shy of two months, Singer came back to work two innings in a home start against the Cubs on June 14 and by July 5 he was back to full strength with a two-hit shutout at San Francisco. And on July 20 at Dodger Stadium, he capped his return with a no-hitter against the Phillies.10

Singer’s return dovetailed nicely with the rest of Vance’s season. The rookie was optioned back to Spokane in mid-June and completed a week of remaining military reserve duty before returning to the rotation.11 There, he fit in seamlessly for Lasorda, posting a 2.83 ERA before being recalled to Los Angeles on August 15.12

In addition to the sources cited in the Notes, the author also utilized the Baseball-Reference.com and Retrosheet.org websites for box scores, player, team, and season pages, pitching and batting logs, and other data pertinent to this article.

1 A smiling, light-haired, Vance told TSN stringer Gordon Verrell, “No, I’m no relation to Dazzy Vance, and I got the name Sandy the day I was born. My grandfather decided to call me Sandy instead of my real name, Gene, and that was that.” Gordon Verrell, “Sandy Vance May Be Dodger Repeat of Daz and Koufax,” The Sporting News, May 16, 1970, 10.

2 Dodger reliever Pete Mikkelsen apparently contracted hepatitis on a vacation trip to Mexico and required hospitalization during spring training. Singer had visited Mikkelsen in the hospital but showed no immediate symptoms. Melvin Durslag, The Sporting News, May 16, 1970, 2.

3 Singer pitched through spring training and started the Dodgers’ second game of the season on April 8. He started again on April 12 and in Cincinnati on April 16, but lasted only four innings. He was diagnosed with infectious hepatitis at that point and went on the disabled list on April 22. Durslag, May 16, 1970, 2.

9 “When [Joshua] hit that ball I knew it was a home run or at least a triple,” Jarvis said. Atlanta manager Luman Harris had this retort on his defensive move replacing Rico Carty with Gonzalez: “That was some kind of managing, that’s what it was.” “I’m not sure Carty would have caught it,” Alston mused. Gordon Verrell, Vance Loses 3-Hitter,” Long Beach (CA) Independent Press-Telegram, May 23, 1970, C-1.

10 Singer cost himself a perfect game. He hit Oscar Gamble in the first inning, then threw wildly on a pickoff attempt with Gamble on first base, allowing him to advance to second. Singer had another throwing error on a comebacker by Don Money in the seventh inning.