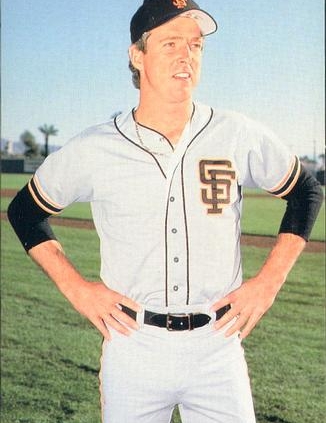 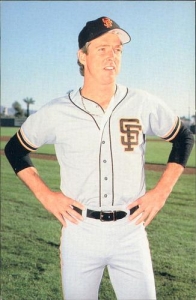 You could understand if the self-assured New York Mets felt more than certain that they would complete a three-game sweep of the upstart San Francisco Giants when the teams squared off on May 22, 1986, at Candlestick Park.

The Mets had beaten the Giants in the first two games, 2-1 and 7-4, boosting their record to 25-9 – the best in baseball – and extending their lead in the National League East Division to five games over the Montreal Expos. For the finale, New York was pitching its ace, budding superstar Dwight Gooden. The 21-year-old reigning NL Cy Young Award winner owned a minuscule major-league best 1.25 ERA to go with a 5-1 record. He also had won three of four career decisions with a 0.82 ERA against the Giants.1

Opposing Gooden was 34-year-old veteran Mike Krukow, off to a solid start with a 5-3 record and a 4.07 ERA. San Francisco, coming off the only 100-loss season in franchise history, was 22-17 and in a virtual tie for the NL West Division lead with the Houston Astros (21-16).

The Giants were confident; the Mets cocky.

What had the makings of a bona fide pitchers’ duel failed to come to fruition as the Giants picked and pecked at Gooden and two relievers en route to a 10-2 victory before a Thursday-afternoon crowd of 27,422.

Ever-enthusiastic Giants manager Roger Craig, in his first full season at the helm, gave his team an infusion of “Humm Baby” positivity during a pregame meeting.

At first it appeared that the Mets would extend their winning streak to four games. Mookie Wilson led off the game with a single and, after Wally Backman advanced him to second with a sacrifice, Keith Hernandez stroked his second home run of the season to give the visitors a 2-0 lead.

However, that was all New York would muster. Literally. After surrendering the home run, Krukow set down 23 straight Mets through eight innings of quality work. He recorded 10 fly outs, seven groundouts, five strikeouts, and one lineout. Greg Minton pitched a perfect ninth, getting two groundouts and a strikeout.

The Giants scored an unearned run in the second on a two-out RBI single by Jose Uribe that scored Chili Davis, who had led off with a walk and appeared to be picked off first base but reached second on an errant throw by Gooden.

With the Giants trailing, 2-1, in the fourth, Davis led off with a double and Robby Thompson drew a one-out walk. Uribe singled to score Davis and tie the game, with Thompson advancing to third. After Uribe stole second, Krukow helped his own cause with a suicide squeeze bunt that plated Davis and put San Francisco ahead, 3-2.

The first four Giants singled in the fifth: Will Clark, Chris Brown, Jeffrey Leonard, and Davis. Davis’s bloop hit scored Clark and Brown, sent Leonard to third, and knocked out Gooden. After Davis stole second, reliever Rick Aguilera uncorked a wild pitch that allowed Leonard to race home and Davis to move to third. Davis scored the fourth run of the inning when Aguilera was called for a balk, extending the Giants’ lead to 7-2.

Gooden labored through four-plus innings – his shortest outing of the season3 – throwing 111 pitches and allowing seven runs (six earned) on nine hits – seven of them to the opposite field – with two walks and three strikeouts. He gave up more than half as many runs as he had in his eight starts combined entering the game (13), and his ERA rose to 1.96.4

“We discussed staying away from the high fastball,” Clark said. “Otherwise, we treated him like any ordinary pitcher. You can’t go to the plate thinking he’s better than you are.”5

In the seventh, against Aguilera, Davis came up with his third hit of the game to plate Leonard, who had reached on a two-base error by Wilson, the Mets’ center fielder.

Doug Sisk relieved for New York in the eighth and walked Dan Gladden with one out. Clark singled and Brown reached on a fielder’s choice as Clark was forced out at second. With runners on the corners, Leonard and Davis rapped back-to-back RBI singles to round out the scoring.

“We think we can beat anybody,” Brown said. “We’ve shown them we’re a team to reckon with. … We’ve probably got the best attitude in the National League.”7

Just over a week later the teams met again in New York, with the Giants winning two of three games, capped by another Krukow victory in the finale on June 1.8 The Mets won the season series, 7-5, but San Francisco’s five wins tied Houston for the most by an NL West opponent.9

Both Krukow and Gooden went on to be selected as NL All-Stars. In his finest big-league season, Krukow posted a 20-9 record with a 3.05 ERA, ranking among the NL leaders in wins (second), ERA (eighth), complete games (10 – fourth), shutouts (2 – tied for fifth), innings pitched (245 – sixth), and strikeouts (178 – ninth). He finished third in voting for the Cy Young Award, behind Mike Scott of the Astros and Fernando Valenzuela of the Los Angeles Dodgers. Gooden, meanwhile, was seventh in the Cy Young balloting after going 17-6 with a 2.84 ERA. Among the league leaders he was tied for second in complete games (12), tied for fourth in strikeouts (200), fifth in ERA and innings pitched (250), and tied for fifth in wins and shutouts (2).10

The Mets paraded their way to the NL East title, going a franchise-best 108-54 to top the runner-up Philadelphia Phillies by a whopping 21½ games. The Giants wound up third in the NL West, 13 games behind the Astros. San Francisco’s 83-79 record marked a 21-game improvement from 1985, and the Giants became just the ninth major-league team to post a winning season after a 100-loss campaign.

The Mets dispatched the Astros in six games in the NLCS and then rallied to win the World Series over the Boston Red Sox in seven games.

1 In his first four starts against the Giants, Gooden pitched 33 innings, allowing three earned runs and 24 hits, with six walks and 49 strikeouts. He had two complete games, including a shutout.

3 Gooden also pitched only four innings against the Cincinnati Reds on July 9.

4 Gooden allowed six or more earned runs for only the fourth time in his 75 career starts to date.

6 Davis improved to 9-for-16 against Gooden lifetime, and his .563 batting average was the highest among players with a minimum of 10 at-bats. Davis also had drawn six walks for a .682 on-base percentage.

8 Krukow retired the first nine Mets he faced on June 1, making it a string of 32 consecutive New York batters who failed to get a hit off him. Krukow was 4-0 with a 1.73 ERA against the Mets in 1986. In 31⅓ innings pitched, he allowed six earned runs and 18 hits, with four walks and 16 strikeouts.