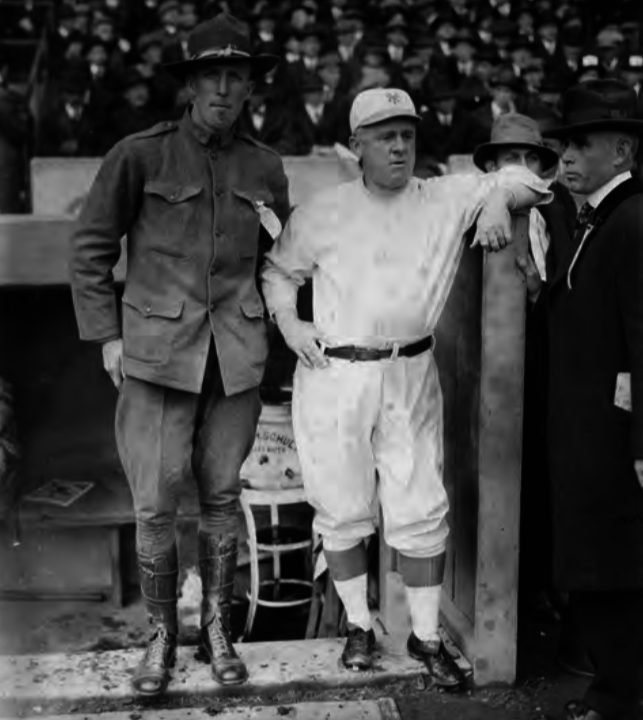 Welcoming back their popular soldier-catcher Hank Gowdy after nearly a two-year absence, the Boston Braves held a ceremony in his honor on Saturday afternoon, May 24, 1919, before a game against the Cincinnati Reds.1 Gowdy had been the first active major leaguer to enlist for military service in World War I. John Heydler, the president of the National League, came, as well as a delegation from Camp Devens, Massachusetts. The first 12 rows of the grandstand behind the Braves dugout were reserved for special guests. Gowdy was admired by fans across the country and “Gowdy Days” were planned in other National League cities, including Cincinnati, Chicago, and St. Louis.2

Before his heroics on the battlefield, Gowdy was a hero on the diamond. He was one of the stars as the Miracle Braves swept Connie Mack’s heavily favored Philadelphia Athletics in the 1914 World Series. Gowdy had six hits and five walks in 16 plate appearances. With the Braves down by two runs in the bottom of the 10th inning of Game Three, he started a rally by hitting the Series’ only home run.3 The Braves tied the game later in the inning. In the bottom of the 12th inning Gowdy led off with a double and was replaced for a pinch-runner, who eventually scored the game-winner.4

Amid growing tensions, on April 2, 1917, President Wilson asked Congress to declare war on Germany and provide for an initial 500,000 men in military service. War was declared on April 6. On June 1, the Braves game in Cincinnati was rained out, and Gowdy took the opportunity to take the train to his hometown of Columbus, Ohio, and enlist in the Army.5 (He joined the Ohio National Guard because he wanted to fight alongside men he was raised with.6) Gowdy was 27, in the prime of his career, and he chose not to wait and register for the draft, forgoing his salary.7

On June 22 Gowdy played his last game at Braves Field (a 5-3 victory over the eventual pennant-winning New York Giants) before going into the Army. Gowdy played in five more games in Brooklyn before leaving the team.8

National League President Tener lobbied for Organized Baseball to honor Gowdy. In an article in Baseball Magazine, Tener wrote, “Gowdy was neither a fading veteran nor an untried busher. He was a player in his prime. He occupied a position of great responsibility on an important club. He enjoyed the benefits of a good salary, the protection of a favorable contract. A single season in the army might ruin his subsequent career as a player. Hank Gowdy knew all this. But he didn’t hesitate.”9

After Gowdy enlisted, Braves teammate Johnny Evers, who waited until he was drafted to go into the service, said Hank’s decision not to wait for the draft surprised his teammates and manager George Stallings. “He claimed he was going and he went,” Evers said. “Nobody in the club thought he would pull up stakes quite so soon. George Stallings wouldn’t believe him when he said he planned to leave last night. But just the same he packed up his things and took the evening train for his home in Columbus. I was in the lobby as he passed out and he waved his hand to us and called out, ‘So long boys I’ll meet you in Paris.’ You would have thought, from the way he acted, that he was going to a party. Now this war is a pretty serious business. I guess my attitude toward it is about that of the majority. If my services are needed on the firing line I am ready to go. But I doubt if I would go the same as Hank Gowdy did, as if I was off for a lark. I don’t think I am any more of a coward than the next man. But facing bands and crowds clapping in the galleries is one thing and facing machine guns is another. I would go all right if I was called but I wouldn’t feel as if I were off for a matinee show, or act as if I did. So I will have to hand it to Gowdy for having more sand than I have when it comes to a show down.”10 Evers and 13 other 1917 teammates eventually followed Gowdy into military service.11

Gowdy himself explained why he had volunteered: “I had no excuse so far as I could see, for not offering my services. The government had shown, by passing the draft law, that they needed several hundred thousand men. I was of the proper age, well and strong, with no physical disabilities that I know of, with no one dependent upon me for support. I have no criticism for those who wait for the draft but I didn’t like the idea myself. I could offer my services without hesitation but I didn’t like to feel that I was forced to go. This is a matter that everybody has to decide for himself and I decided for myself that I would enlist. I do not know and I don’t believe anyone else does, how long this war will last. If it proves to be a longtime contract on my part, why, I want to go to France to do my bit. I wouldn’t feel content to stay on this side of the Atlantic in comparative security and know that others were bearing the brunt across the ocean. I don’t like to be a target for shrapnel any better than the next man. But that isn’t a subject that it does much good to speculate about. Somebody has got to fight and I don’t see how I could consistently fail to do my share.”12

Gowdy served in the 42nd “Rainbow” Division. He saw combat in the Battles of Chateau Thierry, Saint Mihiel, and the Argonne as a color sergeant.13

The May 24, 1919, game was Gowdy’s first after returning from the service. More than 16,000 fans, turned out to honor him. During the pregame ceremony, he was presented with gifts by Boston Mayor Andrew J. Peters, including: a gold watch and chain, a cigar cutter and $600 in Victory Bonds. Rabbit Maranville and Pat Moran presented Gowdy a trunk full of clothes from his teammates.

A bronze tablet was unveiled that would be placed on the first pillar of the administration building where it would be seen by the fans as they approached Braves Field. At the top of the tablet was the Braves insignia flanked by the years 1917 and 1919. Underneath was a caption reading, “Honor Roll Boston Braves Who Served in the Great War” and below were the names of the 14 Braves who were on the club’s roster when they entered the service, including Gowdy; Willard J. McGraw, who died in the service; and Arthur Rico, who died shortly after his discharge from the Navy.14

Hank Gowdy wasn’t the only person honored that day at Braves Field. Pat Moran, the first-year Cincinnati Reds manager, was from Fitchburg, Massachusetts, and a trainload of his friends came. They sat sit in a section reserved for them behind the Reds bench.

Fittingly enough, Art Nehf, who had pitched in Gowdy’s last home appearance before he went to war, was on the mound on the 24th, and, as before, pitched a complete game as the Braves defeated the Reds, 4-1. After Nehf threw the first pitch of the game, Gowdy handed the ball to umpire Cy Rigler. Rigler handed it to Braves pitcher Dick Rudolph, who presented it to Mayor Peters as a souvenir. Gowdy was greeted by cheers when he came to bat for the first time in the second inning, and he delivered a groundball single to right field on the first pitch to him.15

When the United States entered World War II, Gowdy enlisted and served as a major and recreation director at Fort Benning, Georgia. He trained soldiers on a baseball field that had been dedicated to him in 1925. He may have been the only active major leaguer to serve in both World Wars, first as a player and then as a coach.16 Gowdy returned to Braves Field on June 2, 1951, to be honored with his surviving 1914 teammates at a ceremony marking the 75th anniversary of the National League.

3 This was the first extra-inning home run in World Series history.