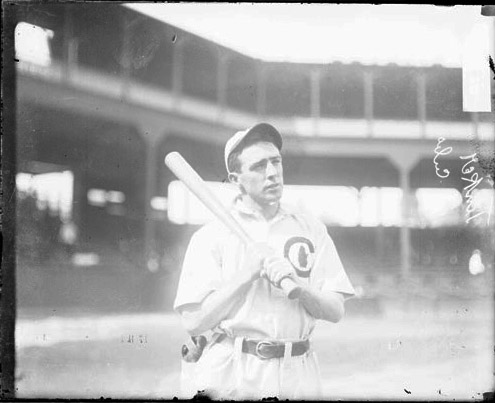 By the time the Cubs and Giants renewed their rivalry in 1908, it looked as though the Giants might not be a factor in the pennant race, or even in the rivalry. The Giants arrived at the West Side Grounds in late May in the midst of a miserable 20-game road trip. They had gone 3-8 on the trip so far to plunge them below .500 and into a tie for fifth place in the National League. “The Giants are dead, as far as New Yorkers are concerned,” wrote The Sporting News, “and they’ll never come to life again.”1

The Cubs, comfortably in first place after five wins in their last six games, were looking to validate player-manager Frank Chance’s preseason prediction: “I do not see how New York can beat us. The campaign in the National League will be just as easy as it was last year.”2

Even the mighty Christy Mathewson hadn’t been able to keep the Giants afloat in May. After he suffered three bad losses in a single week, The Sporting News said other teams “believed he has seen his best days, and that he would not prove a great star this year.”3 Mathewson, of whom one sportswriter had said, “He talks like a Harvard graduate, looks like an actor, acts like a businessman and impresses you as an all-around gentleman,”4 didn’t stir fear in the hearts of Cubs fans. They still relished the memory of a game back in 1906 when the Cubs lashed Mathewson for nine runs in the first inning and won 19-0. Ever since they had taunted him with cheers of “Nineteen! Nineteen!”5

Mathewson’s first start against the Cubs in 1908 came in the second game of a four-game series, in front of an overflow crowd at the West Side Grounds on a soggy Sunday afternoon. “It rained before, during, and after the game, but never quite hard enough to stop play,” wrote the Chicago Tribune. “Things were slippery and sloppy.”6

The Giants got the Cubs’ attention in the series opener by beating them 6-4. On Sunday, the Giants took a 1-0 lead in the top of the first inning after Fred Tenney reached on a fielder’s choice, advanced to third on an error, and scored on Cy Seymour’s sacrifice fly.7 The Cubs struck back in the bottom of the first on an inside-the-park home run by Frank Schulte. “There was nothing doubtful about Schulte’s home run from the instant it left his bat,” wrote the Tribune.8 “Frank scored before they got the ball back to the infield.”9 The blast scored Johnny Evers and gave the Cubs the lead, 2-1.

In the top of the second, irascible Giants manager John McGraw — who Giants base coach Arlie Latham once said “eats gunpowder every morning and washes it down with warm blood”10 — started arguing with umpire Bob Emslie over a foul call. McGraw “filled the air and the ears of a portion of the spectators with choice selections from his famous repertory of vilification,” according to the Tribune.11 Finally, McGraw turned to the crowd and loudly asked if anyone had a hairpin for Emslie’s toupee. “[F]or [that] piece of witticism,” wrote the New York Times, “he was put out of the grounds, amid the jeers of the spectators.”12

In the bottom of the second, the Cubs poured it on. Chance doubled with the bases loaded to bring home three Cubs and open up a 5-1 lead. Chance was then thrown out at the plate on a relay from first after Harry Steinfeldt reached base on an infield single. The inning was over, but after he gave upfive runs on seven hits in just two innings, Mathewson’s day was done.

Minus their skipper and their ace, the Giants nonetheless answered the Cubs forcefully in the third. They pounded Cubs starter Jack Pfeister, with hits by four of the first five batters in the inning to score three runs and narrow the Cubs’ lead to 5-4. Now it was Pfeister’s turn to bow out. Chance called on Mordecai “Three Finger” Brown to get the Cubs out of the inning. Brown came in and unleashed a wild pitch that allowed the Giants’ Tom Needham to advance to third. But Art Devlin ripped a line drive to Cubs shortstop Joe Tinker, who caught it on the fly and doubled up Needham at third to end the inning.

In the bottom of the third the Giants howled in protest when Pat Moran batted in front of Tinker. Tinker had batted before Moran in the first, and Moran led off the second. Emslie checked the scorecard and said the Cubs were in the right order now and it was too late to penalize them for batting in the wrong order before.13

“If the Giants had noticed it they could have prevented those three Cub runs [in the second inning], but the rule is not retroactive,” explained the Tribune. (Moran could have been penalized for the first out of the second inning, rather than reaching base and becoming the first of three runs to score with two outs.) “The opposing team loses the right to claim an out when the pitcher delivers a ball to the succeeding batsman.”14

“So much happened in the early rounds that it required an even hour to play three innings,” wrote the Tribune.15 But Brown and Giants pitcher Bill Malarkey stabilized the game through the middle innings. The score remained 5-4 after six innings.

Brown thought he had completed a scoreless seventh, too, after a Schulte throw to home plate on a single by Spike Shannon appeared to beat runner Al Bridwell for the third out. Bridwell successfully evaded Cubs catcher Moran, but Moran claimed Bridwell never touched home plate, and tagged him while arguing his point. But Bridwell was safe and the game was tied. Then Tenney singled and Mike Donlin doubled to drive in two more runs, and the Giants took the lead, 7-5.16

Once again the Cubs answered the Giants in the bottom of the inning. Evers led off with a walk, and scored on a single by Schulte. Then Steinfeldt doubled to score Schulte, and again the game was tied.

Hooks Wiltse came in to pitch for the Giants, and he and Brown each pitched two scoreless frames to send the game to extra innings. The sky darkened as the weather worsened.

But as the Tribune put it, “When it was too dark to go much farther the finish came with a rush.”17 In the bottom of the 10th, Jimmy Slagle walked and Moran moved him into scoring position on a sacrifice bunt. That brought up Tinker. He blasted a Wiltse offering into center field, over Seymour.

“Cy Seymour saw something go over, past, and beyond,” wrote the Chicago Journal. “The ball is alleged to be going yet, but this is probably an exaggeration.”18

“When Joe Tinker picked one of Wiltse’s curves out of the gloom and sent it back on a line into the darkness of center field in the tenth inning of yesterday’s battle with the Giants, he put an end to a reign of chaos, for that dark swat brought home the run which gave the Cubs the right end of an 8 to 7 score in their first overtime game this year,” wrote the Tribune.19 “Each team won and lost the game a couple of times and had opportunities to win and lose it half a dozen more,” the Tribune noted. “[I]f the battle had lasted ten minutes longer it would have been stopped by combined rain and darkness.”20

The Chicago Journal raved about the wild back-and-forth battle between the two teams that had combined for the last four National League pennants.

“There have been ball games and then some, but such a game as yesterday’s struggle doesn’t happen often. Exciting? Beyond the limit of deliriums. Ten innings of the wildest, fiercest battling; five pitchers beaten to a lemon meringue; batting and fielding feats of every variety, and the right people winning just as darkness settled down — how could you tie that combination?”21

The Cubs’ walkoff win allowed them to salvage their pride after losing the series opener. But it would be the only game they would win in the four-game series against their supposedly languishing rivals. “The near sweep of the Cubs on New York’s first Western trip rejuvenated the Giants, who were hovering near mediocrity,” wrote David Anderson.22 The Giants would pull themselves back into what would be a pennant race for the ages — one that reached its climax with one of the most infamous finishes in sports history: a controversial tie with the Cubs in the closing weeks of the season that forced the rivals into a one-game playoff.

8 “Notes of the Cubs,” Chicago Tribune.

10 The fact that this was the second inning is attested by Murphy, 86. The Latham quote was found in Deford, but was attributed to an umpire. Its attribution to Latham is found in various sources including Robert Weintraub, The House That Ruth Built: A New Stadium, the First Yankees Championship, and the Redemption of 1923 (New York: Little, Brown, 2011), 77.

13 “Notes of the Cubs,” Chicago Tribune.

22 David Anderson, More ThanMerkle: A History of the Best and Most Exciting Baseball Season in Human History (Lincoln, Nebraska: University of Nebraska Press, 2003), 121.