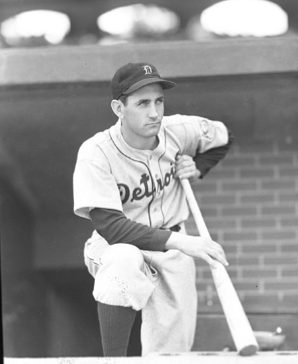 On May 12, 1939, the St. Louis Browns hosted the Detroit Tigers for the first of a four-game series but lost 1-0. After the Browns won the second game of the series, 5-3, on May 13, the two teams participated in a 10-man trade, sending players to the opposing dugouts for a doubleheader on May 14. Detroit traded Beau Bell, Bobo Newsom, Red Kress, and Jim Walkup to the Browns, in exchange for Vern Kennedy, Bob Harris, George Gill, Roxie Lawson, Chet Laabs, and Mark Christman.

The next meeting for the two teams took place at Detroit’s Briggs Stadium on May 27. A crowd of 17,345 showed for the scheduled doubleheader, to watch the bottom dwellers in the American League play ball (the Tigers at 12-21 were a half-game above the Browns at 11-21). The second game was “rained out after three and a half innings of play with the Tigers leading, 4 to 3.”1 However, the first game featured an 18-hit attack by the home team. Detroit won easily, 12-5, in a game that also featured second baseman Charlie Gehringer hitting for the cycle.

Vern Kennedy, the former Tiger, was given the start for St. Louis. He had split two decisions since joining the Browns. Tommy Bridges got the nod for the Tigers. After winning his first five starts of the season (all with complete games), he had lost his next start, yielding five runs in six innings pitched.

Tommy Thompson led off the game with a home run, a booming shot into the upper deck of the right-field stands, giving the Browns a 1-0 lead. It was Thompson’s first home run of the season (and only one for the year).2 Detroit matched that run in the home half of the first when Barney McCosky singled and stole second. He moved to third on Dixie Walker’s infield out and scored on Gehringer’s single.

St. Louis scored again in the second, when Billy Sullivan homered with one out, his third of the season. Bridges had yielded two hits, both home runs.

Detroit took the lead in the bottom of the third. McCosky and Walker started things with back-to-back singles, placing runners on the corners. Gehringer pulled a grounder to the right side, and McCosky scored on the out. Hank Greenberg followed with an RBI double and then scored on Bell’s single. Kress hit into a 5-4-3 double play to end the threat, but three Tigers runners had crossed the plate.

Billy Rogell tripled to lead off the Detroit fourth, and Birdie Tebbetts’s sacrifice fly to left brought Rogell home. In the next inning, St. Louis mounted a rally when Thompson singled and Mel Mazzera walked with one out, but they had to settle for only one run. (Myril Hoag singled in Thompson, but Bridges worked out of the jam.) Again, Detroit matched the run in its turn at bat. Walker singled, Gehringer doubled, and Greenberg was intentionally walked to load the bases with no outs. Bell stroked a two-run single, with Greenberg advancing to third on the play. Kress flied out to left, but it was deep enough to allow Greenberg to tag and score. Rogell drew a free pass, and by the time Browns manager Fred Haney strode to the mound and removed Kennedy “to a place of safety,”3 calling in Bill Trotter to relieve his starter, Detroit had blasted the former teammate for eight runs and 11 hits. All of the runs were earned.

Gehringer was in his 16th season, all played with Detroit. He accounted for the next three Tigers tallies. In the sixth, his triple drove in McCosky and Walker, and two innings later he swatted a two-out solo home run, upping the Detroit advantage to 11-3. More importantly, that round-tripper meant that Gehringer had just hit for the cycle. A subsequent trio of singles by Greenberg, Bell, and Frank Croucher gave the Tigers their 12th run of the game.

Bridges was still pitching for Detroit when the ninth inning arrived, having allowed only three runs on just six hits. The Browns tried one last push. Don Heffner singled to lead off. After striking out Hal Spindel, Bridges walked Thompson. Mazzera forced Thompson at second base for the second out. With runners at first and third, George McQuinn singled. Heffner trotted home easily, and Mazzera raced around the bags, scoring from first base on he single. Bridges retired Hoag to end the game, and the Tigers has defeated the Browns, 12-5.

The win elevated the Tigers into sixth place in the American League. Bridges pitched a complete game, raising his record to 6-1. He finished the year with a 17-7 record. Kennedy took the loss. He also lost seven of his next 10 decisions.

In 1929 Gehringer had led the American League in hits (215), doubles (45), and triples (19).4 He added 13 home runs that year, too, but he had not gotten all four different hits together. Ten seasons later, he collected the single, double, triple, and home run in the same game for the only time in his Hall of Fame career. By getting the hits in order of total bases, Gehringer had hit for a natural cycle.

With his 4-for-5 performance, Gehringer raised his batting average from .296 to .315; his slugging percentage jumped 56 points to .592. After the game, he told reporters, “I knew I had to hit a homer to get a round-robin, and I really teed off on that one,”5 driving the ball into the right-field stands.

In the second game of the scheduled doubleheader, Gehringer lost his ninth homer of the season, when the downpour arrived and the game was rained out. That shot had been a liner into the left-field stands in the third inning.6

Gehringer became the fourth Tigers player to hit for the cycle. The first was Bobby Veach, who shared his fame with George Burns on September 17, 1920. This was the first time in history that two batters had hit for the cycle on the same day (although for different teams and in different games).7 Veach hit for the cycle against the Boston Red Sox while the New York Giants’ Burns did so against the Pittsburgh Pirates. The second Tigers player to hit for the cycle was Bob Fothergill, who accomplished a natural cycle on the last day of the 1926 season (September 26), against the Red Sox. The third was Gee Walker, who on April 20, 1937 “did his hitting in reverse, starting with a home run and going down the line to his single”8 against the Cleveland Indians. Walker’s cycle occurred on Opening Day. So, the first four cycles in Detroit history were noteworthy: two natural cycles, a reverse natural cycle and one of two cycles accomplished on the same day! Plus, one of them was on Opening Day and another on the final day of a season.

Gehringer’s feat was the second time in 1939 that a player had hit for the cycle, following the Philadelphia Athletics’ Sam Chapman (May 5 against the Browns). Pittsburgh’s Arky Vaughan added the third cycle of the season on July 19 against the New York Giants. Vaughan’s accomplishment was also a reverse natural cycle.

2 Thompson hit a total of nine home runs in his six-year career. This was his first homer since the 1936 season.

4 Only one player in history has led the league in all three extra-base-hit categories in the same season: Tip O’Neill in 1887 belted 14 home runs, 19 triples, and 52 doubles.