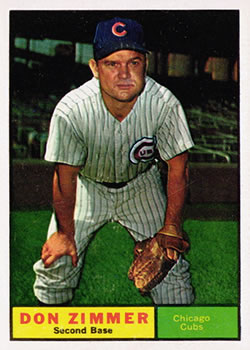 On April 8, 1960, the Los Angeles Dodgers traded infielder Don Zimmer to the Chicago Cubs for three minor leaguers and $25,000. Just four days later, on Opening Day, Zimmer hit a home run off Don Drysdale at the Los Angeles Coliseum in his first at-bat against his former team. After the home run, Zimmer began to struggle, and by the time the Dodgers and Cubs met in the Windy City in late May, he was hitting just .189 for the season. Since the Opening Day home run, he had gone hitless in 13 at-bats against the Dodgers. Zimmer seemed like an unlikely hero entering the second game of a three-game series against the Dodgers at Wrigley Field.

After taking game one of the series, the defending World Series champion Dodgers sent lefty Sandy Koufax to the mound to try to extend their five-game winning streak. Koufax had started the season slowly, winning just one of five starts, with the win being a dominant complete-game one-hitter in his previous start, against the Pirates. However, it didn’t seem that it was meant to be Koufax’s day as he began warming up to take the Wrigley Field mound. Dodgers manager Walter Alston later told the Los Angeles Times, “Sandy couldn’t get loose warming up, and I was about ready to call on Ed Rakow.”1 Koufax was eventually able to get himself ready to pitch and he delivered a memorable performance.

Koufax struggled to find his control in the early going. After he walked a pair of Cubs in the first, Frank Thomas grounded a single up the middle to score George Altman and give the Cubs the lead, 1-0. The Dodgers were able to score in the third and sixth innings off rookie left-hander Dick Ellsworth. In the third, Maury Wills reached when Ernie Banks was unable to throw the speedster out from deep in the hole at short. Wills stole second and scored on Jim Gilliam’s double into the left-field corner. Gilliam then swiped third and scored on a Tommy Davis single to put Los Angeles ahead, 2-1. The Dodgers added to their lead in the sixth when Davis circled the bases after hitting one into the right-field gap. The official scorer ruled the play a triple, and charged an error to center fielder Richie Ashburn on his errant throw to the cutoff man.

The Cubs were able to scratch out a run off Koufax in the sixth inning with nary a hit. After walking two batters, Koufax induced Ernie Banks to hit into what looked like an inning-ending double play, but second baseman Charlie Neal’s relay to first sailed past Gil Hodges and into the visitors’ dugout, scoring Ashburn and cutting the Dodgers lead to 3-2.

Ellsworth and Koufax battled through a classic pitchers’ duel. Ellsworth had allowed only three runs on six hits when he was lifted in the eighth inning for a pinch-hitter, while Koufax continued to dominate Cubs hitters as the game wore into its latter stages. He steamrolled into the ninth inning having allowed only two hits, Frank Thomas’s run-scoring single in the first and a harmless second-inning single by Jerry Kindall.

Koufax started the ninth by making Ed Bouchee his 10th strikeout of the game and then getting Ernie Banks to fly out to right field. With the Cubs down to their last out, Frank Thomas, who had one of Chicago’s two hits off Koufax, stepped to the plate. As the Chicago American described it, “His first pitch to Thomas was a strike, and then bingo! Thomas drove Sandy’s second serve onto the left-field catwalk for a score-tying homer.”2 The Los Angeles Times bemoaned Thomas’s success against Koufax, writing, “Here’s a guy who had a two-hitter going until Thomas, a .130 sticker against the Dodgers this season, came through with the crusher.”3 Thomas’s eighth homer of the year knotted the game, 3-3. After Earl Averill reached on an error by left fielder Tommy Davis, Koufax struck out Don Zimmer for his 11th strikeout and sent the game to extra innings.

Chicago had a bit of a rally in the 10th, when Koufax walked two batters, one of them intentionally, but Jerry Kindall was thrown out attempting to steal third for the second out, and Walt Moryn grounded out to first baseman Gil Hodges to end the inning. Despite the fact that he threw 132 pitches through nine innings, Koufax continued to dominate in the extra frames. The Chicago Tribune wrote that he “breezed through the 11th, 12th, and 13th without the challenge of a baserunner, he struck out four in that time — evidence that he still was strong.”4 But the Cubs bullpen matched Koufax’s brilliance. Seth Morehead pitched a hitless ninth and 10th, and Don Elston came in to start the 11th and shut out the Dodgers for four innings.

Having thrown 182 pitches, Koufax finally began to show signs of tiring at the start of the 14th inning.5 He walked Ed Bouchee to start the frame for his eighth walk of the game, causing Dodgers manager Walter Alston to make a mound visit. Alston decided to leave his young lefty in the game to face Cubs slugger Ernie Banks. Koufax walked Banks on four pitches, to put runners at first and second with no outs. With Frank Thomas, who had two of the Cubs’ three hits, including the game-tying home run in the ninth, looming on deck, Alston removed Koufax after an amazing 193 pitches. Koufax had allowed only three hits, while recording 15 strikeouts with nine walks. He received a standing ovation from the Wrigley Field faithful as he strolled to the dugout.

Koufax was replaced by right-handed reliever Ed Roebuck. The first hitter to face Roebuck, Frank Thomas, whiffed on a failed bunt attempt, allowing Dodgers catcher Johnny Roseboro to fire the ball to second base and catching Ed Bouchee too far off the bag. So Bouchee made “the only good reaction he could,” according to Cubs manager Lou Boudreau, and took off for third base, sliding in just ahead of the relay.6 Roebuck then gave Thomas an intentional pass to load the bases on three walks. With the infield and outfield playing in to try to cut off the game-winning run at the plate, Earl Averill lined out to left fielder Tommy Davis for the first out, and the runners held.

Up to the plate stepped Don Zimmer, or as the Chicago American called him, “a Dodger discard.”7 Zimmer, now hitless in 17 at-bats against the Dodgers since his Opening Day home run, was facing his longtime friend, pitcher Ed Roebuck. The two had been roommates while coming up through the Dodgers farm system and had also played winter ball together. They were such close friends that they were married on the same day when they played for the Elmira Pioneers. The two pals wanted to have a dual wedding ceremony at home plate, but since Roebuck was Catholic, he and his bride eventually decided to be married in a church, while the Zimmers were married at the Elmira ballpark.8 Now they faced each other with the game hanging in the balance.

Zimmer hit the first ball he saw from his old friend and sent it slicing down the right-field line. The Chicago Tribune reported that the “well hit fly … was out of Frank Howard’s range — a drive that would have been a double if the Cubs had needed it.”9 The Wrigley Field crowd, 13,605 strong, celebrated as Ed Bouchee crossed the plate with the winning run.

It took the Cubs fourteen innings to get their fourth hit of the game, but it was just enough. In the end, a game that had been dominated by Sandy Koufax came down to a pair of old buddies, Ed Roebuck and Don Zimmer, with the “Dodger discard” getting the best of his old pal.

In addition to the sources cited in the Notes, the author also accessed BaseballReference.com, Retrosheet.org, SABR.org, and The Sporting News archive via Paper of Record.

5 None of the newspaper articles from the game tell Koufax’s pitch count, so all pitch count references are from Baseball-Reference.com’s game logs at baseball-reference.com/boxes/CHN/CHN196005280.shtml .