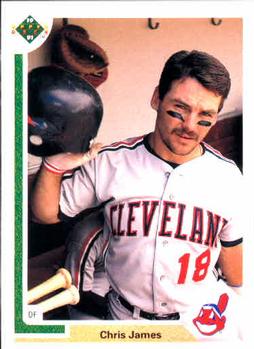 Cleveland Indians fans may have to pause a bit when asked to name the three players who were received in the Joe Carter trade on December 6, 1989. Sandy Alomar Jr., of course, he was the American League Rookie of the Year in 1990. Then there was Carlos Baerga. The fireplug at third base who could hit a ton. He eventually moved over to second base and became a three-time All-Star. Now, who was that third player the Tribe got?

Chris James may not have had all the trappings and glory of Alomar and Baerga, but for one game, he was the player who would enter the Indians record book after a stellar afternoon.

Because of the bounty they received for Carter, Tribe fans were hopeful that the franchise was finally turning the corner and producing a competitive team. A fourth-place finish in the American League East was partly the reason for this newfound enthusiasm.

As for the Athletics, they were kings of the mountain in the AL; they won the pennant three years in a row (1988-1990) and won one World Series championship (1989). However, the A’s organization and their fans were still smarting from a World Series sweep at the hands of Cincinnati in 1990. It remains one of the biggest upsets in the history of the fall classic.

In early May of 1991 season, the Indians were on an eight-game Western swing through Texas, Anaheim and Oakland. Thus far they were 3-2 on the trip when they landed in Oakland for a three-game weekend series on May 2-4 before heading home.

The opener was quite a game, as the Tribe and A’s battled to a 2-2 tie through nine innings. Cleveland took a 3-2 lead in the top of the 11th, but a double by Terry Steinbach in the home half of the inning knocked in two runs and the Athletics prevailed, 4-3.

In the second game of the series, Cleveland manager John McNamara sent right-hander Eric King (2-2, 4.55 ERA) to the mound. King had been acquired in the offseason with pitcher Shawn Hillegas for outfielder Cory Snyder and minor leaguer Lindsay Foster.

Mike Huff led off the game with a walk but then was picked off first by Dressendorfer. However, the young hurler apparently had a fondness for the free pass: He walked the number-two hitter, Mark Lewis. Beau Allred singled to right field to put runners on first and second. A wild pitch advanced Lewis to third base, but Albert Belle popped out to third for the second out. Up stepped James, and he lined a fastball from Dressendorfer over the left-field wall to give the Indians a 3-0 first-inning lead. It was James’s second homer of the year.

Oakland got a run back in the bottom of the inning on singles by Walt Weiss and Jose Canseco and a groundout by Harold Baines.

The floodgates opened in the top of the second inning when Cleveland scored five runs to take an 8-1 lead. Errors by third baseman Ernest Riles and first baseman Mark McGwire helped make four of the runs unearned. The big blow of the inning was another three-run homer by James, giving him a career high six RBIs. He didn’t take the bat off his shoulder in the at-bat as the count ran full, then swung on 3-and-2 and deposited a hanging curveball over the left-field wall.

After giving up consecutive singles to Huff and Lewis to lead off the fourth inning, Dressendorfer was through for the day. La Russa brought in veteran Curt Young. Another error by Riles scored Huff and James singled to bring home the second run of the inning, and the Indians’ advantage swelled to 10-1.

If there was any doubt as to the outcome of the game, Cleveland put that to rest with eight runs in the top of the eighth. The Indians had eight hits in the frame. Jerry Browne contributed a double and a triple, and Belle and Baerga also doubled. James hit a two-run single to left field off reliever Eric Show and put his name into the Indians record book for the most RBIs in a game, nine. “I didn’t even know about the record until someone told me after the game in the clubhouse,” James said. “But this is a big morale boost for a young team like ours.”1

The final score was Cleveland 20, Oakland 6. King got the win, going six innings, giving up five earned runs, walking two, and striking out three. “He wasn’t really sharp early, but he’s a professional and he battled,” McNamara said of King.2

“By far this is my best day ever,” James said. “In 1988, I had two home runs and drove in five runs for Philadelphia, but it was nothing compared to this. I guess the good Lord was just with me. I just got up and drove ’em in.”3

The Indians won the series the next day, drubbing Oakland again, 15-6. But that turned out to be the highlight for the Indians in 1991. McNamara was fired in early July, having gone 25-52. He was replaced by Mike Hargrove, who did not fare much better with a 32-53 mark.

For the Athletics, their reign of supremacy in the AL West was over. They finished in fourth place in the AL West with an 84-78 record, 11 games behind the first-place Minnesota Twins.

The author accessed Baseball-Reference.com and Retrosheet.org for box scores/play-by-play information, and other data: