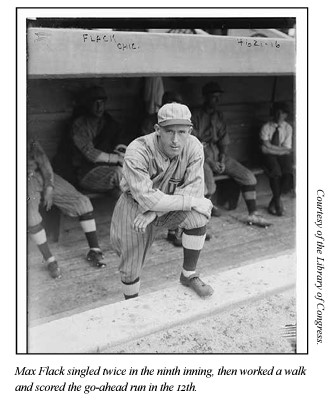 Things looked bleak for the Chicago Cubs in the top of the ninth inning against the Cincinnati Reds on May 5, 1919. They had made two Keystone Kops plays and they were down 6-0 and had only four hits. Ironically, a third Keystone Kops play by the Cubs in the ninth actually helped them tie up the game which they won in the 12th inning.

The home team had scored single runs in the first two innings and four more in the fifth inning. Actually, the first inning Cincinnati run was a pure Keystone Kops play. With two outs, Heinie Groh hit a routine fly to left field, where left fielder Turner Barber should have easily caught it. However, he did not shout “I’ve got it.” Thus center fielder Dode Paskert did not think it was going to be caught and also ran for it. When Paskert arrived, each thought the other would catch it and this apparent routine out fell for a double. A single by Edd Roush then drove Groh home.

Entering the ninth inning, Cincinnati pitcher Hod Eller had given up only four hits and walked only one batter: That batter was then erased in a double play. Shufflin’ Phil Douglas had given up six runs, but only three were earned; three of the runs in the fifth inning were unearned because of his error on a bunt. The Reds’ half of the fifth inning had opened with a Larry Kopf single: actually, he bunted safely to Douglas. Bill Rariden singled him to third base. Eller then singled and drove in Kopf as Rariden advanced to second. Then Morrie Rath bunted toward third base. Douglas had an easy force play on Rariden, but he threw the ball over Charlie Deal’s head at third base, and Rariden, Eller, and even Rath all scored.

Max Flack was first man up in the Cubs’ ninth inning and singled to left field. Charlie Hollocher doubled down the left-field line, sending Flack to third base. Turner Barber hit a grounder to Jake Daubert at first base that hit a stone or a chunk of dirt. Instead of being an easy out, or perhaps cutting down Flack trying to score, the ball bounced over the first baseman’s head.1 Flack scored easily and Hollocher went to third base. A long fly ball by Dode Paskert to Edd Roush in center field scored Hollocher, making the score 6-2. Fred Merkle then lined a double off the left-field wall, sending Barber to third base.

Charlie Pick singled to center, scoring Barber with the third run of the inning. Charlie Deal followed with a fly to short right-center field. Edd Roush dove for the ball but missed it. Instead of the ball being the second out of the inning, Merkle scored on the play to make it 6-4. Pick thought that Roush would catch the ball and delayed running to second base. Roush had lain there rolling on the center-field grass and it took several moments to determine that it had not been a catch. Greasy Neale in right field ran over, picked up the ball, and threw it to second, where Pick barely beat the throw. A physician who was in the stands was called to examine Roush.2 He determined that Roush’s shoulder was severely bruised and the center fielder had to leave the game, not to return to the lineup until May 14. He was replaced by Wally Rehg. This was only Rehg’s second game played for Cincinnati, and after three more games, the last being May 10, he was gone from the major leagues.

Cubs manager Fred Mitchell replaced Deal with pinch-runner Bill McCabe. Bob O’Farrell batted for Bill Killefer. With McCabe on first base and Pick on second base, Mitchell ordered a double steal. Unfortunately, McCabe missed the sign, did not initially move, and finally ran to second.3 Reds catcher Bill Rariden did not try to nab Pick trying to steal third. He reasoned that if McCabe stole second, there would be two runners in scoring position. His throw to second surprised McCabe, who did not even try to slide and was an easy out – the second out of the inning. Pick reached third base (no stolen base).

However, this third Keystone Kops play actually helped the Cubs tie up the game. Greasy Neale in right field was playing very swallow to so that if a ball were hit past the infield, he could throw out Pick trying to score. Neale then moved further back to prevent O’Farrell from getting an extra base hit. Bob O’Farrell singled exactly where Neale had previously been standing and Pick’s run made it a 6-5 game. It was noted that not only would O’Farrell’s hit been caught, by Neale if he had not moved, but it might have resulted in a game ending double play.

Les Mann batted for Douglas and singled to right, sending O’Farrell to second. Manager Mitchell inserted Fred Lear to run for O’Farrell, who represented the tying run. (O’Farrell had only 35 stolen bases in his 21 major-league seasons.) Jimmy Ring replaced Eller on the mound for Cincinnati. (Ring later became the answer to a baseball trivia question as the man the New York Giants traded with Frankie Frisch to the St. Louis Cardinals for Rogers Hornsby after the 1926 season.)

Flack, batting for the second time in the inning, singled to left field. Sherry Magee’s throw home was too late and too wide to catch Lear at home. This was the sixth run of the inning and now the score was tied, 6-6, and the Cubs had Mann on third and Flack on second, having advanced on the throw. Hollocher was hit by a pitch, and the bases were loaded. Rube Bressler replaced Ring on the mound and retired pinch-hitter Pete Kilduff on a fly to left. Chicago had made nine hits, scored six runs to tie the game, and had left the bases loaded.

In the bottom of the ninth inning, Cubs manager Mitchell had Mann, who had batted for pitcher Douglas, go to left field. Tom Daly, the Cubs’ third-string catcher, replaced Lear, who had run for catcher O’Farrell after O’Farrell batted for catcher Killefer. Paul Carter went in to pitch. Kilduff, who batted for left fielder Barber, went to third base. Carter retired the Reds one-two-three; Magee grounded to second, Daubert grounded to third, and Larry Kopf flied to left.

The 10th and 11th innings were uneventful. But in the Cubs’ half of the 12th, Reds pitcher Rube Bressler walked Flack and Hollocher sacrificed him to second. The next batter, Kilduff, singled to center and Flack scored to put the Cubs ahead for the first time in the game, 7-6. Bressler retired the next two batters on grounders to end Chicago’s half.

Chicago manager Mitchell did not want this game to be lost now. Thus he had Grover “Pete” Alexander go to the bullpen to warm up, in case Carter got into difficulty. In the bottom half of the inning, Magee flied to Paskert in center and Daubert fouled out to third baseman Kilduff. Cincinnati had some transient hope as Kopf reached first on an error by shortstop Hollocher. But Rariden flied out to Paskert, and the game was over. Pete was not needed.

Paul Carter was the winning pitcher and Rube Bressler the loser. The Cubs outhit the Reds 15 to 8. Since Eller went 19-9 that season, this game deprived him of a 20-win season. Cincinnati had won its first seven games of the season, lost one, and won two more for a 9-1 start. At the end of the day the Reds (9-2, .818) were in second place behind the Brooklyn Robins (7-1-1, .875) in percentage, but a half-game ahead of the Robins in the won-lost column. Chicago (6-4, .600) was in fourth place. With a roster almost identical to their 1918 pennant-winning team, they finished third, 21 games behind Cincinnati and 12 games behind the second-place New York Giants.

In this season, the first after World War I, only 140 games were scheduled. Ironically, the Cincinnati Post noted, “O’Farrell brought back the worry with a single and Mann’s single, which followed, cast real gloom over all except some gamblers who had bet on the Cubs, getting 8 to 5 for their jack.”4 Was this Cincinnati Chicago game in 1919 a harbinger of the Cincinnati Chicago World series for 1919?

In addition to the sources cited in the Notes, the author also consulted Retrosheet and acknowledges its help.