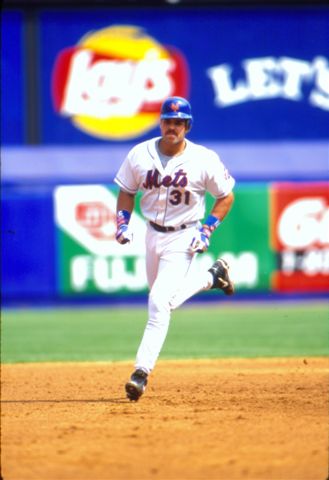 Mike Piazza had come a long way since 1988 when the Dodgers drafted him in the 62nd round of the June draft. He was only drafted when Dodgers manager Tommy Lasorda urged the team to take a chance on him at the request of Piazza’s father, who was a friend of Lasorda’s. At the time, Lasorda told the Dodgers: “If this guy stays healthy, he’ll break every existing record for catchers.”1

Eight days earlier, on April 27, Piazza had tied Carlton Fisk for the major-league record for home runs by a catcher. It was the 351st home run of his career and his third of the season while playing catcher. But Piazza had struggled at the plate since the , going 5-17 in the next six games. The Mets were hosting the San Francisco Giants at Shea Stadium. When they won the night before, Piazza had managed only a single; he had only five singles in the six games he played in after tying the record.

Jerome Williams was on the mound for the Giants. The sophomore pitcher entered the game with a 3-1 record. Williams got Kazuo Matsui and Todd Zeile to fly out in the bottom of the first inning for two quick outs. Then Piazza stepped to the plate. After building the count to 3-and-1, Piazza launched Williams’s next pitch over the right-field wall.2 He was now the major-league home-run leader for catchers.

The ball sailed over the fence and bounced off the large scoreboard. Piazza rounded the bases while the theme from The Natural played. The crowd rose to their feet in applause and Shea Stadium’s home-run apple rose to mark the event. As Piazza approached the dugout, the entire Mets team waited to congratulate him. When the crowd continued to roar their excitement, Piazza came back out for a curtain call. “I’m obviously very proud. I’m a little relieved, too,” he said after the game.3

The Giants tied the game in the second inning. Jeff Hammonds led off with a ground-rule off Mets starter Jae Weong Seo, and came home on Edgardo Alfonzo’s single.

The Mets wasted no time in regaining the lead in the bottom half of the inning. With one out, Williams walked Mike Cameron. Then he hit Daniel Garcia on the next pitch. Seo laid down a bunt in front of the mound. Williams fielded the ball but threw it away. Cameron scored and the Mets led 2-1.

The Giants tied the game again in the fifth inning. Neifi Perez led off with a double. Williams sacrificed him to third base. Mets manager Art Howe removed Seo and brought in Ricky Bottalico. Brian Dallimore hit Bottalico’s third pitch to deep left field and Perez tagged up to easily score the tying run.

The game stayed tied heading into the bottom of the eighth inning. Felix Rodriguez was now pitching for the Giants. He had retired the Mets in order in the seventh. After striking out Matsui in the eighth, Rodriguez gave up a single to Zeile. He got Piazza to fly out to center field, then was removed for Scott Eyre.

Jason Phillips walked on four pitches. Cameron then hit the Mets’ second home run of the inning, making the score 7-2.

David Aardsma replaced Herges for the Giants as they tried to get the final out of the inning. But Aardsma hit Daniel Garcia with a pitch and then gave up a single to Eric Valent. With runners on first and second, he gave up another single, to Matsui. Daniel Garcia scored to make it 8-2 before Aardsma finally got McEwing to line out to center field for the third out.

Howe brought in Orber Moreno to pitch the ninth inning and close out the game. He got the Giants out in order. Moreno threw just 13 pitches as the Mets won the second game of their series against the Giants and their third in a row.

But the real story of the game was Piazza’s first-inning home run. At the time, Piazza had begun playing some games at first base due to the punishing nature of catching on a daily . As of May 5, he had played seven out of 25 games at first base. When Piazza returned to the dugout after his home run, he even joked with his manager, “Get me to first base. I’m tired of catching.” Asked where Piazza would play in the future, Howe told reporters, “ ‘Mike’s a catcher first and a first baseman second.”4

After the game, Piazza received a phone call from Fisk, who congratulated him on breaking the record that he had held since 1993. In a statement he issued later, Fisk said, “When someone broke my home run mark, I was hoping it would be Mike.”5

Piazza’s memorable season did not end there. The next day he hit another home run to extend his record. This one came with two outs in the 11th inning, a walk-off round-tripper off Jim Brower for a 2-1 Mets victory. Piazza finished the 2004 season with 10 home runs while playing catcher.

During his career, Piazza was recognized numerous times for his work ethic. Doc Mainieri, his coach at Dade County Community College, remembers calling with Christmas greetings a few years after Piazza was playing with the Dodgers. His mother told Mainieri that she would have to get him since he was out in the batting cage. “Imagine that, on Christmas Eve, Mike is hitting in the batting cage and this is after he’s been in the majors for five years. He’s never stopped working to get better,” he said.6

The Mets recognized Piazza’s accomplishment on June 18. Hall of Famers Fisk, Johnny Bench, Yogi Berra, and Gary Carter were in attendance. Lasorda and Piazza’s father were also there to see the Mets present Piazza with the home plate that he crossed when he broke the record.7 “Everyone knows how difficult this is. I’m just proud to be part of this group. I’m so honored that they’ve all come here,” said Piazza before the game.8