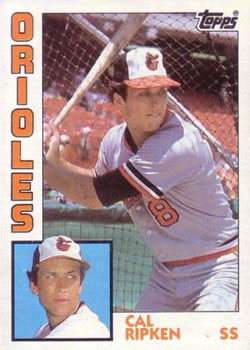 Believe it or not, Baltimore Orioles shortstop Cal Ripken Jr. had been in somewhat of a slump in the early part of the 1984 season. Although he started the season well, hitting safely in all but four of the Orioles’ first 23 games, in early May his batting average dropped from .352 on April 30 to .314 on May 5 as he experienced a 2-for-17 stretch. He admitted that he was “over-swinging for a while, and lately, I’ve been getting in a lot of two-strike situations. That’s good for me because it forces me to look at the ball.”1 Richard Justice wrote about Ripken’s breaking out of this so-called slump in the Baltimore Sun, saying, “Cal Ripken did the next best thing to visiting the Instructional League. He visited Texas.”2

Ripken was not supposed to be in a slump. He was the American League Rookie of the Year in 1982 and the American League’s Most Valuable Player in 1983. He led the Orioles to a World Series championship in 1983. In two seasons Ripken had “already done things that would paint the stained glass of Cooperstown, which is why on the team that has had its Robinsons and Palmers and Murray he may be the greatest ever.”3 So, on May 6, 1984, Ripken ended talks of a slump by hitting for the cycle and leading Baltimore to a 6-1 victory over the Texas Rangers. An Arlington Stadium crowd of 13,224 braved a muggy night at the ballpark to witness “what might have been history, but to Ripken, it was a day at the office.”4

The Orioles took a 2-0 lead in the second inning without getting a base hit. After Eddie Murray popped out to short, Gary Roenicke drew a walk. Ken Singleton reached on an error by shortstop Curt Wilkerson. Benny Ayala walked to load the bases with no outs. Todd Cruz lifted a fly ball to deep center field and George Wright dropped it; Roenicke and Singleton both raced home to score unearned runs. (Cruz was credited with a sacrifice fly.)

An inning later Rich Dauer led off with a single. Ripken tripled, driving in Dauer. After Tanana struck out Murray, Rader pulled the pitcher, bringing on Jim Bibby in relief. With Roenicke batting, Bibby was called for a balk, and Ripken trotted home with the Orioles’ fourth run of the game.

In the top of the fourth Jim Dwyer, who had replaced Ayala in the Baltimore outfieldin the bottom of the third, singled and took second on a sacrifice by Rick Dempsey. John Shelby singled, and Dwyer came around to score run number five.

Boddicker faced only 13 batters through the first four frames, allowing only a leadoff walk to Mickey Rivers in the first inning (he was immediately erased on a double play) and a double to Wilkerson in the third. Texas got a run in the fifth, when Ned Yost hit a two-out solo home run, his third homer of the season.

The Orioles started another rally in the sixth inning against Bibby. Singles by Singleton and Dwyer and a walk to Dempsey loaded the bases with one out. Dave Tobik replaced Bibby as the third Texas hurler and put out the fire. Shelby grounded a ball to first, and Rangers first baseman Pete O’Brien threw home to cut down Singleton at the plate. John Lowenstein, pinch-hitting for Dauer, struck out to end the inning.

After his third-inning triple, Ripken had led off the fifth with a single and the seventh with a double. Both times he was left on base by his teammates. The score remained 5-1 until the top of the ninth. After the game Ripken said that when he strolled to the plate in the ninth inning, he was not thinking about the cycle. “Maybe in the on-deck circle you think it’d be nice,” he said, “but when you get to the plate, you just think of hitting the ball hard.”5 And hit it hard he did, sending an offering by Tobik over the outfield wall. It was his ninth home run of the season. According to Ripken, “It rarely happens that you hit a home run when you’re trying to.”6

Ripken’s success marked a continuing breakout for the Orioles as well. After a 4-12 start to the season, this victory was their 10th win in their last 14 games (and their 9th in their last 10). They climbed from seventh place in the American League East (on April 27) to third place at 14-14. The Orioles had 11 hits against Texas, and the only three extra-base hits belonged to Ripken. Dwyer had a 2-for-3 game to help the Orioles’ cause.

Boddicker earned his second victory in five decisions with a masterful performance against the Rangers. He scattered five hits and struck out four in going the distance, lowering his ERA to 2.76. This was Boddicker’s second consecutive complete game. Baltimore played errorless ball behind him, their third straight game without an error.

Ripken talked to reporters after the game about his historic night in a somewhat humble manner. “I had been swinging at some bad pitches. What does it mean? It means four hits. Where they go is all luck.”7This was the sixth four-hit game of Ripken’s young career. He added, “I’ve never been close to hitting for the cycle in a game, not even in Little League. It just felt like I had some good hits today, and I felt very good at the plate.”8 The four hits in five at-bats raised Ripken’s average to .336 and increased his slugging percentage from .629 to .691.

With the 6-1 win, the Orioles handed the Rangers their fourth consecutive loss and the 11th in 12 games. Tanana took the loss for Texas, and his record fell to 2-4. After a two-day break in the schedule, Ripken went 4-for-8 in a doubleheader against Toronto, and his average shot up another 11 points to .347. The “slump” was gone.

In addition to the sources mentioned in the Notes, the author consulted Baseball-Reference.com, mlb.com, and Retrosheet.org. The author acknowledges the assistance of Meg Gers and the Enoch Pratt Free Library in obtaining sources from the Baltimore Sun.