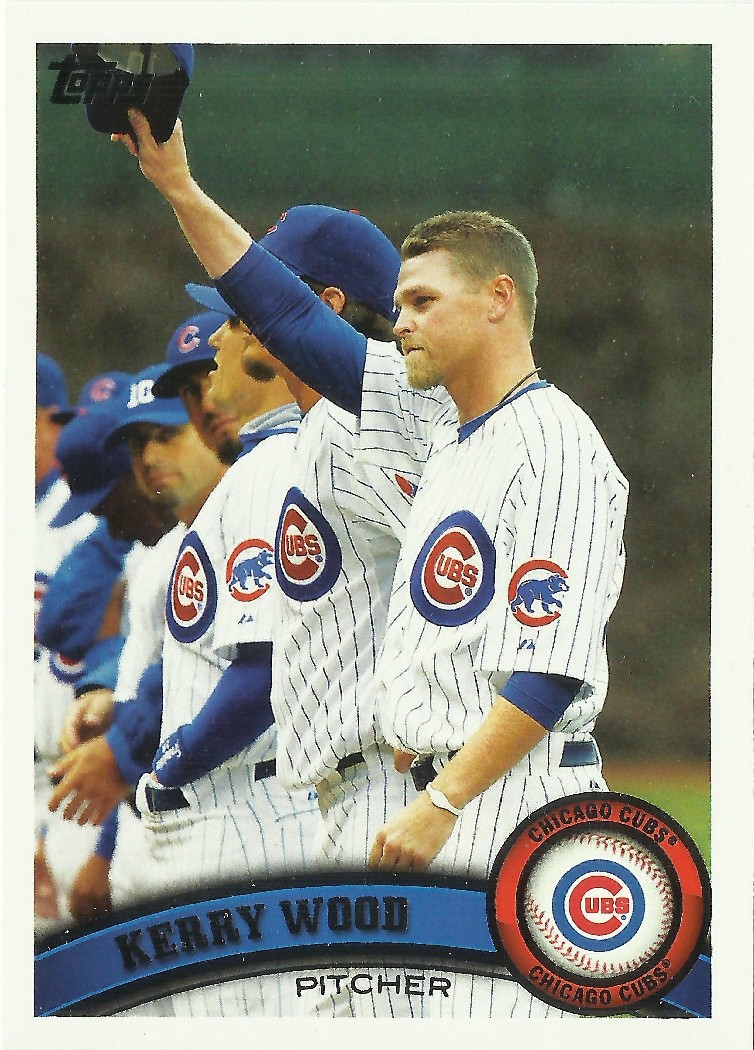 One of the great things about baseball is that fans never know when a game they attend might turn into a historic occasion. This fact was borne out in an early-season, afternoon game between the defending NL Central champion and front-running Houston Astros and the Chicago Cubs on a rainy day at Wrigley Field in 1998.

Cubs rookie Kerry Wood, a power pitcher who – like most young flamethrowers – had flashed both promise and wildness, was making his fifth start of the season against an Astros team that was “the second-most prolific scoring team in the National League.”1 In this game, however, the Astros would not only fail to add to their season run total but, for one day, they would be made to look like amateur hackers as Wood struck out 20 batters to tie the nine-inning major league record in one of the most dominant pitching performances in history.

Wood began the game by flashing his wild streak as his first pitch of the game to Craig Biggio sailed over catcher Sandy Martinez and hit home plate umpire Jerry Meals square in his facemask. It would be one of only two pitches that got away from Wood on this day, and he settled down immediately to strike out Biggio, Derek Bell, and Jeff Bagwell. Astros starter Shane Reynolds took the mound in the bottom of the first and matched Wood by striking out the Cubs in order: Brant Brown, Mickey Morandini, and Sammy Sosa all went down swinging.

In the second, Wood picked up where he had left off by striking out Jack Howell and Moises Alou to give him five consecutive strikeouts before Dave Clark ended his string by flying out to center field, one of only two balls hit against Wood that would leave the infield. Mark Grace led off the bottom of the second with a double that went under Howell’s glove at third base, and he advanced to third when Clark committed an error with a terrible throw from left field that got past Bagwell and went all the way to wall. Henry Rodriguez worked Reynolds for six pitches until he was able to drive in Grace with a sacrifice fly to give the Cubs a 1-0 lead. Reynolds acquitted himself more than admirably on this day, especially in the face of Wood’s overwhelming performance, and – had it not been for Clark’s error that set up the Cubs’s first, unearned run – would have taken a 0-0 tie to the bottom of the eighth, at which point he surrendered the only other run of the game.

It looked as though Reynolds and the Astros might regain a tie in the top of the third when Ricky Gutierrez led off the frame with a single off the glove of Cubs third baseman Kevin Orie. Gutierrez’s base hit would be the only hit surrendered by Wood, and the scoring call generated some controversy. Cubs broadcaster Chip Caray, who had taken over WGN television play-by-play for his legendary grandfather Harry Caray who had passed away in February of that year, said it was a clean hit and a good call. Still, there are others who assert that “[i]n the late innings of a no-hitter, it would have been scored an error, but not in the third inning.”2

After Brad Ausmus struck out swinging, Reynolds laid down a perfect sacrifice bunt to advance Gutierrez to second. With Biggio at the plate, Wood balked and Gutierrez advanced to third, but Biggio’s groundout ended the scoring threat. In the Cubs’s half of the inning, Reynolds alternated strikeouts with two singles and a walk and escaped a bases-loaded jam by striking out Rodriguez. Amazingly, at this point in the game Reynolds led Wood in strikeouts 7-6, but it was a pace that he would be unable to maintain.

Wood, on the other hand, took over the game and actually grew stronger as it progressed. He struck out five consecutive batters from the fourth through the fifth innings and registered another seven consecutive strikeouts from the seventh to the ninth. The only other blemish on his pitching line was a two-out hit-by-pitch against Biggio in the bottom of the sixth. Wood had such great command on the day that he did not walk a single batter in his nine-inning masterpiece.

While Reynolds ceased to match Wood in strikeouts, he allowed the Cubs only one additional run. In the bottom of the eighth, Morandini led off with a single and, two batters later, advanced to third on a single by Grace. Jose Hernandez, who had replaced Rodriguez in left field in the top of the eighth, hit a grounder that forced Grace at second but allowed Morandini to score and gave the Cubs the final 2-0 margin of victory.

The Cubs’s second run was superfluous as it had become obvious that the Astros were not going to score against Wood. The only question left as the game entered the ninth inning was whether or not Wood was going to break the major league record of 20 strikeouts in a nine-inning game that had been accomplished twice by Roger Clemens. Wood struck out Bill Spiers, who was pinch-hitting for Reynolds, to start the inning, which gave him a tie for the NL record of 19 strikeouts that was jointly held by Steve Carlton, Tom Seaver, and David Cone. The partisan Cubs crowd booed when Biggio grounded out because it meant that Wood could only tie Clemens’ record, which he proceeded to do by striking out Bell to end the game.

In the top of the ninth inning, WGN color broadcaster Steve Stone reported that legendary Cubs broadcaster Jack Brickhouse had called to say that this game was the most competitive pitching matchup he had seen since a September 9, 1965 Cubs-Dodgers game. In that game, the Cubs’s Bob Hendley had pitched a one-hitter and had given up only one unearned run. Unfortunately for Hendley, Sandy Koufax pitched the fourth no-hitter of his career against the Cubs that day for a 1-0 victory.

Similarly, on this day, Reynolds had pitched eight strong innings that included allowing eight hits, two runs – only one of which was earned – and two walks while striking out 10 batters. Given the Astros’s offense in 1998, that would likely have earned him the win in any other game, but his pitching line paled in comparison to that of Wood, who had allowed one hit, no runs, no walks, and had struck out 20 Astros.

Wood had struck out the side four times and had struck out two batters in three other innings; he had at least one strikeout in every inning. The Astros had begun the game by flailing away at Wood’s offerings; however, as the game progressed, they could not even get their bats off their shoulders anymore as Wood struck out five consecutive batters looking – Bagwell, Howell, Alou, Clark, and Gutierrez – from the fourth through fifth innings. In addition to owning the NL record and tying the MLB record with his 20 Ks, the 20-year old Wood became only the second major leaguer to match his age in strikeouts, joining Bob Feller who accomplished the feat as a 17-year old in 1936.3

As is to be expected on the heels of such a dominant performance, the superlatives came from all directions afterward. Cubs manager Jim Riggleman said, “There’s no one in the National League who has a better arm. That game was one for the memory banks. The best I’ve ever seen pitched by anybody.”4 Astros manager Larry Dierker, a former 20-game winner who also pitched a no-hitter during his playing career, agreed: “He reminded me of the first time I saw [Nolan] Ryan. … He’s going to pitch a no-hitter and maybe a few no-hitters. His stuff is the real item.”5

As for the hero of the hour, Wood said, “It felt like a game of catch out there. It was one of those games where everything you throw was crossing the plate. I was focused, though, so I had no idea how many guys I was striking out.”6

Every time I watch the broadcast video of this game, I am amazed by the movement that Kerry Wood had on his pitches that day. I am not a baseball insider, but as a lifelong fan who has watched many games, I have never seen another performance like it. The only thing comparable that I have seen was what my friends and I were able to do on our old Atari 2600 baseball game as kids. It is unfortunate that players suffer serious career-altering or career-ending injuries that make us have to ask, “What if…?” What might Wood’s career numbers have been if he had stayed healthy?