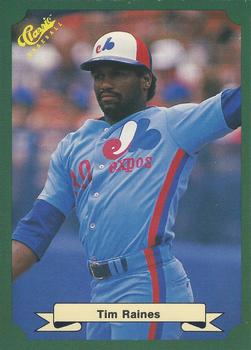 Tim Raines had put away his razor. He was riding an 11-game hit streak heading into the May 7 matchup with the Phillies, and he vowed to let the whiskers grow for as long as the streak continued.1 The 26-year-old Raines, already considered one of the best leadoff hitters of all time, was focused on more than just the stolen-base crown in 1986. Not only had he been working hard on improving his defense, but he had his eye on something that had eluded him thus far in his star-studded career.2 “I’d like to make a run at the batting title,” he said. “The stolen-base lead I don’t worry about until late in the season.”3

The Expos came into the Wednesday night series finale with Philadelphia having won four in a row and eight of their last 10. Their 13-10 record was good enough for second place, five games behind the white-hot New York Mets (17-4). The fourth-place Phillies, stumbling to a disappointing 2-5 mark on their current homestand, already trailed the Mets by 8½ games.

Philadelphia sent its ace, veteran left-hander Shane Rawley, to the mound in the hope that he would turn the tide. The former Expos farmhand had been solid in posting a 3-2 record and a 3.35 ERA in his first six starts of the year. Montreal countered with its inconsistent 21-year-old hurler Floyd Youmans, who continued to have problems finding the strike zone. He had been acquired from the New York Mets along with Hubie Brooks, Mike Fitzgerald, and Herm Winningham, in the blockbuster deal that sent Gary Carter, the greatest player in Expos history, to the Mets 17 months earlier. Despite his wildness, Youmans showed great promise in his rookie season of 1985. However, he had been struggling early in the 1986 campaign, and with a bloated 7.25 ERA, he was in danger of losing his spot in the starting rotation.4

It didn’t take long for Raines to extend his hitting streak to 12 games, as the speedster opened the game with a groundball single up the middle off Rawley. After a base hit by Mitch Webster, Andre Dawson smacked a hard grounder that would have been a double play had it not snuck through the legs of Juan Samuel for the second baseman’s fourth error in six games. Instead of a twin killing, Philadelphia had a one-run deficit as Raines motored home and Webster moved to third base. Dawson followed with a stolen base, the first of many for the Expos that day. Tim Wallach knocked in Webster with a groundout to Samuel, and then rookie Andrés Galarraga hit a groundball single up the middle to score Dawson and put the Expos in front 3-0. All three runs against Rawley were unearned.

The Phillies’ scouting report was to be patient and make Youmans throw strikes, and that’s exactly what they did in the bottom of the first inning. The leadoff batter, Milt Thompson, struck out looking to start the frame, and then Rick Schu and Samuel drew back-to-back walks. Youmans made the mistake of grooving a belt-high pitch to the cleanup hitter, Mike Schmidt, and the veteran slugger smashed a double to right-center field to score both runners. Although some might have expected the youngster to implode at that point, Youmans settled down and retired the next 12 Phillies in order. “I was rushing myself at first,” said the right-hander. “Then I slowed down, took time between pitches.”5

In the top of the third inning, Dawson hit a one-out triple and scored on a sacrifice fly by Brooks to make the score 4-2 for Montreal. The Expos extended their lead in the fifth in typical Raines fashion. After leading off with an infield single, “Rock” stole second base and third base to give him eight steals in the young season. He scored on a line-drive single to right field by Webster that put the Expos up 5-2 and knocked Rawley out of the game.

Youmans continued to pitch effectively, giving up only two hits through seven innings. Expos manager Buck Rodgers, after seeing Youmans surrender a double to pinch-hitter Greg Gross to open the bottom of the eighth, was taking no chances, so he summoned the reliable Tim Burke from the bullpen to face the top of the Phillies order. True to form, Burke set down the next three batters to maintain the three-run lead.

The Expos blew the game wide open with two out in the top of the ninth inning when Winningham, who had replaced Dawson in the bottom of the seventh inning, belted a two-run home run off Don Carman. Brooks followed by hitting a sinking line drive into center field that Thompson initially retreated on, then reversed course and made an ill-fated attempt at a shoestring catch, which allowed the ball to skip past him and roll to the wall for an inside-the-park home run.6 It was Brooks’s 21st RBI in the team’s 24th game. “The last 90 feet took two or three hours,” he quipped. “When I saw the ball get by the outfielder, I was thinking three. When the coach (Rick Renick) waved me, I had to get more air.”7

Burke retired the Phillies in order in the bottom of the ninth inning to record his third save of the season and give Montreal a sweep of the three-game set.

The fleet-footed Expos stole seven bases in the game to tie the team record, which was originally set in 1974 and equaled in 1981. Raines and Galarraga both swiped a pair, while Dawson, Webster, and Vance Law stole one each. The previous time Montreal accomplished the feat was also against Philadelphia, with both Raines and Dawson pilfering bases in that game as well.8 As of the end of the 2018 season, the franchise record for the most team steals in a game was still seven.9

The Phillies recovered from their poor start in the 1986 season, going 71-51 from May 26 onward. It didn’t matter. The unstoppable Mets won 108 games in the regular season, finishing 21½ games ahead of second-place Philadelphia. Montreal, with both Raines and Brooks in the hunt for the batting title, stayed within striking distance of the Mets until early July. Unfortunately for the Expos, Brooks suffered a season-ending hand injury later that month. Their offense sputtered in the second half of the season, and they finished in a distant fourth place with a 78-83 record. The Mets, bolstered by Carter, the former Expo, went on to win the NLCS and the World Series in dramatic fashion.

The highlight of an otherwise forgettable Expos season was the performance of Raines, who established himself as one the best all-around players in baseball. Although his hitting streak was snapped at 17 games on May 14, he succeeded in reaching base on either a hit or a walk in each of his first 41 games. Raines went on to lead the National League with a .413 on-base percentage, win a Silver Slugger Award, and make the All-Star team for the sixth time in a row. He swiped 70 bases to become the first major leaguer to steal 70 or more bases in six consecutive seasons.10 And just as he set out to do, Raines won the 1986 batting title with a career-high .334 average.

8 On April 21, 1981, Tim Raines swiped four bags, Rodney Scott stole a pair, and Andre Dawson chipped in with one. The first time the Expos stole seven bases in a game was in the second game of a doubleheader against the Cubs on September 24, 1974. Larry Lintz stole a pair in that game, while Willie Davis, Mike Jorgensen, Ken Singleton, Tim Foli, and Jerry White swiped one each.

9 As of the end of the 2018 season, the Washington Nationals had stolen seven bases in a game once. That was on June 27, 2017, against the Chicago Cubs when Trea Turner swiped four bases, Michael Taylor stole a pair, and Anthony Rendon pilfered one.

10 Tim Raines is still the only major leaguer to steal 70 or more bases in six consecutive seasons (as of the end of the 2018 season). Rickey Henderson stole 70-plus bases in seven different seasons, but he never did it more than two seasons in a row.