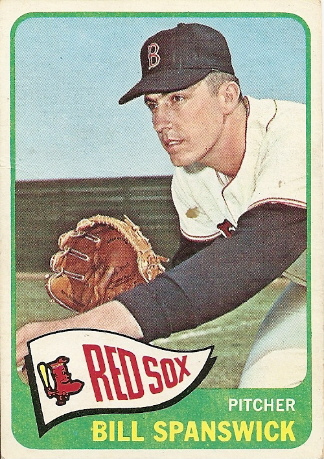 Baseball was the game for the generation of young men growing up in the post-World War II United States. They played whenever and wherever they could and closely followed “their” major league team, one usually determined by geographic proximity and radio signal strength. Those with skills that stood out pictured themselves in a major league uniform–for their team, if they got really lucky. And since games of catch were always a way for as few as two to practice, a good many saw themselves in that uniform as a pitcher, starting and winning a major league game sometime down the road.

Twenty-five-year old Bill Spanswick1 realized that dream on May 8, 1964, at Griffith Stadium in Washington. A native of Springfield, Massachusetts, who grew up in upstate Enfield, Spanswick was drafted after a year at nearby College of the Holy Cross by “his team,” the regional favorite Red Sox, in 1957.2 The hard-throwing lefty had spent six years advancing up Boston’s organizational ladder, capped by a 14-8 season in 1963 at Seattle (Class AAA, Pacific Coast League), where he’d fanned a league-leading 209 in 185 innings. He’d managed to pitch through chronic shoulder tendonitis and improved his control enough to make the Boston roster in spring training of 1964. “All winter long, from the stories I read in The Sporting News, I assumed I’d be a starting pitcher with the Boston Red Sox,” Spanswick recalled in a 1978 interview.3

The ‘64 Red Sox, coming off a seventh-place finish in 1963 under Johnny Pesky in the recently- expanded 10-team American League, were doing much the same in early May. They were 8-10 and in eighth place, percentage points out of seventh, in the tightly-packed early going. Their home-standing opponents, the Washington Senators, managed by Gil Hodges, occupied the cellar, at 9-14, as just under 7,500 came out to Griffith Stadium for a Friday night game.

The Sox had their usual Fenway Park-oriented punch, featuring Carl Yastrzemski, then in his fourth major league season; 19-year-old rookie Tony Conigliaro;4 slugging National League refugee Dick “Dr. Strangeglove” Stuart; and steady-hitting Frank Malzone. Right-hander Bill Monbouquette was the ace of a rotation from which no starter would manage a winning record in 1964; rookie Spanswick was already making his third start of the young season.

Conigliaro’s run-scoring double in the second inning and Yastrzemski’s leadoff homer in the fourth, both off Buster Narum, staked Spanswick to a 2-0 lead as he struck out the side in the first and added two more punch-outs in shutting down the Senators through four innings. But in the Washington fifth, center fielder Ken Hunt, hitting seventh, singled and third baseman John Kennedy followed with a home run to score them both and forge a tie. Spanswick had more trouble in the sixth, when a walk, single, and Hunt’s sacrifice fly to center nudged the Senators to a 3-2 lead. Although trailing, the lefty got some satisfaction when he fanned Kennedy, his eighth strikeout on the night, to end the inning.

At that point Spanswick had yielded five hits and walked four, with two wild pitches to go with the eight strikeouts. He had to figure his night was over and had to be smiling as the Red Sox erupted for seven runs for him in the top of the seventh. After Stuart struck out, right fielder Lou Clinton homered to tie the game and get Spanswick off the hook. Narum then walked Conigliaro and Bob Tillman before yielding to Hodges’ call for reliever Steve Ridzik. Gary Geiger, hitting for Spanswick, greeted Ridzik with a single that loaded the bases. Shortstop Eddie Bressoud drove in Conigliaro and Tillman with another single. After an intentional walk to Yastrzemski, Malzone got into the fun as two more runs scored when Washington shortstop Ed Brinkman botched his ground ball. Stuart finished the damage with a two-run opposite-field double.

Six-foot-six, 230-pound, Dick “The Monster” Radatz took over in the seventh and shut down the Senators on a lone hit and five more strikeouts for a classic 1960s “save.”5

Spanswick, realizing the dream of many in his generation, was in the books with his first major league win.6 He finished the season, his only one in the majors, pitching mostly in long relief, apparently having fallen out of favor with first-year Boston pitching coach Bob Turley.

“It’s a tough thing being a starting pitcher and a little wild and then being called in from the bullpen to face a left-handed batter in relief,” Spanswick recalled. “Half the time I walked him. I needed an inning or two to get my rhythm. It made me look a lot worse then I actually was.”7

Today, Spanswick, retired from a Connecticut trucking business he started after he finished up in the Pacific Coast League in 1967, lives in Naples, Florida. He remains a loyal denizen of Red Sox Nation, which was only a figment of the imagination when he was growing up in Enfield with dreams of pitching in Fenway Park.8 In 2012 he learned the Red Sox were recruiting ushers for their spring training facility in nearby Ft. Myers and signed on. “I feel good about saying I pitched in the big leagues,”9 he says. And despite his short career, the dream stuck: “When I was growing up, it was a huge deal,” Spanswick’s son Bobby recalls. “It was a thrill because everybody in our community knew he had played.”10

My long-time SABR friend, Mel Poplock, also ushers at Red Sox spring training and alerted me to the unique bookends in Bill Spanswick’s baseball journey. Fellow SABRite Gabriel Schechter was once again my research eyes and photocopying hands at the Hall of Fame Library.

2 The Braves had left Boston for Milwaukee before the 1953 season.

5 Saves did not become an official MLB statistic until 1969. Although none of the 1964 Red Sox starters had a winning record, Radatz was 16-9 in 157 innings, all in relief. He led the American League with 67 games finished and 29 saves, the latter retroactively determined by Baseball-Reference.com.

6 His only other win came on June 28, in relief against Cleveland at Fenway Park.