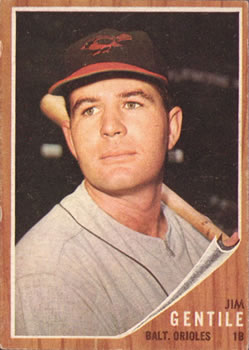 On Tuesday, May 9, 1961, before a crowd of 4,514 fans at Minnesota’s Metropolitan Stadium, the Baltimore Orioles played an afternoon game against the Twins. Baltimore’s record was 12-10, while Minnesota’s was 11-11. This game was Baltimore’s first in Minnesota, as the Twins franchise moved from Washington after the 1960 season.1 If any of the fans showed up in the third inning, they had already missed witnessing history being made, as Baltimore slugger Jim Gentile hit two bases loaded home runs in consecutive at-bats, in the first and second innings, to tie a major league record. Not only were they on consecutive at-bats, they were on consecutive pitches!

In the top of the first, Twins hurler Pedro Ramos walked right fielder Whitey Herzog, gave up a double to center fielder Jackie Brandt, and then walked third baseman Brooks Robinson. That set the stage for first baseman Jim Gentile. After the game, Diamond Jim described his at-bats. “In the first inning, Pedro Ramos … had two strikes on me and he threw me a pitch that was up around my chin and not quite as fast as I expected…. At the last minute I lashed out to upper-cut the ball, and even though Ramos had made me hit the pitch he hoped I would hit, the ball sailed over the fence in centerfield.”2 Officials estimate the shot to have traveled at least 430 feet.3

Ramos gave his version: “I am in trouble, so I try to pitch inside. But I make it too good. I look up, and the ball, she is over the center-field fence.”4 So, four batters into the game provided Baltimore with a 4-0 lead. Ramos retired the next three Orioles to end the inning. The Twins has one base runner on a leadoff single by shortstop Zolio Versalles in their half of the first but did not score.

In the second frame, after an out by second baseman Marv Breeding, Orioles pitcher Chuck Estrada singled to right field. Paul Giel was brought in from the bullpen to relieve Ramos. He proceeded to walk Herzog, as the top of the order was up again. Brandt reached on an error by Giel, allowing Estrada to score and both Herzog and Brandt moved up a base. Robinson again drew a few pass, and Gentile strode to the plate. In his words, “In the second inning, Paul Giel threw me another pitch that was good. I don’t know whether it was a screwball or a slider, but I know it fooled me for an instant. As it broke away from me, I swung and I wasn’t trying to hit it out…. I was really surprised when I got my bat around enough to pull it over the right field wall.”5

Al Costello, a writer for the Baltimore Sun, described the blast with: “This time Gentile hit the first pitch to right field, over the 360 mark by a goodly 30 or 40 feet, two-thirds of the way up into the bleachers.”6 The same quartet7 scored as in the first inning. Jim stated, “[Manager Paul] Richards normally didn’t say anything, but when I came back to the dugout after the second one, he looked at me and said, ‘Son, I don’t think that’s ever been done.’”

Gentile had become the fourth ballplayer to hit two grand slam home runs in the same game and the first to hit them on consecutive at-bats. The eight runs plated by Gentile established a new record for the most runs driven in by a batter in two consecutive innings.8 Before the Twins had retired five batters, they were down 9-0.

The Twins mounted a small comeback in the bottom of the fourth inning. First baseman Don Mincher walked to lead off for the Minnesotans. After pinch-hitter Elmer Valo flied out to right, right fielder Bob Allison homered, a mammoth blast to left field. Second baseman Billy Gardner grounded to short and then Hal Naragon, who had pinch-hit for Giel in the second, launched a deep home run over the fence in right-center field. Versalles singled and Twins centerfielder Lenny Green doubled to center. Estrada struck out left fielder Dan Dobbek to end the inning, but Minnesota had notched three runs on the board.

Bill Pleis came on as the fourth Minnesota pitcher in the top of the fifth (Don Lee had pitched two scoreless innings after Giel). Pleis walked the first man he faced, catcher Gus Triandos. Shortstop Ron Hansen followed with a home run, deep down the left field line. That made the score 11-3, in favor of the Orioles. It stayed that way until the top of the eighth inning, when Earl Robinson pinch-hit for Herzog. He singled up the middle and Brandt followed with a double to left field, advancing Robinson to third. Brooks Robinson sent a fly ball to center field which Dobbek caught, and Earl Robinson scored on the sacrifice fly. Brandt scampered to third on Brooks Robinson’s sacrifice and he came home on Gentile’s sacrifice fly, a pop fly to left that was fielded by the shortstop Versalles. Baltimore 13, Minnesota 3.

In the bottom of the ninth, Paul Richards swapped out five players in a merry-go-round that filled the score card. Earl Robinson stayed in the game, playing right field. Jim Busby went to center, batting in Gentile’s place. Walt Dropo came on play first, batting in the pitcher’s spot. Gordon Jones came in from the bullpen to pitch, and he would bat in the fifth spot, where Dick Williams was. Russ Snyder went to play left replacing Williams, batting in Brandt’s position. After this was settled, Allison led off for the Twins and parked the ball far beyond the left-center fence for his second home run and third run batted in of the game. Harmon Killebrew added a solo home run for the home team in the bottom of the ninth, and that was all the scoring.

Gentile finished with nine RBIs as the Orioles beat the Twins 13-5. Home runs accounted for fifteen of the game’s eighteen runs. The first five batters in Baltimore’s lineup accounted for eight of their eleven hits. The Twins used six pitchers “in an attempt to halt Baltimore’s batting rampage.”9 Orioles pitcher Wes Stock was Chuck Estrada’s roommate in 1961. After the game, Stock said, “I told Gentile, ‘I could win 20 games if you hit two grand slams a game for me.’ But he never did. I hope Estrada sends Gentile a case of beer every year on the anniversary of that game to thank him.’”10

“I was the most surprised man in the world when I was told I had set three major league records when I hit those home runs in the first two innings,”11 wrote Diamond Jim, in an article he penned in the Baltimore Sun. The nine runs driven in by Jim Gentile set a new Oriole high for one game. The previous club record of seven RBIs had been jointly held by Gentile and Triandos.12 Through the first 22 games of the 1961 season, Gentile was in the zone, batting .338 and slugging .738 with an OPS of 1.215.

Norman Boyles, a Greensboro, NC, mathematician, calculated the odds of hitting two grand slam home runs in a player’s first two times at bat to be 6,581,192-to-1.13 A week before Gentile’s accomplishment, Chuck Weatherspoon of the Class B Wilson Tobs had turned the trick. According to the Baltimore Sun, “After that feat, Boyles put his mathematics to work and thus had the figures at hand when Gentile connected.”14

The Baltimore Orioles hit a total of five grand slam home runs in 1961. Each one was off of Jim Gentile’s bat, including the two on May 9.15 This established an American League record which stood until 1987. 16

“May 9, 1961 Baltimore Orioles at Minnesota Twins Box Score and Play by Play,” http://baseball-reference.com/boxes/MIN/MIN196105090.shtml

“Jim Gentile Becomes the First Major League Baseball Player to Hit a Grand Slam in Back to Back Innings,” todayifoundout.com/index.php/2012/05/jim-gentile-becomes-the-first-major-league-baseball-player-to-hit-a-grand-slam-in-back-to-back-innings/