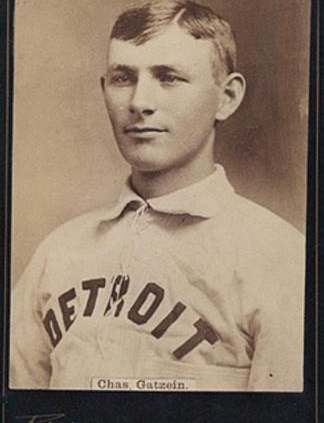 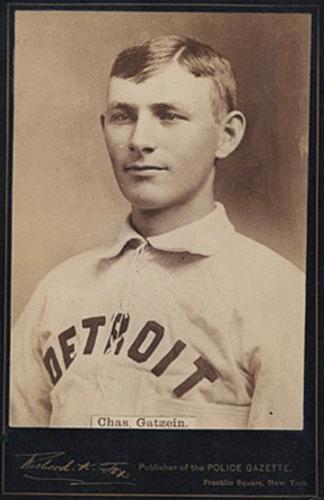 “Detroit’s German battery proved to be a terror to the Philadelphia batsmen,” wrote the Philadelphia Times of the Detroit Wolverines’ 1-0 victory over the visiting Quakers in a rain-shortened contest.1 Charles “Pretzels” Getzien fired a no-hitter while catcher Ed Gastfield was involved in 14 of the 18 outs recorded.

There weren’t too many bright spots for Jack Chapman’s last-place Wolverines (25-79), a whopping 54½ games behind the NL-leading Providence Grays as they concluded a miserable season with a 19-game homestand. One indicator of a better future was 20-year-old German-born hurler Pretzels Getzien, whose moniker arose not from his Prussian background, but rather from his “puzzling twisters,” noted Sporting Life.2 Opposition batters described “the course of the ball from his hand to their bats as a ‘pretzel curve.’”3

Making his big-league debut on August 13 en route to a misleading 5-12 record and the league’s third-lowest ERA (1.95), the right-handed recruit from Chicago turned heads with a knee-bending curveball that broke off the plate, a 12-6 drop curve, and a heater.4 The NL had lifted all restrictions on pitching deliveries in 1884; the introduction of overhand pitching gave rise to hard throwers like Getzien. Pitchers began their delivery from the back of a 4-foot by 6-foot box, the front of which was 50 feet from home plate.5

It had also been a forgettable season for legendary baseball pioneer Harry Wright, whose Quakers (37-67) were in sixth place but, like the Wolverines, possessed a rookie ace. Described by Paul Hofmann in the SABR BioProject as the “greatest forgotten star of the late 19th century,” 21-year-old right-hander Charlie Ferguson was headed to a 21-25 record and the sixth most innings pitched (416⅔) in the league.6 “He had a magnificent arm, clear eye, pluck, and control,” wrote Al Spink, founder of The Sporting News. “He could throw a ball with terrific speed.”7 (But Ferguson was also a tragic story: After just four seasons and 99 victories, he died from food poisoning in 1888 at the age of 25.)

The second game of the four-game Wolverines-Quakers series took place on a dark, dreary Wednesday afternoon with temperatures hovering around 60 degrees.8 The “attendance was small,” noted the Times, as few patrons ventured to Recreation Park, located at Brady and Brush Streets on the north side of Detroit, in what is now called Midtown.9

Getzien twisted Philadelphia into fits in an overpowering performance. Through six innings, he did not yield a semblance of a hit. He fanned 10 batters: two in every inning except the fourth. According the Detroit Free Press, his assortment of pitches produced 33 swings and misses (compared with 11 for Ferguson) and seven called strikes.10

Philadelphia managed only one ball out of the infield against Getzien, a fly out to right field. There were three infield popups and four groundouts, three of which were tappers in front of home plate that catcher Gastfield picked up and tossed to first.

Getzien’s only hiccup occurred in the second when he issued a leadoff walk to Tom Lynch. Ferguson reached on third baseman Charlie Bennett’s error to put two on with no outs. (Normally a catcher, Bennett was at third for the only time in 1884.) But Getzien fanned Ed Andrews and punched out Sid Farrar — after which Gastfield rifled a strike to second base to catch Lynch napping for the inning-ending double-play.

As was customary at the time, the host club had the choice to bat or take the field to start the game. After Detroit opted to bat first, Wolverine George Wood led off the game by belting one of his team-high 10 triples for the season. He tried to score on Henry Jones’s fly to center, but Lynch threw a perfect strike to catcher Andy Cusic to erase him at the plate.

The Wolverines missed another scoring chance in the third. Bennett led off with a single and moved to second when third baseman Joe Mulvey fumbled Stump Weidman’s grounder. Ferguson helped his own cause by scooping up consecutive sacrifice bunt attempts and getting force outs at third. He then retired Getzien to end the rally.

Gastfield led the Wolverines’ charge in the third by reaching on another error by Mulvey and stealing second. Ned Hanlon laced a two-out single to left to drive in Gastfield for a 1-0 lead. He moved to second on Blondie Purcell’s throw home and to third on a passed ball, but was left stranded there.

There was a bit of commotion in the top of the sixth when Ferguson’s pitch injured catcher Cusic by knocking his right thumb out of joint.11 The game was delayed 12 minutes while Wright called in rookie Jim Fogarty to take over center field and Lynch donned the tools of ignorance. (Apparently Fogarty was not in uniform and had trouble putting it on.12)

It had been drizzling for several innings by the time Milt Scott and Getzien led off the seventh with singles. When the rain suddenly intensified, umpire Stewart Decker interrupted the game as players ran for cover in their respective dugouts. After waiting 30 minutes, Decker declared the game official. “It did not rain very hard nor very long,” opined the Free Press, but Decker considered the ground too wet and the afternoon too dark to resume play. Game action from the top of the seventh was nullified and the Wolverines were 1-0 victors; the game lasted 1 hour and 10 minutes.

Epilogue: If there ever was a Year of the No-Hitter, it was 1884. Getzien’s abbreviated six-inning masterpiece was one of 12 no-hitters that season, four of which lasted less than nine innings. The eight regulation, nine-inning no-hitters (four in the American Association and two each in the NL and the Union Association) is still a record (as of 2020) for most no-nos in one season.

Getzien belonged to the ranks of no-hit pitchers for more than a century. In September 1991 the Committee for Statistical Accuracy altered the definition of a no-hitter to include only those games that last at least nine innings and end with no hits. An estimated 36 abbreviated no-hitters were removed from the list, including Getzien’s. Pretzels won 145 games in his big-league career, including 11 shutouts, but never threw another no-hitter after that rainy day in the fast-growing metropolis on the Detroit River.

4 “How Men Pitch Base-Ball: The Famous Pitches of the National League of 1886,” published in Bill James and Rob Neyer, The Neyer/James Guide to Pitchers (New York: Fireside, 2004), 217.

9 “Rain Stopping the Game at Detroit — The Philadelphias Beaten.”