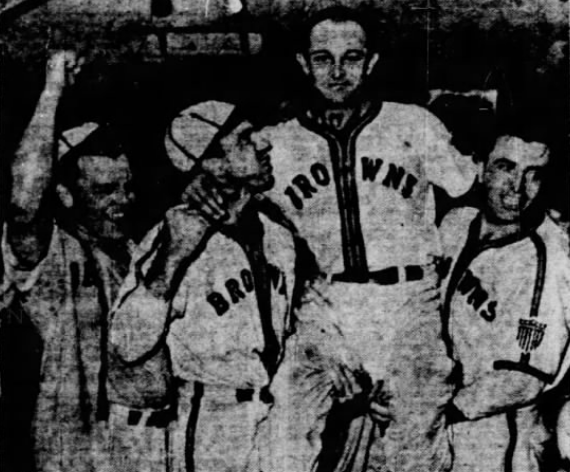 Chet Laabs of the St. Louis Browns is carried off the field by his teammates after hitting two home runs in the Browns’ pennant-clinching victory over the Detroit Tigers on October 1, 1944. (St. Louis Star/Newspapers.com)

By October 1, 1944, the United States was fully engaged in World War II. War had raged for almost three years on opposite ends of the world, far from home. In a conflict that saw over 16 million Americans serve, almost 400,000 of them were killed in action.1 The American public was becoming wearily accustomed to daily news of the deaths of young men in the defense of their country.

With this as the backdrop, the national pastime continued. In fact, the president of the United States insisted on it. In his famous Green Light Letter of 1942, Franklin D. Roosevelt shared his thoughts with Commissioner Kenesaw Mountain Landis, saying, “I honestly feel that it would be best for the country to keep baseball going. There will be fewer people unemployed and everyone will work longer hours and harder than ever before. And that means that they ought to have a chance for recreation and for taking their minds off their work even more than before.”2

While Roosevelt expressed his enthusiasm about the good the game could do for the morale of the country, winning the war was the first priority. Those ballplayers who could reasonably serve in the armed forces did, leaving behind decimated major-league rosters by 1944. In fact, by Opening Day 1944 only 40 percent of those in the Opening Day lineups in 1941 were still in the majors, and several more were awaiting the call to duty. Seventeen of those who participated in the 1942 All-Star Game and 13 from the 1943 contest were now serving in the military.3

By any means of measurement, the quality of the game on the field was suffering. Those suiting up for the 1944 season were largely considered physically unable to serve in the military (4-F), were too old, too young in a few cases, or had families to support. Teams scoured the landscape looking for capable players.

Despite the turnover, there were some predictable results. On September 21, 1944, the St. Louis Cardinals clinched the National League title, their third in a row. This was not unexpected, as it was also their third consecutive season with 100 or more wins. They won the flag in dominant form, residing in first place all but three days of the season.

The American League pennant was also going through St. Louis, but this was not expected. The Browns had a long history of mediocre baseball, having never won an AL title, and rarely even contended for one. In fact, the team had not finished within 15 games of first place in 22 years.

This Browns team, though, looked different from the start, as they shot out of the gate with nine victories in a row. A long-suffering fan base needed to be convinced at first; on April 27 the hometown team ran its record to 8-0 in front of a mere 1,106 spectators at Sportsman’s Park.

The Browns did come back to earth but throughout the summer, which included a suspension of play during the D-Day invasion, they battled Detroit, New York, and Boston for the pennant. On September 3 all four squads were all within 1½ games of one another. The Sporting News adorned the front page of its September 14 issue with the headline “AL Pennant Race Most Dramatic in History.”4Eventually the race came down to the Detroit and St. Louis. On Sunday, October 1, the last day of the regular season, the Tigers and Browns woke up tied for the American League lead. The Tigers were sending out ace Dizzy Trout, who had already won 27 games, in their season finale against last-place Washington.

The “Sewellmen,” led by manager Luke Sewell, had a bit of a longer hill to climb. They would face off against the defending champion New York Yankees, still a formidable foe (83 wins) despite having fallen out of the race. The Yankees would send out rookie Mel Queen with the intent of spoiling the Browns’ pennant chances.

Taking the mound for the Browns was 34-year-old Sig Jakucki. One year earlier, the right-hander was working at shipyards in Houston. Prior to this season, he had last pitched in the major leagues in 1936. “He was a mean son of a bitch, a big strong bastard that would turn over a juke joint every night if he could,” teammate Ellis Clary said of Jakucki. “But you could not help but like him if he was on your side.”5 Jakucki had a reputation as a carouser, but was an effective pitcher, with a 12-9, 3.67 record up to this day.

Jakucki took the mound in front of a sellout crowd, the first in 20 years, of 35,518, with some accounts of an additional 15,000 turned away.6 The Yankees were poor guests and started the scoring immediately with an RBI single by Johnny Lindell in the first inning. They added another when Hersh Martin doubled in Bud Metheny in the third. In the bottom of the fourth the Browns pulled even when Chet Laabs, whom Sewell almost benched before reinstating him after watching him in batting practice, followed a single by Mike Kreevich with a two-run homer to make it 2-2.

Shortly after Laabs’ blast, the scoreboard informed the players and faithful that Detroit had lost to Washington, 4-1, and the pathway to the AL pennant was now clear. Just win, and take the elusive pennant for the first time ever. The Browns didn’t waste any time; Laabs went deep again, this time a 400-foot shot, to give St. Louis a 4-2 lead. Vern Stephens ripped a solo homer of his own leading off the eighth.

This would be all they would need as Jakucki held the Yanks scoreless the rest of the way. After 1 hour and 38 minutes of play, New York’s Oscar Grimes fouled out to first baseman George McQuinn to end the game.

As reported in The Sporting News, “After McQuinn clutched Oscar Grimes’ foul for the last out, the crowd was dazed for the moment. Then it let out a terrific shout. However, as it was Sunday and the third year of our entry in World War II, there was no aftermath like the wild celebration in St. Louis after Hornsby’s Cardinals clinched their first National League pennant in 1926. … With thousands of young fans of the harum-scarum age in the armed services, and gasoline rationed, there were not many youthful spirits on hand to repeat the Hellraising of 18 years ago.”7

Thus set into motion “The Streetcar Series” against their city mates. The week of the World Series was proclaimed as St. Louis Baseball Week by Mayor Aloys Kaufman. The series created great civic interest; tickets went quickly, and were sometimes scalped at significantly inflated prices.8

The first order of business prior to the first pitch was to deal with accommodations. With wartime housing not always plentiful, Sewell and Cardinals manager Billy Southworth had shared an apartment during the season. Since the teams never playing in town at the same time during the season, there was never a conflict. Now there was. Southworth found another apartment for the Series.9

The Series looked to be a mismatch from the start, with the 105-win Cardinals, who led the majors in most team batting and pitching categories, matching up against perhaps the worst  pennant winner in history. The Browns’ 89-65 mark was tied with that of the 1926 World Series champion Cardinals for the worst record of a pennant-winning team. The Browns were playing to win, though, and Sewell was confident. “Billy (Southworth) has a mighty good team; they must be good to win over 100 games for the third straight season,” he said. “But I think we can show them some pitching that might bother them.”10

Would the “Team of Destiny,” as labeled by Fred Leib, be able to generate four more wins and shock the baseball world? The Browns were sure of it. “Now, bring on those Cardinals.”11

Sources
In addition to the sources cited in the Notes, the author also consulted Baseball-Reference.com, Retrosheet.org, and David E. Skelton’s SABR BioProject entry on Chet Laabs.

11 Leib. The Browns came into the World Series confident, and took two of the first three games, with the loss coming in extra innings. The Cardinals took over though, and allowed only two Browns runs over the last three games to take the Series in six games.