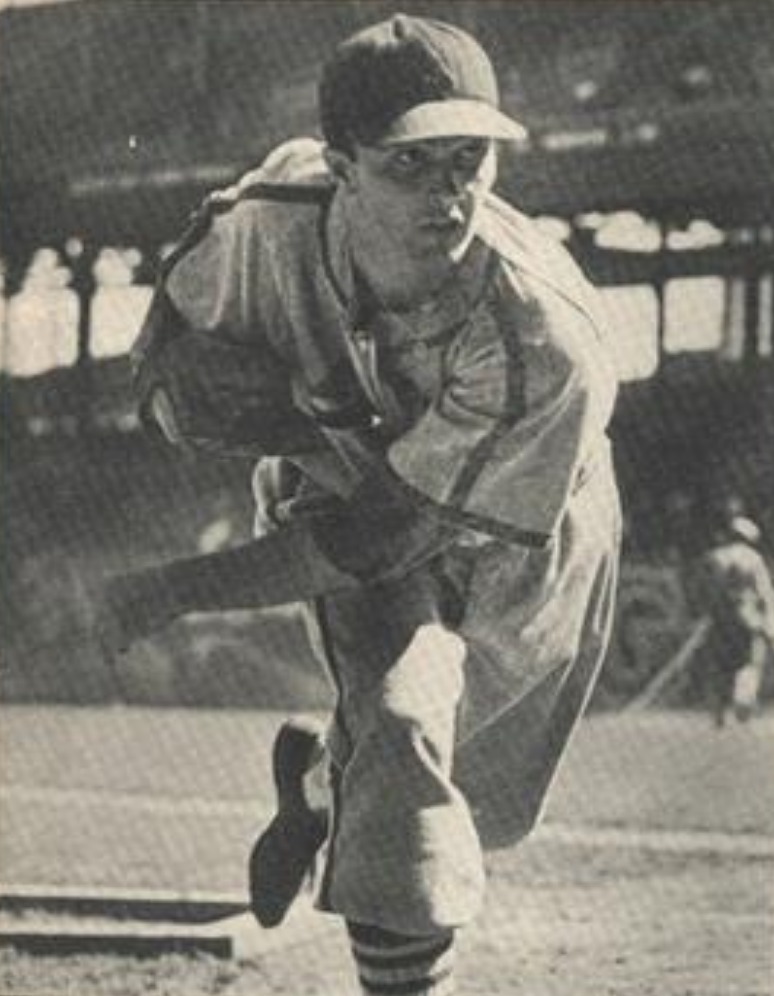 Going into the last day of the 1946 baseball season, Brooklyn and St. Louis were tied for the National League lead with identical 96-57 records. When each team lost on that day, the Dodgers to the Braves and the Cardinals to the Cubs, it became necessary for the teams to engage in the first-ever playoff to determine the pennant winner. The powers-that-be elected to have a best-of-three series with the first game scheduled at Sportsman’s Park in St. Louis on October 1, 1946.

As noted in the New York Herald Tribune, “A dozen or more photographers and about fifty writers lent a semblance of World Series importance. Four umpires officiated (three was the norm during the regular season).”1

The Cardinals had won 14 of 22 regular-season meetings with Brooklyn and were hoping to maintain that edge in the playoff. First-year Cardinals manager Eddie Dyer, a Branch Rickey disciple who had taken over at the beginning of the season for Billy Southworth, chose Howie Pollet to take the mound for the Cardinals against Brooklyn’s young Ralph Branca. The 20-year-old Branca was in his third season with Brooklyn and had started nine games during the 1946 season. He was 3-0 coming into the game and had pitched two shutouts, including one over the Cardinals, during the September stretch drive.

Pollet, the Cardinals ace, was pitching in pain after pulling a muscle in the left side of his back in a prior start. He had not been particularly effective down the stretch, notching his 20th win on September 17 and failing to add to that number in his two remaining September starts, in which he was knocked out of the box on each occasion.

The Tuesday-afternoon encounter drew a paid crowd of 26,012, about 8,000 short of capacity, but a strong showing considering that there was virtually no advance sale of tickets. Most of the empty seats were in the bleachers.

The Cardinals broke out on top in the first inning. Team captain and center fielder Terry Moore singled over shortstop with one out and advanced to third base on a single by Enos “Country” Slaughter that just eluded the grasp of Dodgers second baseman Eddie Stanky. With two outs, young catcher Joe Garagiola stepped to the plate. Garagiola hit a grounder between third baseman Cookie Lavagetto and shortstop Pee Wee Reese. By the time Reese grabbed the ball and threw to first, Garagiola had arrived safely, just beating the throw. Moore scored on the play. Dodgers manager Leo Durocher argued the call with arbiter Babe Pinelli to no avail. There was no scoring in the second inning, and the Dodgers knotted the score on a leadoff home run to the left-field bleachers by Howie Schultz leading off the top of the third. But the tie did not last long.

In the bottom of the third inning, Stan Musial walked, was singled to third by Slaughter and scored when Whitey Kurowski’s grounder forced Slaughter at second base. Garagiola’s second single in as many at-bats advanced Kurowski to second base, before Whitey scored on a single by Harry “The Hat” Walker, brother of Brooklyn right fielder Dixie Walker. Walker’s single made it 3-1 and spelled the end for Branca. Durocher brought in Kirby Higbe, who escaped the inning without further damage, thanks to a defensive gem by Stanky on a hard-hit ball to second by Cardinals shortstop Marty Marion.

Pollet was in command and through six innings and kept the lead intact. The Dodgers mounted a threat in the fifth, loading the bases on singles by Reese and Bruce Edwards and a walk to Stan Rojek, but the threat came to a halt when Stanky grounded into an inning-ending double play, started by Red Schoendienst. Rojek did everything in his power to thwart Marion’s throw to first base, but the great Cardinals shortstop was able to complete the double play. It was the second of three double plays that the Cardinals would use to snuff out potential Dodger rallies during the game’s first six innings. John Drebinger of the New York Times provided the following analogy concerning hitting a ball toward the Cardinals’ middle infielders: “[N]ext to ramming your head against a concrete wall, there is no surer way to bring an immediate halt to whatever it is you are trying to do.”2

The Dodgers completed their scoring for the day in the top of the seventh inning. With one out Reese and Edwards hit back-to-back singles, and then Reese scored on Schultz’s single to center field, which cut the lead to 3-2. However, the Cardinals defense once again frustrated Brooklyn when Slaughter cut down Edwards trying to advance from first to third on Schultz’s single.

The Dodgers used pinch-hitters for their pitchers in the fifth and seventh innings, and by the bottom of the seventh the Dodgers’ fourth pitcher, Vic Lombardi, was in the game. Stan Musial greeted Lombardi with a triple off the right-field screen and held at third base when Slaughter’s fly ball to short left field was caught by Ducky Medwick, who had played with St. Louis during the years of the Gas House Gang, winning the Triple Crown and being selected the National League MVP in 1937. The ever-impatient Durocher removed Lombardi from the game at that point and brought in Rube Melton. Melton recorded the second out of the inning before Garagiola, on an 0-and-2 pitch, looped a ball over the infield and out of the reach of Lavagetto and Reese. It went into left field for his third single of the game, driving in Musial with the Cardinals’ last run.

Pollet stranded two Dodgers in scoring position in a scoreless eighth inning when Marion at shortstop ranged to his right to intercept a dart hit by Brooklyn’s Carl Furillo for the final out of the inning. Pollet retired Reese and Edwards for the first two outs of the ninth inning before Howie Schultz stepped in. Schultz had already propelled the Dodgers offense with a homer, sacrifice bunt, and an RBI single. What was left in his bat? Not enough. This time around Pollet struck out Schultz. The Dodgers went in order in the ninth inning and Pollet had his 21st win of the season. The loss in the game, which was completed in 2:48, went to Branca. (Statistics from these playoff games became part of the 1946 season record.)

The ever-resilient Dodgers fans had listened to the game on radio at any number of places in the borough.  Brooklyn Borough President John Cashmore urged all firms in Brooklyn to allow their employees to listen in, saying, “Collective rooting of the borough will bring us victory and prepare us for the tremendous parade and celebration when the Dodgers win the pennant.”3 At game’s end, one fan at a local watering hole was heard echoing a familiar refrain, “Wait till we get them Cards at Ebbets Field!”4

Pollet’s 21st win made him the league leader in that category, and his 2.10 ERA also led the league. He was the NL ironman, too, pitching 266 innings.

Branca, whose loss was his only one of the season, would once again take the mound in playoff competition in 1951, starting and losing the first game and facing only one man — Bobby Thomson — in the fateful third game.

Registering the most hits for St. Louis on October 1 were Terry Moore and Joe Garagiola. Although Moore would play two more years with the Cardinals, he wasn’t the same player as he was before missing three seasons during World War II. Although greatness eluded Garagiola on the playing field, his self-deprecating sense of humor and engaging personality took him to a very successful career as a writer, broadcaster, and television personality.

Schultz, the Dodgers’ hitting hero of the game, had started his last game at first base for the Dodgers. Relegated to the bench and having appeared as a late-inning substitute in only two of his team’s first 16 games, he was sold to the Philadelphia Phillies on May 10, 1947.

The Cardinals and the Dodgers were the two most dominant teams that played in the National League from 1926 through 1968. The teams were particularly dominant from 1941 through 1949, winning seven of nine pennants between them. During these years, the Cardinals finished first or second in every season, winning four pennants and three World Series. They passed the torch of league domination to the Dodgers. It was no coincidence that Branch Rickey played a significant role in molding each of the teams whose paths crossed in 1946 with the Cardinals (Rickey’s first dynasty) about to win their ninth pennant in 21 years, and the Dodgers (Rickey’s second dynasty) one year away from a series of 20 seasons that would see them win 10 pennants and four world championships.

In addition to the sources cited in the Notes, the author used Baseball-Reference.com and the following: